Two years ago, Max Harwood made a video in his bedroom.

A second-year student at a musical theater school in London, he introduced himself and said where he was from. He talked about how, as a child, he would don a bouffant wig and perform Rizzo’s songs from “Grease,” making his grandmother laugh so hard that she nearly wet herself.

That minute-long video was Harwood’s first audition for the movie “Everybody’s Talking About Jamie,” an adaptation of the sparkly West End musical about a teenager in the north of England with dreams of being a drag queen. Seeking new talent, the producers held an open call, which yielded thousands of tapes. Jonathan Butterell, the film’s director, watched nearly all of them, and Harwood’s stood out immediately.

“He had this kind of magic about him,” Butterell recalled. “He is fabulous without being arrogant.” He called Harwood back six more times, for dance calls, for recording sessions, for chemistry reads, for drag challenges. The magic didn’t fade.

So now Harwood — who had no professional credits, couldn’t get into a first-class drama school and had been told that he should aim for ensemble parts — is filling some very high-heeled shoes. His ice-blonde crop and princeling looks occupy nearly every frame of “Everybody’s Talking About Jamie,” which premieres on Amazon Prime Video on Friday.

“I’ve had a process with this film where I’ve stepped into my queerness and my comfortability,” Harwood, 23, said on a recent evening while lolling on a sofa at the Crosby Street Hotel in New York. “This is who I am.” 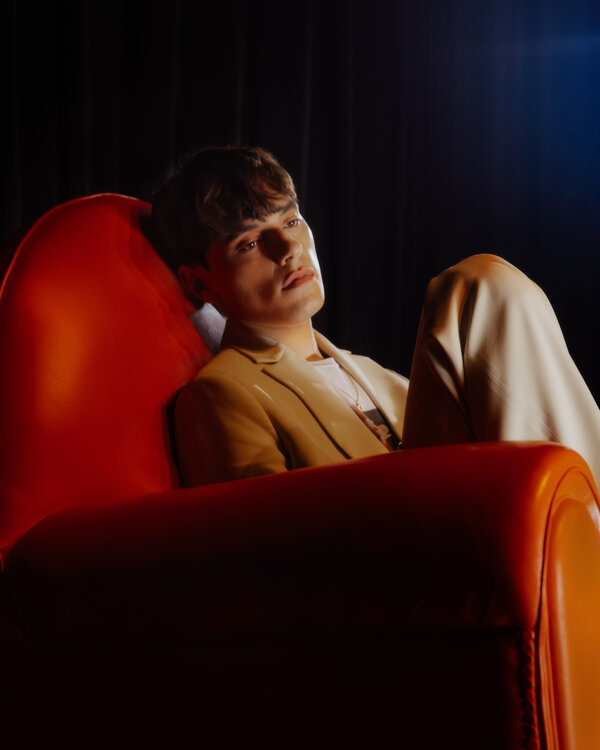 Harwood had arrived in the city the previous day, driving in from the Hamptons on a whistle-stop press tour for the film. The tour had taken him across America — which, mid-pandemic, mostly meant airports and hotels.

He has louche, generous features, the outsize eyes of a startled deer and an unforced warmth. He wore a spotted T-shirt. And if his Converse sneakers lacked the pizazz of the glittery heels that Jamie covets, they did have platform soles. He carries himself like the dancer he trained to be, which makes him seem taller than 5 feet 10 inches.

He grew up in Basingstoke, a town in south central England without a professional theater company. He knew he wanted to act, even if the drama schools that he applied to didn’t see it the same way. But his local theater society gave him a scholarship for a one-year course at the Guildford School of Acting. The teachers there weren’t entirely encouraging.

“I was told that if I wanted to do musical theater, because of how I looked, I would be typically cast in the ensemble, and I needed to get my dancing up,” Harwood said. What exactly was wrong with his looks? “I’m not, like, the strapping leading man.”

He was directed to the Urdang Academy, a musical theater training program in London. Although he enjoyed the classes, he struggled there. He wanted to stand out, and the work of an ensemble member, who has to look and dance just like everybody else, never suited him. He wasn’t supposed to audition during the program, but he had seen “Everybody’s Talking About Jamie” onstage, and had loved the sight of a story centered around a young gay man that didn’t depend on trauma.

“He didn’t die at the end,” Harwood said. “He wasn’t comic relief. He didn’t come in for two scenes to be the gay best friend. And that was really nice.”

So, when a friend told him about the open call for the movie, he put himself on tape. During the months of auditions that followed, he kept up with his schoolwork and his part-time job as a supervisor at a sneaker store. He never really thought that Butterell and the producers would cast him, but when he was called back for a day that involved a full drag makeup test, he let himself dream.

Butterell had conceived the musical after watching the BBC documentary “Jamie: Drag Queen at 16,” which followed Jamie Campbell, an English teenager who wanted to wear a dress to prom. “Everybody’s Talking About Jamie” opened in Sheffield, in the north of England, and quickly transferred to the West End in London. In The New York Times, the critic Ben Brantley called that production a “determinedly inspirational show.”

In adapting the musical for the screen, Butterell and the other creators, the writer Tom MacRae and the composer Dan Gillespie Sells, didn’t want a strapping leading man to play Jamie. “Because what’s radical about Jamie is the fact that you’ve got an authentically effeminate male hero,” Gillespie Sells said in a phone interview. “That’s something you don’t see very often.”

The creators saw it in Harwood. When Butterell told him that he had the part, Harwood screamed, swore and asked if he could call his mother.

“Everybody’s Talking About Jamie” isn’t a coming out story; Jamie is out already. Instead it’s a tale of stepping confidently into your identity, in appropriately glamorous footwear. Jamie’s story isn’t really Harwood’s. Though Harwood liked playing dress-up, he never felt compelled to perform drag. But then again, maybe it’s everyone’s story: Doesn’t everyone want to be seen for who they really are?

The dancing came easily to Harwood, and so did the songs, which are mostly pop- and R&B-inflected. Gillespie Sells praised his voice: “It was exactly that thing, that very pure, young male, perfect pop voice that was so good for Jamie because Jamie is pop personified. Everything about him is bright and hopeful.”

Harwood didn’t always feel hopeful. Butterell, however, never doubted him. Neither did his colleagues, including Richard E. Grant, who gives a moving performance as Jamie’s drag mother. “He looks very young, sings and dances to the manner born, is emotionally open and giving, instantly likable, and of course, has talent by the bucket load,” Grant wrote of Harwood in an email.

But there were moments — such as a scene between Jamie and his best friend, Pritti (Lauren Patel) — when Harwood worried whether he could deliver the right performance. He felt frightened. He felt vulnerable. Butterell took him aside and told him to breathe. Maybe in these moments Jamie felt vulnerable, too, Butterell suggested.

The day they shot Jamie’s drag performance was even more anxiety-inducing, but Jamie Campbell, the musical’s inspiration, happened to be on set that day. “And I said to Jamie, ‘I’m so scared, I’m so scared,’” Harwood recalled. “And he was like: ‘You’re in exactly the right place. And if you weren’t in that place, you would not be human.’”

So Harwood’s anxiety became Jamie’s anxiety, which layers the musical’s sequins and chiffon with a febrile authenticity. If the film is about Jamie coming into his own, it’s also about Harwood doing the same. “Max went on a similar journey to what Jamie’s going through,” Butterell said. “Max went looking for who he was in this. Where Max and Jamie meet is in this duality of sheer joy and the fear that you have to step through to maintain that joy.”

Starring in a movie musical as your first professional gig is one more joy. But even a decade ago, young queer actors might have fretted about being birthed into the industry in a role like Jamie, because it could lead to a typecast future. That doesn’t bother Harwood. He believes in Jamie’s story, which he describes as “a little beacon of light and hope and joy.”

Sprawled on that couch in New York, he said that story, however universal, is only one story — and queer youth deserve more. “I’m really happy to be a voice for my community,” he said. “But there are so many more stories to be told.”