In this naturalistic drama from Spain, a family confronts the impending loss of its generations-old farm. 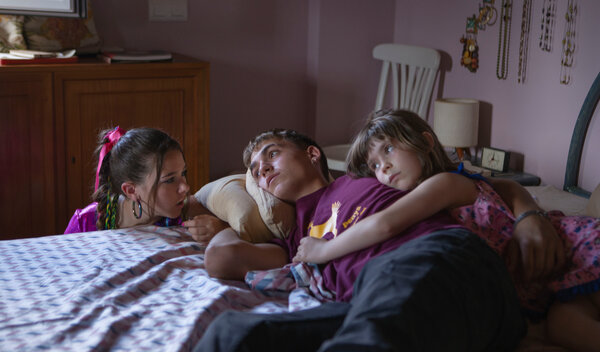 Inside a car at the edge of a peach orchard, three children shoot finger-pistols at imagined aliens, when a crane rumbles into view, interrupting their extraterrestrial fantasies with earthly terrors. In “Alcarràs,” the second feature from the Spanish filmmaker Carla Simón, a Catalan family’s loss of their farm is an upheaval of cosmic proportions.

As the film opens, the Solé clan realizes that the neighborly handshake that sealed their ownership of the land decades ago no longer holds water; the current landowner plans to raze their trees and build a solar farm. As the family undertakes its final harvest, the middle-aged man of the house, Quimet (Jordi Pujol Dolcet), spirals into a manic frenzy and quarrels with his brother-in-law, who decides to take the landowner’s offer of a job. Tiffs break out between Quimet and his sisters, while his kids — including the tall, industrious Roger (Albert Bosch), and the teenage Mariona (Xènia Roset) — embark on their own small rebellions.

Simón and her cast of nonprofessional actors achieve a luminous naturalism. Scenes rush and flow into each other, and subplots emerge and fade like ripples in a pond, as the focus floats languidly from one character to the other. The film is a flurry of chatter and labor — picking, digging, lifting, hunting — that drives home the centrality of the farm to the family’s sense of time and togetherness.

If “Alcarràs” feels as delicate as a summer afternoon, it can also feel as slight: Simón only occasionally zooms out of the Solés’ tight-knit world to show us the political stakes of their predicament. Yet the film’s striking images — a girl’s made-up face, sullen amid a crowd of colorful revelers; solar panels gleaming sinisterly below a full moon — leave an indelible trail.

Alcarràs
Not rated. In Catalan, Spanish and English, with subtitles. Running time: 2 hours. In theaters.