Home » TV and Movies » ‘All Quiet on the Western Front’ Review: The Spectacle of War

‘All Quiet on the Western Front’ Review: The Spectacle of War 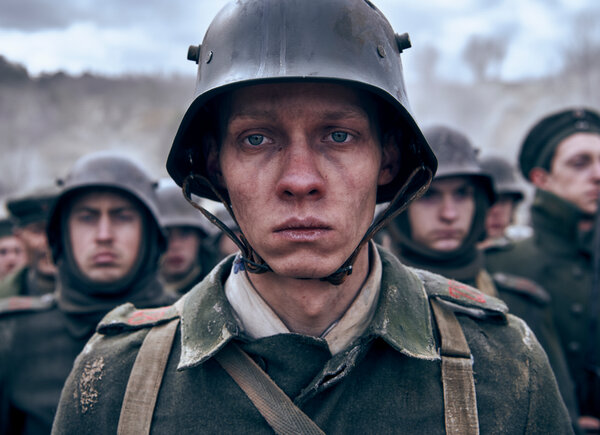 In his auteurist film history “The American Cinema” (1968), the critic Andrew Sarris compared similar scenes in two World War I films, King Vidor’s “The Big Parade” (1925) and Lewis Milestone’s “All Quiet on the Western Front” (1930), the first screen adaptation of Erich Maria Remarque’s 1929 novel. Vidor, Sarris felt, had a more satisfying approach to showing two soldiers from opposite sides in a shell hole, one dying. Vidor emphasized the faces of his characters, Sarris wrote, rather than pictorialism and spectacle.

The first sequence of Edward Berger’s new German-language adaptation of Remarque’s novel announces about as loudly as possible that it’s on the side of pictorialism and spectacle. It opens with a landscape: a quiet wood and mountains, seemingly at sunrise. A fox sucks from its mother’s teat. A Terrence Malick-like shot looks upward at impossibly high and peaceful treetops.

Berger then cuts to an aerial view of drifting smoke, which clears to reveal an array of corpses. A barrage of bullets suddenly pierces the near-still composition, and the camera turns to show the full extent of the carnage and the muck. This is war as a violation of nature. And that’s even before Berger trails a scared soldier named Heinrich (Jakob Schmidt), who charges ahead in a pair of unbroken shots — take that, “1917” — only to die offscreen. In a device that owes something to the red coat in “Schindler’s List,” Heinrich’s uniform will be stripped from his body, cleansed, stitched up, shipped to Northern Germany and eventually reused by Remarque’s protagonist, Paul Bäumer (Felix Kammerer), who notices someone else’s name on the label.

Does this version of a literary classic go hard or what? In truth, opting for pure bombast — a pounding, repeated three-note riff by Volker Bertelmann, who did the score, never fails to quicken the pulse — isn’t necessarily an ineffective way of translating Remarque’s plain-spoken prose. Berger has more tools at his disposal than Milestone did with the challenges of the early sound era, yet those advantages somehow make this update less impressive: The magnification in scale and dexterity lends itself to showing off. Still, the movie aims to pummel you with ceaseless brutality, and it’s hard not to be rattled by that.

This “Western Front” places its faith in big set pieces and powerful images. Even the scope has been widened. Berger cuts between Paul’s experiences in the trenches and cease-fire talks between Matthias Erzberger (Daniel Brühl), who chaired Germany’s armistice commission, and Marshal Ferdinand Foch of France (Thibault De Montalembert). The 72-hour deadline that Foch gives Erzberger to sign adds an element of ticking-clock suspense to the overall narrative, albeit by departing from Remarque’s first-person point of view.

The fates of the author’s soldiers are also tweaked. But there are moments here that resonate. When Paul trudges through the trench and collects dog tags from his fallen comrades, he finds a friend’s distinctive eyeglasses in the mud. Rats scurry to avoid the earthquake of approaching tanks. Paul, his face caked in dirt, tries to silence the dying gulps of the French soldier he has stabbed, in this movie’s counterpart to the Vidor-Milestone scene. Tjaden (Edin Hasanovic) jabs at his neck after realizing he’ll have to live as an amputee.

The closest thing the movie has to affecting character work comes in the relationship between Paul and Katczinsky (Albrecht Schuch), who enjoy one last mission to steal food from a farm during the final hours of the war — when neither the violence nor Berger plans to relent.