Barry Keoghan Doesn’t Mean to Be a Scene-Stealer

The Irish character actor has earned praise as a supporting player in movies like “The Banshees of Inisherin,” but he’s ready to be a star. 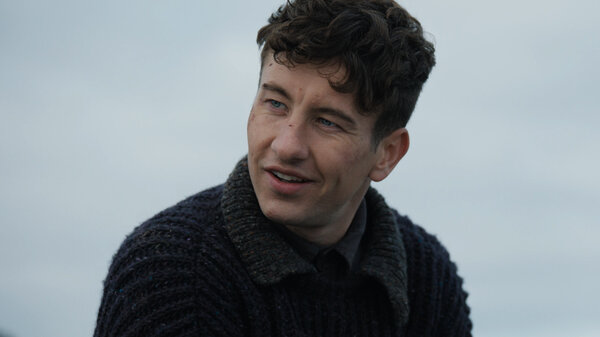 “The Banshees of Inisherin,” Martin McDonagh’s black comedy about longtime friends, Padraic (Colin Farrell) and Colm (Brendan Gleeson), who have a contentious falling out, has the shape of a classic two-hander. What’s strange is that its M.V.P. is neither of the leads but rather Barry Keoghan, as the slow-witted neighborhood boy Dominic, who steals every scene he’s in. Sprightly and erratic, with a hint of pathos behind an air of foolishness, he feels fully realized, and despite the limited screen time, Keoghan is vivid and moving.

He has a knack for this kind of thing. The young actor — he turned 30 in October — is frequently singled out as the highlight of stacked ensembles, as in “Dunkirk” (2017) or “The Green Knight” (2021). Like Willem Dafoe or Christopher Walken, Keoghan has an indelible presence that instantly attracts attention, whether vaguely sinister (his breakout turn playing a grudge-holding menace in Yorgos Lanthimos’s “The Killing of a Sacred Deer”) or amiable and sweet (“Banshees”). Next year, he will appear in “Saltburn,” the new film from the “Promising Young Woman” director Emerald Fennell. It will be his first starring role, and Keoghan hopes the move to top-billing sticks.

In the meantime, Keoghan is at home in Scotland, where he was speaking from his car outside his gym. He has been spending a lot of time boxing lately, as well as doing carpentry. His girlfriend’s brothers have their own construction business, and recently they’ve been bringing him along on jobs. “I’m going out and doing that three times a week, early in the morning,” he said. “I’m satisfied by the end of the day. I feel like I’ve really worked, practically and creatively.” At home, he’s been taking care of his newborn with his girlfriend, Alyson Sandro. “I’d be lost without her,” he said.

On a video call, Keoghan spoke about how animals inspire his performances, why he interacts with fans on social media and how he became unlikely friends with the Rock. These are edited excerpts from our conversation.

I take it you’ve been boxing?

Yeah, I’m back to boxing now. I’m actually competing soon enough — in December. I used to box for, like, 10 years, but took some time off. Now I’m trying to get back to it again and be fully focused. I’m training under a professional lad called Paul Keane, who is really good. I’m two or three weeks in now and finding my feet.

Would you say you’re a good boxer?

I’m good, man, I’m really good. I’m not one of these actor-boxers who hit the pads and look great. I’m there to compete. The thing with boxing is, it’s the only time I feel really present. You can do meditation — which I don’t — but people go on about feeling in the moment, and for me, that’s when I’m boxing. You’re totally immersed in this state that I can’t describe. I get that with acting as well.