‘Billions’ Review: Season 5 Spins Its Wheels Without Much Juice in ‘Beg, Bribe, Bully’

Everyone’s a little off their game in Season 5 of “Billions,” the no-holds-barred financial drama that once transcended its more ludicrous deliverables by sweetening the deal with big thrills and sharp fangs. Squandering much of the good will built up by its rip-roaring first four seasons, so far Season 5 is off to a disjointed and rocky start. With Axe (Damian Lewis) and Chuck (Paul Giamatti) back at odds after temporarily making peace, “Billions” seems stuck in neutral. The first three episodes have provided some of the bark but way less of the bite that made early “Billions” the down-and-dirty joy ride it once was. “Beg, Bribe, Bully” may seal the show’s fate as officially over the hill.

The episode opens with little ginger Gordie Axelrod (Jack Gore) making his daddy proud by designing and launching his own bitcoin farm out of his prep school dormitory, promptly shutting down power to the entire town. When Axe swoops in to save the day, he is greeted by an overly moralistic headmaster (J.C. MacKenzie) intent on teaching a guy like him that he cannot buy his — or his son’s — way out of his problems. “I will not allow you to put a price on Gordie’s soul,” the guy tells Axe, and the steam coming out of Axe’s ears is just as loud as the thematic exposition.

Though Taylor (Asia Kate Dillon) has so far been relegated to minor office politics, they are faced with a moral dilemma when one of their employees suggests a suspicious strategy in the midst of a fossil fuel divestment play. “It’s not the right play,” Taylor tells Sara (Samantha Mathis), who is chomping at the bit. “We’re at work. Not a fucking climate rally,” she replies. Earlier in the episode, Wendy (Maggie Siff) asks Taylor if they would sell their soul for ten dollars. When they hesitate, Wendy points out that their hesitation flies in the face of their purported agnosticism. 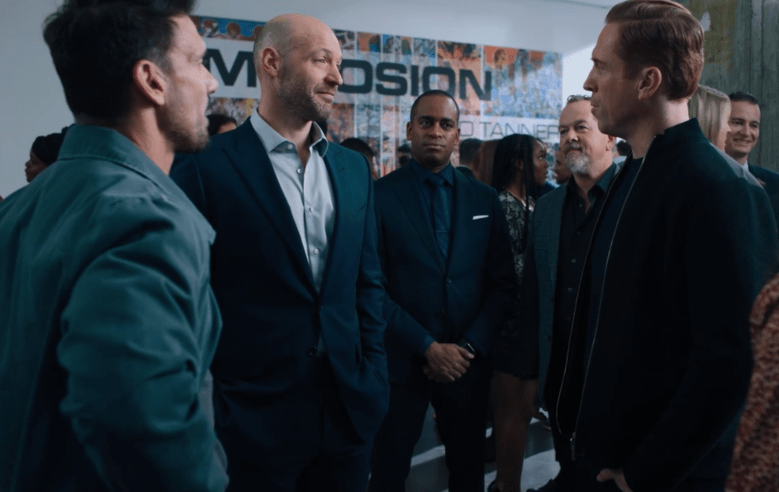 Souls, and their inherent worth, are a theme of the episode. A surprisingly lackluster B-plot involving Axe’s fixation on an up-and-coming artist offers yet another blatant example of the heavy-handed morality tale. Though we know from the fancy New York apartment Wendy used to live in that Axe owns plenty of old masters, he apparently has a taste for contemporary art as well. When he discovers his glad-handing rival Michael Prince (Corey Stoll) has bought the series he had his eye on, he becomes laser focused on making the artist his kept man. As Axe does when he decides he wants something, he eventually gets his way. His pitch is so cringeworthy it’s a miracle it works — “Do we like the Sistine Chapel any less because the Medicis paid Michelangelo to make it?” Is this the same show that used to quote Shakespeare as if he was Beyoncé?

“Billions” has never shied away from the larger questions in life, although whether it offers any valuable insights is up for creative interpretation. The tiny question of souls and their net worth runs alongside issues of fatherhood, an ongoing tenet of the series and now, apparently, the season. Chuck, hoping for a donation from his father to his beloved Yale Law School, must swallow his pride and introduce the kids to his infant sister. The dull resulting scene is quite telling of the show’s imminent decline. “She’s so small. How can she be my aunt?” asks little Eva (Alexa Swinton), an unnerving question that could have been funny but lands with a thud. The scene is a total throwaway: Instead of being deeply uncomfortable and funny, it’s just mildly awkward and forgettable.

It’s usually fun to watch Axe swing his toys around, but strong-arming government officials and digging up dirt on squeaky clean academics just doesn’t have the same appeal it once did. The interoffice politics of Axe Capital, once amusing and buffeted by unique characters, feel inconsequential and boring. Chuck’s scenes feel like afterthoughts, now that he’s solo, with Sacker sans ambitious lawyers jockeying for power. No doubt he will start making moves soon, but who has time to wait and see? Time is money, people. “Billions” should know that.