When last week’s episode closed out, T.J. told the players he was tired of the Algorithm. “It’s time to switch it up a bit,” he said. And that he did.

On Wednesday’s The Challenge: USA, a huge bomb was dropped: It’s now an individual game. No more Algorithm. No more teammates. It’s every man and woman for him- and herself.

As Ben talks to Danny about remaining “Survivor strong,” Danny hints at having other plans. If an easy target in his alliance is on the chopping block, he’s ready to step up, take him out and snag that cash. Sarah also expresses concerns that she doesn’t have enough money to qualify for the final, so she either has to win a daily or make some moves… even some dumb ones. More on that later!

DAILY CHALLENGE | In “Having a Blast,” players will ride on the back of a Zodiac and jump onto soaped-up runways being pulled by a tugboat. They must scramble down to collect four keys and bring them back to the key station without plunging into the water. The fastest to do it, wins. Oh, and two other players are going to be blasting them with water while they’re trying to get it done. Plus, it’s a men’s elimination week, so the ladies are safe… for now.

Ben goes first and absolutely crushes it, making him the player to beat. Cayla eats it almost immediately, giving Sarah the in to go for the win. Tyson and Danny also haul hard, but it’s uncertain whether it’ll be enough to best Ben.

When the results are read, T.J. tells the group that Enzo was the slowest; he’ll be heading straight into the Arena (with some stitches, to boot). The top two females were Sarah and Angela, but the one to win it was the latter. The top two males are Leo and Ben, with Ben taking the cake.

(Ben has been struggling a bit since it’s the anniversary of his friend Blake’s death. The two veterans fought together in the Iraq war. At one point, the entire cast clinks glasses in Blake’s honor.) 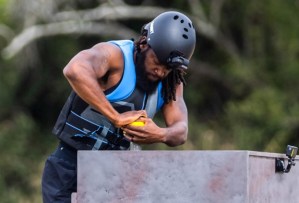 DELIBERATION | Angela pitches a plan, offering Ben protection as long as the Survivor guys don’t go after Angela or Alyssa. But that leaves Desi and Sarah on the outs, which isn’t great for the Survivor winner. Now that he has the money he needed, he’s into the idea, but has to get the others on board.

At the bar, Enzo’s looking defeated. He’s understandably concerned about his stitches. Sarah then decides that going into elimination herself, on a male week, would be a great idea, something that’s never been done before on The Challenge. (Facepalm.) Enzo doesn’t even have enough money for her to steal to qualify her for the final? So, what’s the point of this again? Ego? Oh, right.

ARENA | It’s a Hall Brawl, and Angela and Ben select Leo to go in against Enzo (which could be good for Enzo, size-wise. (It just dawned on me that this is going to be quite the cat fight. The Meow-Meow vs. the Afghanimal! Insert all of the cat puns here!)

For the uninitiated, players must race down a tight hall, smash each other to pieces and get to the other side before their opponent does. It’s a Challenge classic. The battle starts at the edge of the hall, which is puzzling. (Correct me if I’m wrong, readers, but usually the players stand much further back, so they can actually pick up speed before entering the hall. Much more smashy-smash goodness. What gives, CBS?)

Enzo wins Round 1, so I guess he isn’t going down without a fight. He continues to clobber, winning Round 2 and thus, the entire elimination. He now has enough money to quality for the final. Leo, on the other hand, doesn’t even show face for T.J. to give him the official send-off. (Show some respect!) Guess he can go fix his credit card machine?

Thoughts on tonight’s episode? We want to hear ’em. Sound off in the comments!