Chris Packham was joined by a host of Springwatch regulars on Tuesday evening, including Ellie Harrison in the Costwolds, Gillian Burke in Cornwall and Iolo Williams in mid-Wales. However, it was during an on-air disagreement with stepdaughter and new co-presenter Megan McCubbin which left BBC Two viewers rather taken aback.

Their minor spat came moments after Ellie provided viewers with an informative piece about grass snakes living in the wild.

During her segment, Ellie pointed out how the smell of the amphibian can be rather tough on the senses.

However, Chris had a slightly different view to Ellie when it comes to the stench of the snake, explaining that to end up covered in the scent was almost a rewarding feature. 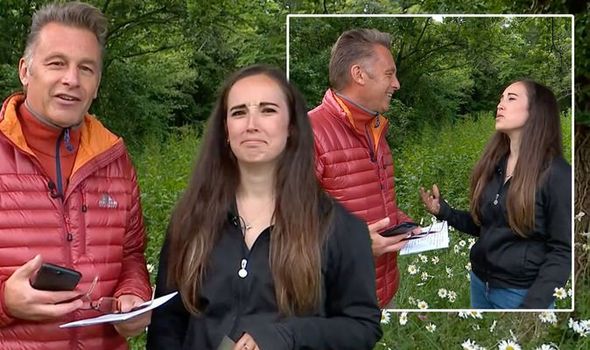 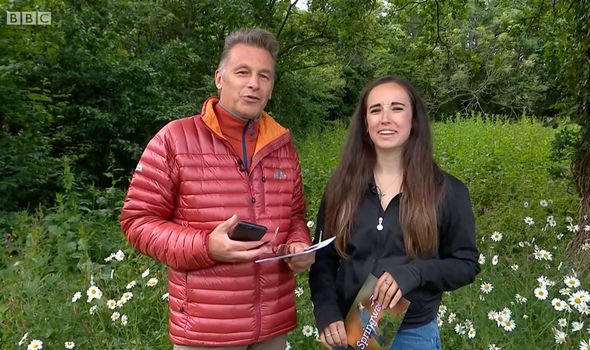 As the camera panned to Chris, he said: “Great stuff, well I’ve seen all of those reptiles, although I have to disagree with Ellie about the stench of the grass snake.

Megan, who had now joined her stepdad could be seen shaking her head in disagreement.

He continued triumphantly: “When I used to go around catching grass snakes as a kid, we came back smelling of that, you’d got one! You’d been successful.” 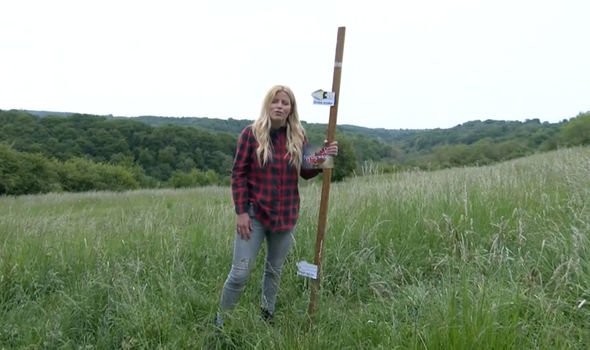 Megan found herself offering a different opinion, however, as she replied: “No! I mean you’ve got positive memories for that,

“But the smell! You can’t think that smell’s very nice.

“It’s really horrible (and) it lasts forever,” she added.

Not one to back down, Chris responded: “Hard to wash off but I used to lay beneath the blankets just sniffing my fingers thinking yeah, yeah, yeah, I’ve caught a snake.”

The pair soon moved one but for fans watching at home, they were taken aback by Chris’ stance on the topic – especially with his choice of words when it came to his argument.

Taking to Twitter, one fan said: “Chris Packham on #springwatch ‘I used to lay under my covers sniffing my fingers’ is something I will never unhear!! His stepdaughter’s face!”

A second added: “Did Packham really just say he used to lay underneath his blanket sniffing his fingers? #springwatch.”

Another replied: “Couldn’t believe it and Megan kept a straight face!”

While a fourth tweeted: “@ChrisGPackham saying ‘I used to sit under my blanket sniffing my fingers saying yeah, I caught a snake’ on #springwatch is the funniest thing I’ve heard in weeks!! #bbc #springwatch.”

And a fifth continued: “Ooh matron! @ChrisGPackham on #Springwatch #BBC2 recalling his love of the smell of grass snakes, under the blankets, sniffing his fingers, delighted that he’d caught a snake. He’ll remember that gaff!”