Cole Escola’s favorite movie character as a kid was Mrs. Potts. At five years old, their attachment to the jaunty housekeeper for the Beast’s lair in the 1991 animated classic “Beauty and the Beast” might explain their affinity for playing older women, whether as unhinged homemaker Chassie Tucker in “At Home with Amy Sedaris” or as Chip — née “the Twink” — in the latest season of the HBO Max millennial satire “Search Party.” Well, sort of, as Chip is actually just a psychotic 30-something heir cross-dressing as his wealthy aunt Lyla (Susan Sarandon), and keeping celebrity murderess Dory (Alia Shawkat) trapped in a padded basement. Think of the scenario as “Misery” meets “Room,” with a dash of “Psycho” for good measure.

“It’s funny because now I am getting older, [and] the women that I like to play aren’t really — so slowly the ‘older’ is going to be taken away so I’m just playing women,” Escola, 34, said over Zoom.

Escola, raised in a mobile home in Oregon but now residing in Brooklyn, is known for their Old Hollywood-invoking, garishly wigged female characters on Instagram, and they bring that matronly charm to playing Chip. Curly, red-haired, Susan Sarandon-esque wig and all. (HBO is rightly submitting them for Outstanding Supporting Actor in a Comedy Series at the Emmys.)

That ability to slip comfortably into an older woman’s skin stems not only from owning approximately 70 wigs of their own, but also from something many queer people can relate to, which is a childhood fondness for surrogate mother figures like grandmothers and teachers. “I was co-parented by my grandma, and I was very close with her. I would skip school every Monday to have lunch with my grandma and her friends. I’ve always identified more with the things they like. Even my apartment, there are lots of doilies and knickknacks,” they said.

“I always wanted a closer connection with these older women,” they said. “And of course, they were like, ‘That’s inappropriate!’ I always wanted to be friends with my older female teachers. I would stay in during recess and try to talk to them and they’d be like, ‘I need to go grade papers now Cole. Go outside!’ It was devastating at the time but now it makes sense.” 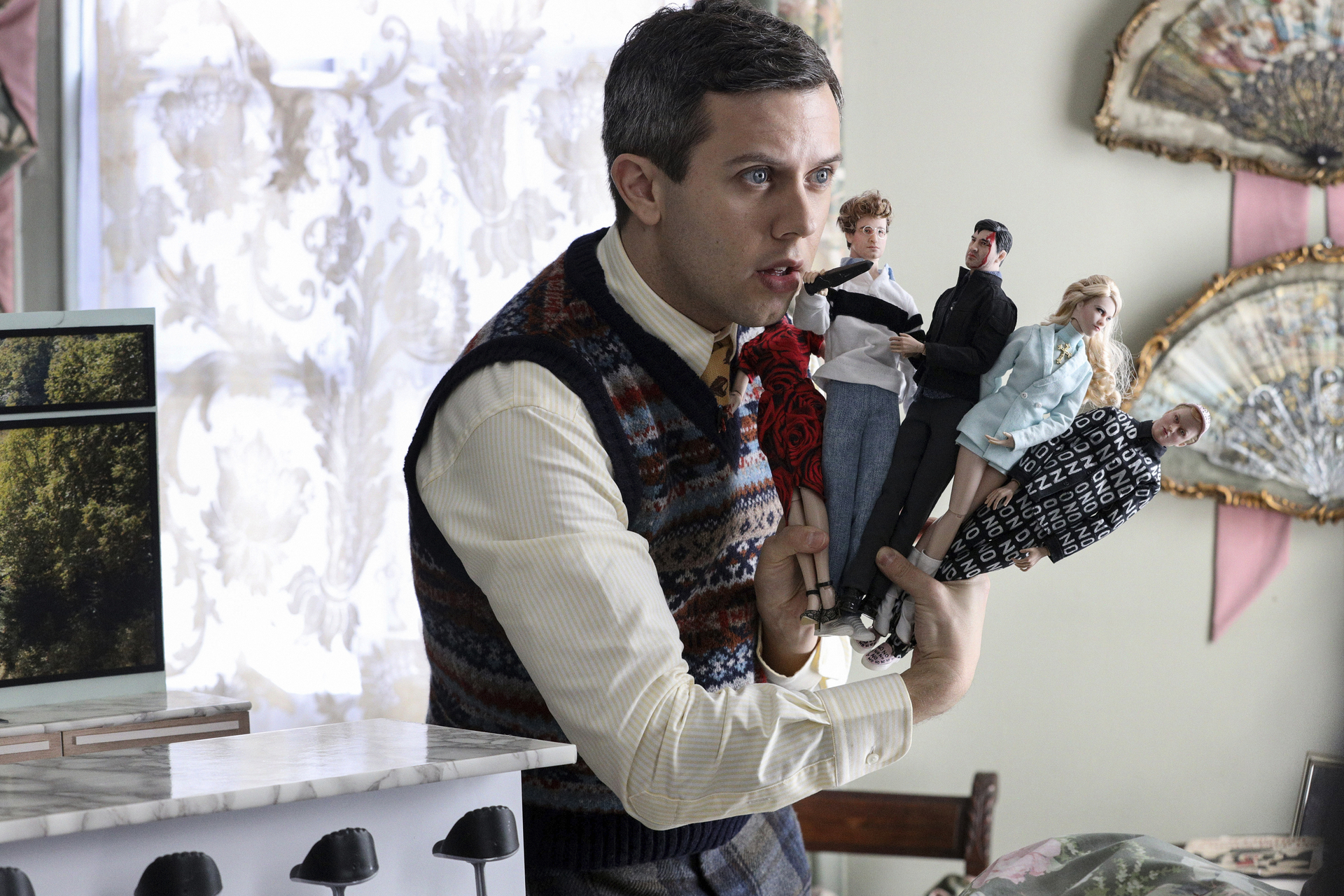 Naturally, creators and showrunners look to Escola for that particular style, which was the case for “Search Party.” Escola explained that creators Charles Rogers and Sarah-Violet Bliss turned to them and said, “We wrote this part for you. We don’t even see you the whole time; we just see your hands. Our hope is that next season it will be a Kathy Bates in ‘Misery’ type of situation.”

So it was clear all along that Escola’s unassuming cater waiter (who eventually torpedoes the wedding of Elliot, played by John Early) in Season 3 would become the Annie Wilkes of Season 4, kidnapping Dory and, through morsels of food and a lifelike recreation of her actual Brooklyn apartment, inducing enough Stockholm Syndrome to make her believe she’s in a safe space and perhaps, finally, adored. And having Sarandon play their aunt was the dessert to an already delicious role.

“Obviously Susan was our No. 1,” Escola said. Still, “that didn’t really affect my Chip character at all… they obviously wrote it for me and the older women characters that I like to play, and so they sort of had a voice for this character, but I also had to think about, ‘How do I think Susan might portray this character?’ I thought she would probably play it a little sultry, a little boozy, and I think I was right.”

Escola already had a well-informed vision of what Sarandon was going to be like on set after worshipping “James and the Giant Peach” (in which she voices Miss Spider) as a kid, as well as “The Rocky Horror Picture Show.” “That was a very formative movie for me,” they said. “That was the first time I ever saw queer sex. That was right before I got internet, so I had to come to it on my own.”

Each Escola performance and character is inflected with a worldly cinematic quality — often nailing that noirish, Transatlantic jibber-jabber accent — that suggests someone who has idolized and studied cinema closely. 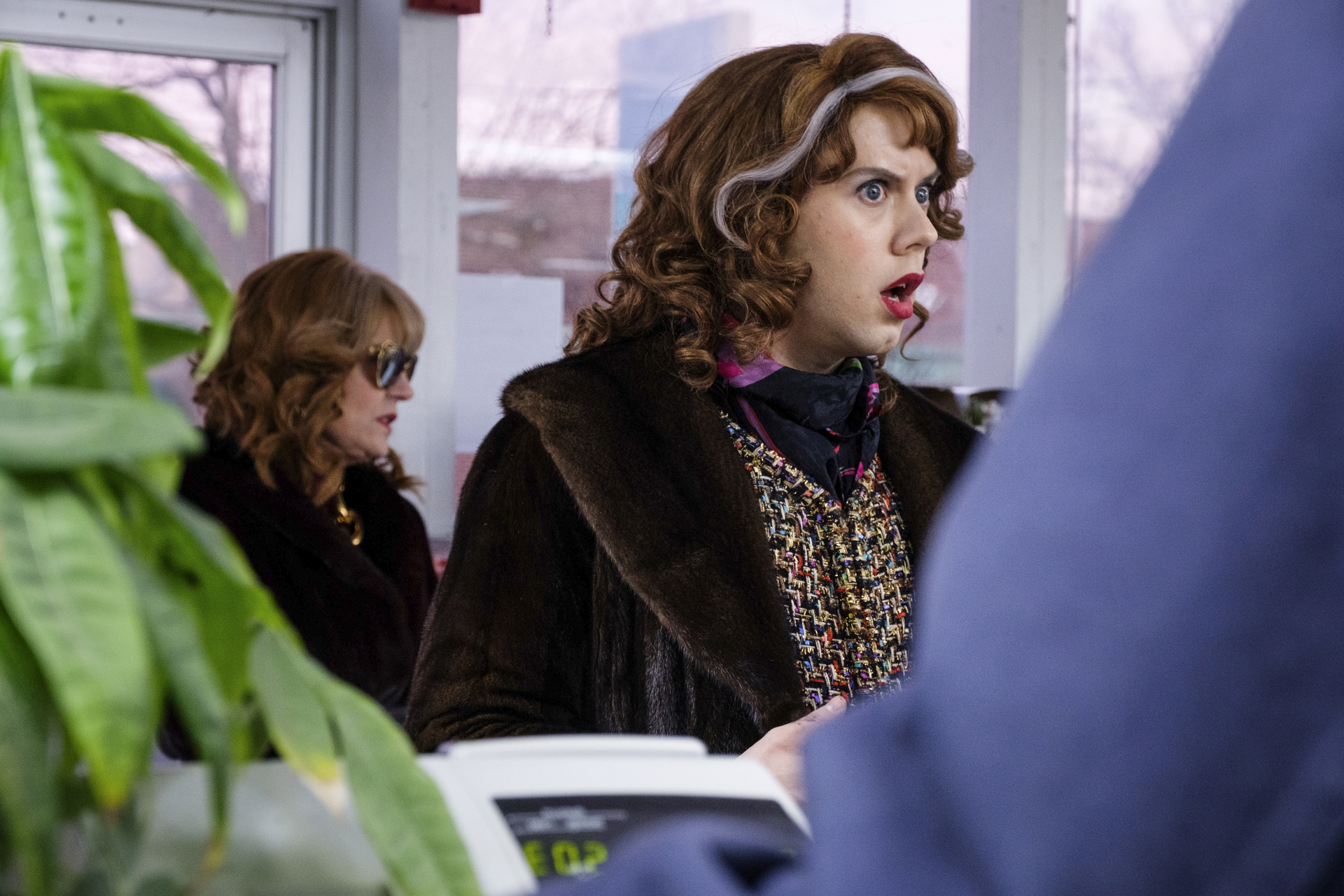 “Since I was little, my grandma would show me old movies. My mom always had Turner Classic Movies on, or AMC before it became what it is now! Just a vehicle for ‘Breaking Bad,’” Escola joked. “Those are my influences, really. Old movies. A lot of people ask who your comedic influences growing up were, but I don’t think that a lot of funny people are influenced by comedy. They are the conductors of comedy, and they take inspiration from things that aren’t really funny.”

That more or less chimes with the origin story of Chip, a spoiled, friendless brat turned obsessive fanboy who channels the trauma of an empty childhood into imprisoning Dory. That speaks closely to Escola’s own childhood, as well. “There was this sitcom with Christine Ebersole, [‘Ink’], it was like a newsroom-type sitcom. I would memorize her lines and try to incorporate them at school, in fifth or sixth grade. Humiliating, right? No one laughed. I remember one of them was like, ‘Did you get dressed in the dark this morning?’ I remember saying that to someone. Utter confusion. I went pale. I feel it now, the humiliation,” Escola said, recalling the relatable hot shame of being a precocious, culturally literate child that many now-grown gay humans surely feel.

As for what’s next for Escola, it’s hard to top Chip who — spoiler alert — could potentially show up in the already-greenlit fifth season of “Search Party” after surviving a house fire and running off with Aunt Lyla. But the pandemic has proved to be a productive time for them because they’re working on writing, guess what, a play in which they’ll star as Mary Todd Lincoln. Ideal casting for the master of playing iconic older women.