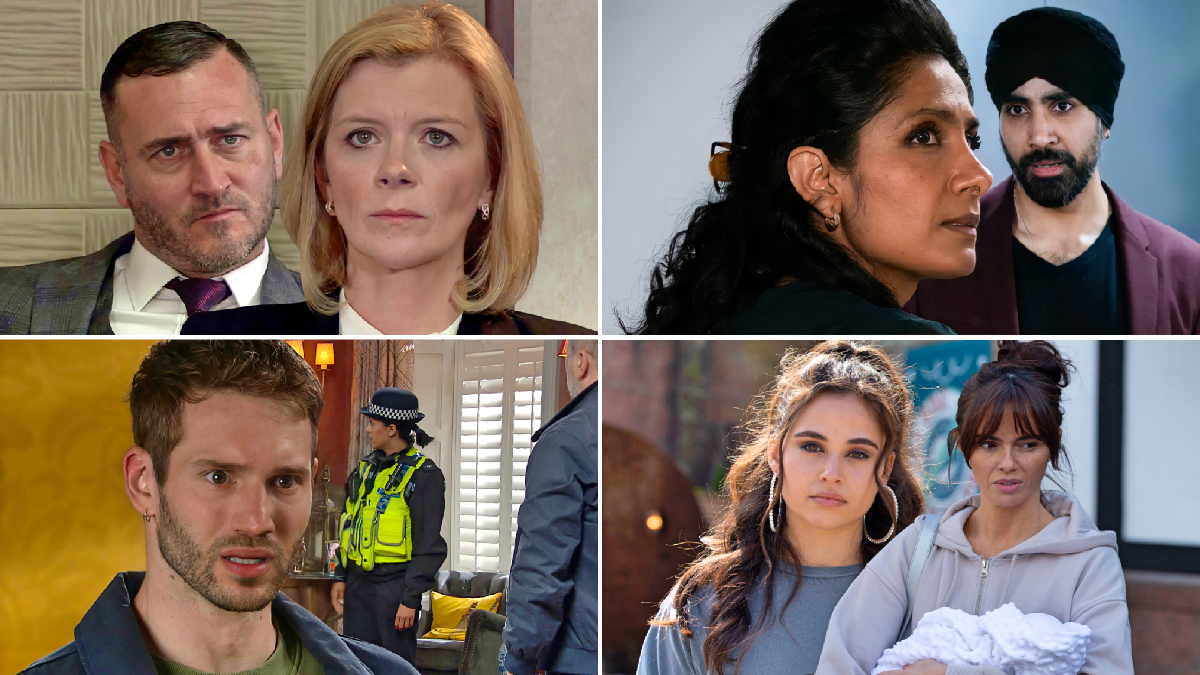 If you’ve binged through all of this week’s soap boxsets and are desperate to know what happens next, then you’re in for quite the treat.

Yes, there’s death, chaos and destruction aplenty in EastEnders, Coronation Street and Emmerdale next week, and due to scheduling disruptions caused by Euro 2020, all episodes of the aforementioned soaps will be available to stream from Monday (June 21) on BBC iPlayer and ITV Hub.

Leanne Battersby comes face-to-face with tormentor Harvey, while heartbreak strikes for the Panesar clan, as Kheerat finds Suki in floods of tears!

And the end of an era seemingly beckons in Emmerdale, as stalwart Kim Tate is found dead!

A moment while we process this.

Hollyoaks, which will air as normal on E4, sees Diane Hutchinson give birth, and sinister Cher McQueen kidnaps the child to frame Mercedes in a bid to destroy her.

It’s a week in soapland that will change a lot for many, and whether you’re bingeing, rationing out or simply catching them when they air on the telly, trust us: next week is not to be missed.

It’s the moment we’ve all been waiting for, as Harvey trial gets underway. Leanne enters the witness box, but as she stares the drugs baron in the eye, will she tell the truth, the whole truth and nothing but the truth? Or will she do as Harvey demands and refuse to give evidence? Sharon, in a shocking move, is called as a witness, and gives a damning report of how her nephew exploits vulnerable children for his own gain! Will Harvey at last pay for his crimes? And has Sharon really turned over a new leaf?

Todd and Billy worry for Summer’s wellbeing, and they later discover that she has collapsed following a dizzy spell. Summer is horrified when she realises that Billy and Todd think she’s got an eating disorder, but they’re all floored when she is diagnosed with type one diabetes. Summer struggles with the news, particularly when she learns that she’ll to manage her condition with injections.

When Fiz catches sight of Tyrone’s ‘T&A’ tattoo, she thinks he’s having a midlife crisis, and continues to mock him. Tyrone, meanwhile, receives a visit from a police officer, who informs him that Kirsty is dead! He turns to Fiz, and they discuss how they’re going to break this news to Ruby.

Kheerat hands Ben the money for Jags’ protection, and he comes to blows with Suki when it comes to light that he’s been paying Habiba’s rent! Awks. Kheerat, however, has enough and makes it quite clear that he’s going to start doing what he wants from now on, and therefore resolves to take Sharon out for the night.

Ben confronts Whitney about spending time with Callum. Whitney, however, advises him to talk to his husband, but he soon has other things on his mind when he sees Kheerat with Sharon and, feeling betrayed, he makes a phone call. Kheerat later breaks things off with Sharon, and opens up to Ben about the brief affair. Ben, however, is riddled with guilt. What has he done? And why is Suki crying when Kheerat goes to apologise?

The police question Chelsea over the possession of stolen goods, much to everyone’s shock, and Jack suggests she ask Gray to be her lawyer. She does just that, and they flirt with one another, even after Gray agrees to represent her…

Terry’s interest in properties on the Square raises Sonia’s suspicions. Kathy, meanwhile, goes on a date with the newcomer, and she’s surprised by the sheer amount of effort he’s put in. However, she later thinks her purse was stolen while out with Terry, and when Sonia learns Ruby’s house was broken into, she accuses her dad of both crimes!

Jamie thinks Will is the culprit who’s been poisoning Kim, after Noah finds diazepam in his toolbox. He snaps a photo of the diazepam, and later shows it to Kim, who feels betrayed. Kim sets in motion a plan to have Will caught on camera spiking her drink, and he heads up to Home Farm. Jamie, however, later takes an alarming phone call, and when he arrives at Home Farm, he finds Will being arrested. And Kim’s lifeless body lies on the floor!

Nate breaks the news that the farm may be closed down, and asks Tracy to return to work. Tracy agrees, but she’s worried about leaving Frankie. Lydia steps in to babysit, but when she falls ill, Faith comes to the rescue. Tracy, however, locks horns with Faith over a mishap with Frankie’s dummy, and she tells Nate their daughter is safe with her and only her. Attempting to wipe germs off Frankie’s face, Tracy accidentally scratches her, and she ultimately breaks down.

Victoria drops her bombshell about Luke and Robert to Aaron.

Cher tells Romeo she wants to remove her birthmark with bleach. Romeo, concerned, tells Sylver, who ultimately agrees to take Cher to a consultation to get the birthmark removed. Mercedes, meanwhile, discovers she’s not pregnant, and when Cher refrains from telling him such a thing until after the consultation, Sylver rails at her. Cher then takes action regarding her birthmark, which leaves her in agony.

Tony, sick of being cooped up after Diane implemented a makeshift lockdown, resolves to go for a walk. When he sneaks out, however, Diane goes into labour! Tony, upon realising what’s happened, forces his way in, and pleads with Diane to go to hospital. She ultimately does, and gives birth to a baby girl, who they name Eva.

Mercedes is struggling in the wake of her pregnancy discovery, and after hitting the booze, she labels Cher as nothing more than a self-serving cow. Cher retaliates by stealing Diane’s newborn baby, and placing her beside Mercedes while she sleeps. Peri, who arrives at The Dog to replace Cher’s bandages, finds Mercy holding the baby! How will Mercedes explain herself?