Home » TV and Movies » Creating the Exiled Sea Creature of ‘Avatar: The Way of Water’

Creating the Exiled Sea Creature of ‘Avatar: The Way of Water’

Payakan, the estranged young tulkun, exemplifies the director James Cameron’s obsessive attention to the biomechanics of every entity that inhabits the world of “Avatar.” 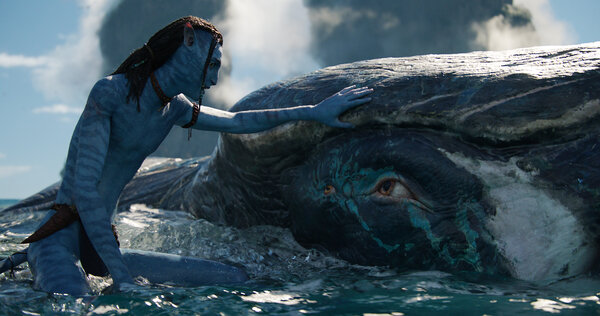 The first fact you must accept about the tulkun, the marine species introduced in “Avatar: The Way of Water,” is that they aren’t whales. The director James Cameron is adamant about this.

“I nearly got through the whole film without calling it a whale in front of Jim,” said Dan Barrett, who served as senior animation supervisor on the film as part of Weta FX, the famed visual effects company based in Wellington, New Zealand. “I did once, and you were immediately corrected.”

Enormous in size, and definitely whale-like in their general shape, these creatures have unique anatomical characteristics that set them apart from cetaceans here on planet Earth. Still, they call to mind the whales we’re familiar with in their extraordinary intelligence, their complex systems of communication, and their intricate social structure.

According to Rick Jaffa, one of the screenwriters of “The Way of Water,” the tulkun collectively embody one of the film’s main thematic undercurrents: the notion of interconnection with those around us, and with the natural world at large. Conceiving of their look and attributes was critical in this second installment of the “Avatar” franchise.

As Jaffa and his co-writers — Cameron included — began shaping the story and the characters, the art department (located right above their office at Lightstorm, Manhattan Beach Studios, in California) would incorporate those ideas into the designs of the creatures, readjusting as they went along.

“You felt like you were watching evolution in front of your own eyes,” Jaffa said.

The tulkun also have a profound and ancient relationship with the Metkayina, a Na’vi clan of oceanic people living on the fictional moon of Pandora. It is the Metkayina who welcome Jake Sully (Sam Worthington), the human-turned-Na’vi hero, as he and his family hide from their enemies.

One young tulkun in particular, Payakan, has lived in exile from the pack for years after a violent incident involving invasive humans. But when he befriends Lo’ak (Britain Dalton), the Sullys’ rebellious middle child, Payakan shares his story and gets a redemption arc.

The Return of ‘Avatar’

The director James Cameron takes us back to the world of Pandora for the sequel “Avatar: The Way of Water.”

Payakan’s status as an outsider, Jaffa believes, also resonates with how misunderstood Lo’ak feels within his family unit. This sentiment of not belonging in turn mimics the experience of the Sully family, who have been forced to find refuge away from their home in the forest.

Over the course of the action-packed narrative, as Payakan and Lo’ak learn more about each other, the friendship and trust between them develops into a spiritual bond. This genuine interspecies connection illustrates Cameron’s message of conservation.

A production designer on the sequel, Dylan Cole has been invested in the world of Pandora since the first “Avatar,” serving as concept art director on the 2009 film. For “The Way of Water,” Cole said, he and his team used Payakan as the prototype for the rest of the tulkun. But getting there involved plenty of experimentation.

“At first glance, yes, he’s very whale-like, but every single detail and component of him is different and alien,” Cole explained.

One of the primary design requirements involved the audio sensors on the tulkun’s crest, located on the head. Initially, the sensor mast resembled the kind of appendage found on the head of an anglerfish. But that version of the sensors was simplified and then removed as Cameron himself worked on several sketches to refine the crest shape and the way the head worked. Cole and his team took that final rendering, put the sensors back on the crest, and arrived at what we now see onscreen.

Since the tulkun have armor-plated bodies that are meant to articulate very flexibly, the art department and the animators collaborated to create plates that would move without crashing into each other when the creatures twist into various shapes. That outer shell couldn’t function like that of a sea turtle, for example; it had to be broken up into distinct sections that would allow for what Cameron was envisioning.

“One pose Jim drew was the tulkun arching its back with its pectoral fins all the way touching,” Cole said. “He was imagining these dance-type poses.”

Cameron had also written that the tulkun were mouthbrooders, which in this case meant that newborn offspring of the female tulkun reside in her mouth. The artists designed the mouth — which reveals a large pouch when opened — as if it were an enchanted cave, since that’s where Lo’ak interacts with Payakan’s “kuru,” the word for the tendrils that allow creatures on Pandora to mentally communicate with one another.

Cole and his team landed on an unfurling fern coil with many points of contact for the design of Payakan’s kuru. “We were trying to show that by having all those different kuru connections, their connections with others are that much more powerful,” Cole said.

For Payakan’s most prominent eye, his most anthropomorphic feature, the approach entailed creating a cross between an elephant eye and a human eye, with a familiar iris and pupil. Separately, the sclera, the eye’s outer layer, would most closely resemble those of horses and cows and include a nictitating membrane, the built-in goggles that make it possible to see underwater. The goal with all of these details was to elevate Payakan above a mere creature and give him a personality.

“Payakan was probably the hardest creature for us to crack because it’s not just a creature — it’s a character,” Cole said. “He really needed to be relatable and emote.”

The animators in turn focused their efforts on manipulating the movement of the eye, and the skin around it, to help with performance. “We needed to get as much out of that as possible because that’s what Lo’ak connects with: this enormous eye, cheek and brow,” said Barrett, the animation supervisor.

In terms of the mechanics of the tulkun’s locomotion, the animation team used humpback whales as a key reference. For Payakan’s more playful moments, however, the inspiration came from seals, particularly their expressive tails. In one instance that Barrett calls “the puppy shot,” the influence is clear as Payakan swims around Lo’ak.

To capture these interactions between Payakan and the Na’vi boy, the production built segments of the tulkun’s body with fiberglass and foam to give Dalton, who plays Lo’ak, an eye line and a physical reference while filming in the water tank. For underwater shots, there were devices that could move through the water, with a flipper for the actor to hold onto. The sophisticated tank could also generate a strong current to emulate Payakan’s speed.

The trickiest shots to achieve, according to Barrett, were those in which Payakan is at the intersection between the water and the surface, when only part of his body breaches. To make them happen, the animators had to account for the massive movement of water that would happen when a creature the size of a tulkun emerges from it, the sheets of water coming off him, and the mist as he clears his blow hole. This level of realism exists thanks to advances in C.G.I. technology that can help with replicating buoyancy.

“Without that we would have been dead in the water, so to speak,” Barrett said, “because you would have lost the sense of reality without that water, which was such a big character in the film in itself and such an important part of Payakan’s connection to his environment.”

Another moment, made possible through a combination of digital tools and motion-capture performance, synthesizes for Jaffa the poignant significance of the tulkun in the film.

“The first time we all saw the image of Lo’ak and Payakan with arms outstretched underwater, as if they’re trying to hold hands or connect physically, we all got really emotional,” Jaffa said.

For Cole, who is essentially an “Avatar” zoologist, the tulkun exemplify Cameron’s obsessive attention to the biomechanics of every entity that inhabits this world: grounded in substantial real-world references but imbued with enough meticulous, original details that we might almost be convinced that these creatures actually exist somewhere out there in the universe.

“I’m not only a fantasy film designer,” Cole said. “I’m a National Geographic explorer on Pandora trying to report back.”