“Remember those HBO Sunday nights when ‘The Sopranos’ and ‘Six Feet Under’ were on and you would just be so looking forward to getting in bed with your partner and watching together?” Feste said in a recent interview with IndieWire. “I remember thinking after I would watch those shows, ‘Wouldn’t it be so great if we could watch something that made us want to have sex with each other afterwards?’ What would that be? What would that even look like for me?”

Feste, best known for making films like “Country Strong” and “Boundaries,” said she started to think about traditional pornography and just how unsexy she found it — “it feels like a closeup lens on all the wrong parts that you just don’t want to see at the moment,” she said with a laugh — versus the films, like “Unfaithful,” that she thought were genuinely hot. The key: honesty.

The six-episode series follows Diana (Moore) as she juggles a variety of seemingly disparate desires and endeavors: her crumbling marriage to Oliver (Bang), a suffocating job at a boys’ club financial firm (plus the arrival of an intriguing new client, voiced by Ejogo), and her secret side gig recording women’s fantasies (all with their express permission, of course) that she sells on the internet to willing listeners. (You can listen to the first episode right here.)

In just the first episode, Feste lays out an expansive world for Diana to inhabit, while also showing off the many facets of her character. While Diana is steadily building up her own website where all those sexy fantasies are available to listeners, her personal life is suffering, and she and her husband Oliver haven’t been physically intimate in over a year. It’s not just an abstractly “relatable” situation for people in long-term relationships, but one very close to Feste’s own experience.

“There was definitely a time where I hadn’t had sex with my husband for almost a year, and I was terrified to admit that,” Feste said. “I was putting up this image of me having a really happy marriage, and I didn’t want to acknowledge how painful that was. … My husband and I have three children, and we’re in a very happy marriage, but there were times when we hadn’t had sex in that long that I thought, ‘We’re beyond repair, this marriage is over, I don’t know how we’re going to find our way back to each other.’”

(Spoiler alert: they did, and Feste’s husband, producer Brian Kavanaugh-Jones, also produced the podcast.) “I’ve never seen a story told from that beginning where a couple actually goes from a place of not having sex in over a year to finding their way back to each other,” Feste said. “That’s a really important story that I wanted to tell. It was really personal.”

That level of personal involvement, while essential to the emotional impact of the podcast, is also pretty scary. Feste makes no bones about how terrified she was to put it out there for just anyone to listen to.

“I think that’s terrifying, and it’s also terrifying to make that decision for my husband too, because obviously Brian’s in the industry and there’s definitely going to be a lot of people listening to it and thinking, ‘Oh, this is you guys, right?,” she said. “I’m a writer, I take liberties, I’m not Diana. But I remember right before we recorded it, Brian and I just looked at each other, kind of paralyzed, like, ‘Oh, my God, we’re about to tell the industry, the entire industry, that this is us as a couple.’ I was like, ‘Are you okay with this, Brian? All of those guys in the agencies that might give you a hard time, are you okay with this?’”

Feste got a little teary in her telling, adding, “And, this is why I married him, because he said, ‘This is a story that we want to tell, and I think we absolutely need to tell it.’” (If you’re thinking, “that’s beautiful,” you’re not alone.)

“I love writing things I’m afraid to write, and this is something that I was really afraid to write,” Feste said. “You put something out in the world and you think, ‘Oh, gosh, people will know me better when they read this.’ That was the most frightening thing about putting this out, I was like, ‘Oh, am I telling too much about me? What does this say about me? And what is the judgment that’s going to become of this?’ And then I realized that that’s exactly the reason that I need to write something like this and need to put it out there.”

Setting the story up as a podcast further allowed Feste to test some boundaries, both for herself and her audience. “I thought it would be a really great way to ease people into it,” Feste said. “Especially with someone like Demi Moore, who’s so iconic and everybody knows her, and they feel kind of safe in her hands.”

Feste said that utilizing an audio-only format was also just a good fit for the material, and she saw it as an opportunity to use the so-called “‘Rosemary’s Baby’ rule” (not showing, but letting the audience imagine it for themselves) to titillating effect. “We kind of lead the listener on a journey, but anything that they can picture and fill in the blanks is so much more sexier than probably something I could show on screen,” she said.

Feste said they started recording about a month into lockdown, utilizing Zoom (of course) to record the first season. It’s not how Feste pictured the process, and she said she worried about how to make a project about deep connections with a cast and crew that couldn’t even be in the same room together. She remembered thinking, “How am I going to make a show about connection when everybody is looking at a computer screen and we’re in different parts of the world? This is my entire job, to show that these people exist and love each other, or want to love each other. How am I going to get that with just a computer screen?”

And yet the relative distance actually injected more freedom of expression into the work. “I think [the cast] felt a little bit more freedom because they weren’t being looked at by 200 crew members, but they were in their own bedroom or in their closet or in their bathroom or wherever we were recording,” she said. “It let them take more risks in their performance. We’re recording actors having orgasms. The only time you hear the sound of someone having an orgasm is when you have sex with them or you’re watching pornography. In pornography, it sounds exactly the same. It’s like they’ve patented the orgasm sound, the female orgasm sound. … It was thrilling to be able to hear all these different actors expressing themselves in very different ways.”

And while “Dirty Diana” is indeed very sexy, it’s also filled with explorations of modern womanhood that go beyond their sex lives. Diana’s secret side gig recording the fantasies is just one part of her life, like her fraying marriage and her unsatisfying work life. “I feel like Diana is just as complicated as every single woman out there,” Feste said. “We all, just in order to get through our day, we have so many different personalities. We’re one way with our partners and one way at work. I admire women so much, because we are so malleable in making our day.” 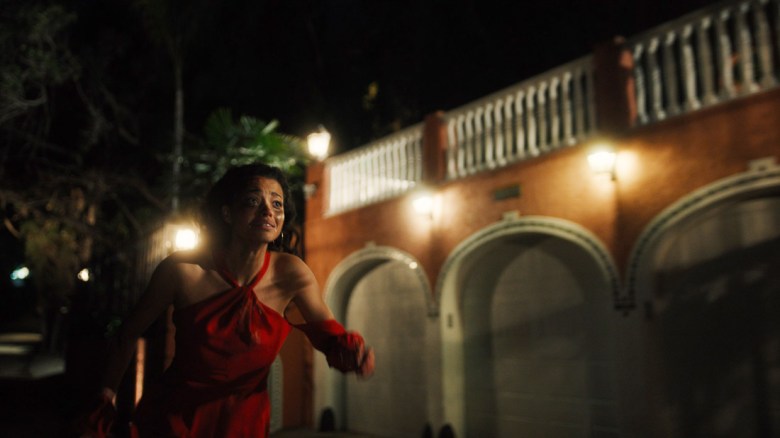 Feste, who has made five films in just a little over a decade, doesn’t yet know when she’ll get back to movie-making in the traditional sense. But her latest, the feminist thriller “Run Sweetheart Run,” is gearing up for a release in the coming weeks. The film, which premiered at Sundance in January and was preparing for a SXSW showing and May theatrical release before the pandemic arrived in the States, will now debut on Amazon later this fall.

For now, though, she’s already looking ahead at what a second season of “Dirty Diana” might hold. “Season two will definitely be about how Diana tries to get her marriage back on track, and that’s a long story to tell,” she said. “It’s a really hard journey to go on, but what I really want to do in season two is have Diana embrace dirty Diana, and her site Goodwood, and really own it and celebrate it and really making it grow as a business.”

She’s also going to have to handle an evolving relationship with her husband, one that still has a lot of legs on it.

“In the next stage of Diana and Oliver’s relationship, I think Oliver is going to be — and every girl can relate to this, but you know when you kind of break up with someone and then they’re incredibly happy? And they’re kind of improving themselves and doing all this work that you really always begged them to do, and they’re just really thriving and having a great time? — I think that’s going to be a little bit of season two, just seeing Oliver kind of fly for the first time,” Feste said. “Ironically, that’s the one thing that is going to turn Diana on more than anything.”

“Dirty Diana,” a QCODE podcast, is available on most major podcast platforms.