EastEnders spoilers: Karen Taylor ‘forced to give up Kayden’ in heartbreaking Keegan twist

Karen Taylor (played by Lorraine Stanley) was stunned when Sharon Mitchell (Letitia Dean) admitted she couldn’t cope and asked her to raise baby Kayden on EastEnders. The Taylor matriarch committed to leaving Walford behind to give Sharon the best chance of moving on after Dennis Rickman’s (Bleu Landau) death but Keegan Baker’s (Zack Morris) recent trouble with the police could mean Karen is forced to give up her grandson.

In the aftermath of his death, the grieving mother struggled to bond with her newborn son and came to a heartbreaking decision.

Fearing she wouldn’t be able to love him like Dennis, Sharon asked Karen if she would raise Kayden.

The Taylor matriarch thought the arrangement was temporary at first until Ian Beale (Adam Woodyatt) issued an ultimatum. 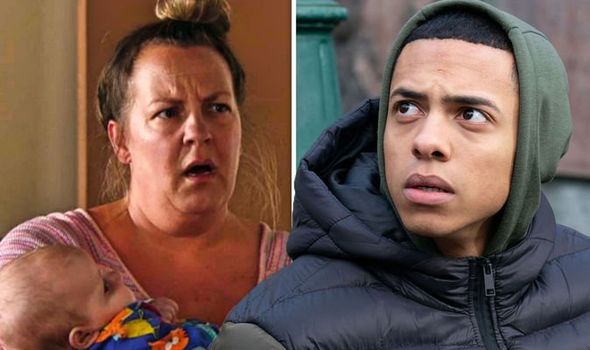 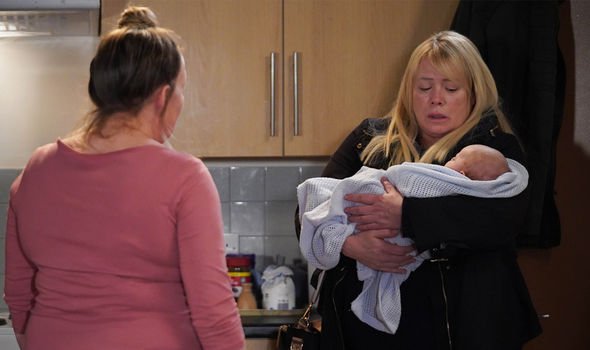 As he watched his friend suffer, Ian realised having Karen look after Kayden wasn’t enough to help Sharon move forward.

Ian offered to help Karen financially with raising Kayden but only if she agreed to move away from Walford.

The businessman warned her that if she stayed he would have no choice but to put her grandson in care.

Realising how much Kayden needed her, Karen agreed but not all of her family understood her decision. 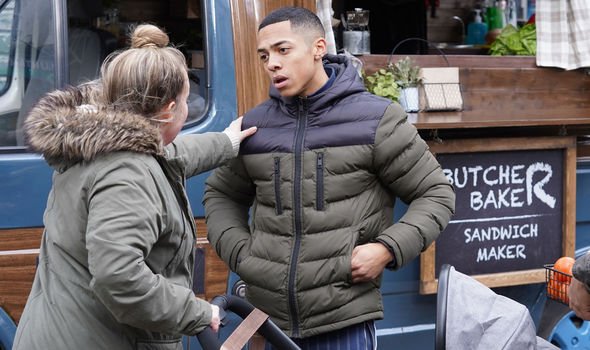 Keegan was hurt by his mum’s decision and has had a rough few weeks after being wrongly arrested for assaulting a police officer and throwing a brick at a police car.

When a party got out of hand on the Square, Keegan and Tiffany Butcher (Maisie Smith) tried to get out of the way.

Keegan was singled out when the brick was thrown before being pushed into a police officer by another party-goer.

The entrepreneur protested his innocence but was frustrated when a policeman’s body cam appeared to disprove his side of events.

Keegan is still struggling to come to terms with being wrongly accused and Karen fears her son could get into trouble when she leaves Walford.

Discussing her exit, Lorraine said: “Obviously as a mother, she doesn’t want to leave her children but she feels that she’s doing the right thing for Kayden, she couldn’t bear him to go into care so it’s her only option.

“I don’t think Karen can quite get her head around it because Karen is such a maternal mum, I just don’t think she’d even do that as a mother.

“In a way, she’s doing a similar thing but her kids are grown up so it’s different. So I think she’s got mixed feelings really. She understands what Sharon’s going through but I don’t think it would be something she’d ever do herself.”

When asked who Karen is most worried about, Lorraine revealed: “I think it’s probably Keegan because he is going through a rough time at the moment being arrested, plus he’s newly married and things are going a bit wrong for him so I think she’s thinking he’s vulnerable.

“He’s on a self-destructive vibe at the minute. I think she’s just worried that he’s going to get into trouble, he’s going to be the person that people are judging him to be.”

If Karen fears her exit will negatively impact Keegan, she may feel forced to choose between her grandson and son.

Will the Taylor matriarch stay in Walford and risk Ian taking Kayden into care or is this the end for the fan favourite?