Chas Dingle (played by Lucy Pargeter) was furious with Paddy Kirk (Dominic Brunt) when she discovered he had abandoned their baby girl while rushing Marlon Dingle (Mark Charnock) to hospital. Although the concerned mother has since forgiven her partner, Paddy hasn’t been able to forgive himself and Emmerdale viewers have watched the village vet struggle since the incident.

Last month, Paddy rushed Marlon to hospital when he exhibited signs of having a heart attack and left baby Eve in the car while he made sure his friend received treatment.

Paddy only left Eve unattended for a few moments but a passerby noticed and alerted the authorities.

Social services got in contact with the couple to arrange a home visit to make sure Eve was safe and Chas was understandably furious with her partner.

However, the concerned mother has since moved on from the incident and assured Paddy that she has forgiven him. 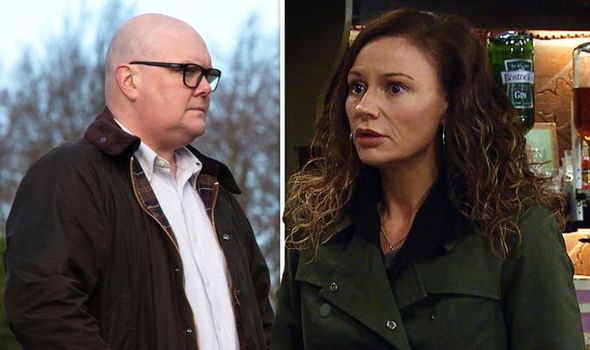 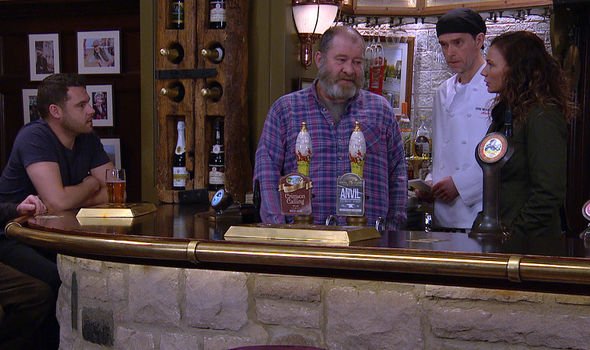 Emmerdale viewers will know Paddy has been extremely hard on himself and his loved ones have picked up on his erratic behaviour.

In recent scenes, the village vet was beside himself with worry when he realised he had one of Eve’s soft toys in his work bag.

Worried that his daughter wouldn’t be able to rest peacefully without it, Paddy raced around the village looking for Chas who was scheduled to be at a mother and baby class.

After finally catching up with Chas and Eve, the vet said: “Thank God for that, I was calling you. I went to the class but you weren’t there, in fact, no-one was there.” 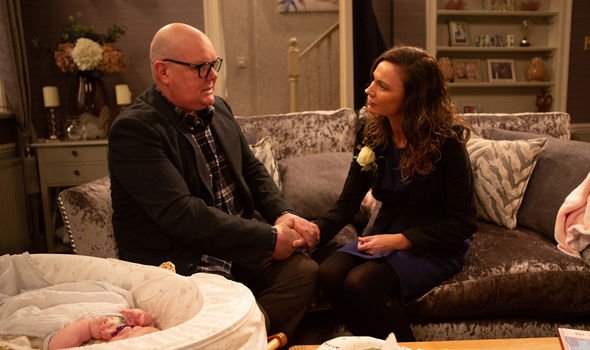 “What’s wrong? Are you okay?” Chas replied before Paddy explained: “I found this in my bag, I’m so sorry.”

“Have you been rushing around the village just for that?” Chas questioned.

“Yes, I didn’t want her being upset,” he replied before being told that Eve had been sound asleep the whole time.

Later, Chas tried to get Paddy to open up but he avoided her questions and shrugged off her concerns.

In an out-of-character move, Paddy lashed out at his dad during a seemingly harmless conversation about the new arrival to the family.

In upcoming scenes, the vet continues to avoid being honest with Chas about his feelings as he sparks worry amongst those closest to him.

Bear, Aaron Dingle (Danny Miller) and Eric Pollard (Chris Chittell) have all noticed Paddy isn’t coping and realise they have to step in before it’s too late.

The trio intervene and explain to Chas how badly the vet’s been coping but the concerned mother is distraught by the revelation.

Chas realised something wasn’t quite right with Paddy but she had no idea things were this bad.

Will Chas be able to get Paddy to open up or will he continue to suffer in silence?