Home » TV and Movies » Good on Paper Review: Iliza Shlesinger Charms in Netflixs Messy Rom-Com About the Hell of Dating

Good on Paper Review: Iliza Shlesinger Charms in Netflixs Messy Rom-Com About the Hell of Dating

Messiness is essentially the theme of Kimmy Gatewood’s “Good on Paper,” so it’s fitting the director and actress’ feature filmmaking debut is just that: messy. Not that it’s lacking charm, mostly care of star and screenwriter Iliza Shlesinger, who gamely co-opts her own notoriety and crazy stories to offer up an anti-rom-com with some sage insights about both modern romance and the stand-up comedy game. And yet, despite a clever idea at its heart — a serial dater meets a guy who seems too good to be true, a concept Shlesinger mined from her own bad dating experiences — “Good on Paper” can’t quite find its footing, offering insight and sparkle in only fits and starts.

Still, that doesn’t mean such insight and sparkle isn’t present, but they are often buried beneath scattered plotting that seems oddly uncomfortable with sticking to one idea for longer than a single scene or two. Ideas aren’t the problem here: Shlesinger and Gatewood are full of them, from the wacky-turned-weird romance that frames the film to a smart subplot about trying to make it in the comedy world as a woman (and what happens when women are pitted against each other inside that vicious milieu). But none of those ideas ever get enough air; instead, they’re constantly bumping up against each other, fighting for screen time and interest, resulting in an uneven outing that can’t satisfy even as it never offends. It’s cute, but could have been so much more.

Shlesinger stars as Andrea, a lightly veiled version of herself in the earlier part of her career — before the Netflix specials, hell, before this Netflix movie — a talented stand-up comedian who can’t quite break through. She’s dedicated herself to her career, and while that has earned her some degree of fame and plenty of gigs around LA, Andrea would really like to break into the scripted world. That’s hindered by all sorts of roadblocks, though she mostly fixates on the success of Serrena (Rebecca Rittenhouse, more than pulling her weight), who came to Tinsel Town at the same time as Andrea but has already managed to snag role after role. She’s even got billboards with her face on them!

After another busted audition, a bummed-out Andrea at least has the pleasure of a first-class flight to soothe her, and things seem to be looking up when the sweet Dennis (Ryan Hansen, playing intriguingly against type) plops down beside her. Andrea’s dating tastes tend toward the himbo variety, and goofy Dennis is very much not that kind of guy, but he’s kind and interesting and, perhaps best of all, he knows who Andrea is. For a gal struggling to feel relevant, it’s hard to discount the power of someone who seems to a) think you’re kind of famous and b) is into the stuff that allegedly makes you kind of famous. 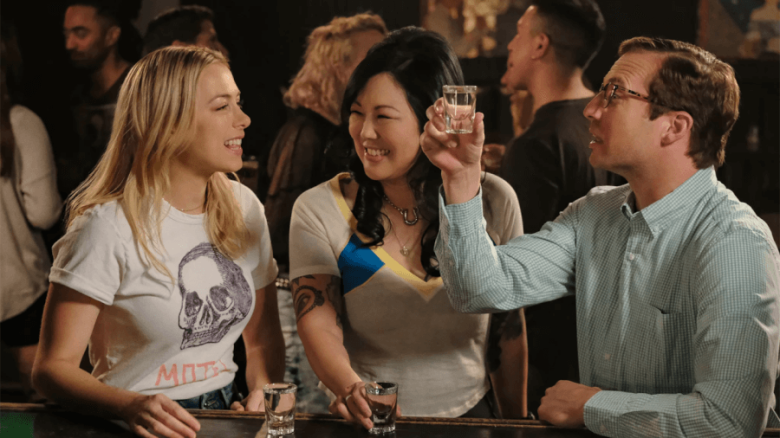 Andrea doesn’t expect to see Dennis again, but when he shows up at one of her gigs (she invited him! sort of!), the two tumble into a slow-speed friendship that’s genuinely nice, actually refreshing, and yes, sounds “good on paper,” just like Dennis himself. If Andrea can’t quite see the cracks in his facade just yet, it’s because she doesn’t want to, and also, Shlesinger’s own script simply moves too fast for that kind of considered pacing. One minute, Dennis is Andrea’s doofy sidekick, the next, they’re in love. Kind of. Soon enough, Andrea has discerned — with the help of some huge red flags, plus the smarts of her eye-rolling best pal Margot (Margaret Cho) — that Dennis is not who or what he says he is, quickly turning “Good on Paper” from a sweet rom-com into something very, very different.

And yet it’s unclear just what Gatewood and Shlesinger want from that particular twist. Narrative flourishes, including voiceover narration from Shlesinger and quick hits of her stand-up routine, pull focus away from the Dennis drama, turning the film into more of a vehicle for just Shlesinger’s talents, rather than this awkward chapter in her own romantic history. Real-world locations around Los Angeles, including the Comedy Store, add texture to Andrea’s professional woes, as does the Serrena subplot, which grows into something much more compelling than hinted at during the film’s first act. But other bits feel out of place, including a surprisingly gory sequence in which Andrea and Margot confront Dennis, along with a final act dedicated to legal issues that is out of step with the film’s otherwise wacky energy.

Shlesinger, however, stays charming throughout, and her attempts to ride all the vagaries of Andrea’s story and character hint at still-untapped performance reserves from the comedian. Andrea is a complex, funny, weird, and yes, messy character, and Shlesinger’s resistance to buffering over her prickly bits is the best thing about “Good on Paper.” But that same care isn’t applied to the rest of the film, which can never strike a balance with its many ideas and tones, turning its own prickliness into something that mostly just stings.

“Good on Paper” will debut on Netflix on Wednesday, June 23.