“Hollywood,” which follows in the footsteps of “Love,” “Easy,” and “Special” as the latest Netflix original series with an overly generic title, actually lives up to the dual nature of its un-Google-able name. Both a broadly appealing drama and an inclusive portrait of the movie biz, Ryan Murphy’s ’40s-era limited series follows a group of creative young dreamers who move to La La Land and try to upend the old studio guard running this town. The actors, writers, and directors’ archetypical rags-to-riches stories lay the groundwork for an enlivening crowdpleaser, even as the revisionist spin on Hollywood’s infuriating hesitancy toward inclusivity raises weighty issues of racial discrimination and sexual harassment.

Packaging topical commentary within a generic structure often leads to lasting insights. Be it the comic scenario supporting “Guess Who’s Coming to Dinner?” or the cops-and-criminals suspense driving “BlackKklansman,” providing an audience with an accessible framework is a great way to make your ultimate point heard far and wide. But Murphy’s seven-part series is so committed to campy pleasures it never bothers to surface any fresh ideas. “Hollywood” is just happy to paint a picture of what could have been, rather than work to say anything new about what Hollywood could become.

Fitting the conventional approach of trusting a straight, white, male to be the most widely appealing pathway into its story, the two-part series premiere enlists Jack Castello (David Corenswet) as our lead protagonist. A Missouri farmboy fresh out of the army, Jack strides into Hollywood with the confidence only a man this handsome and this dumb could muster. He has zero prospects and a pregnant wife in tow (Maude Apatow), so of course he’s just going to walk up to the , er, Ace Studios gate and get put in a motion picture. Well, when his starry smile isn’t enough to secure his first star turn, Jack has to do whatever it takes to survive in the big, expensive city, which eventually leads him to Ernie (a delightful Dylan McDermott), the owner of the Golden Tip gas station that makes most of its money as a high-end brothel.

All the stars and executives pull in for a pump from Ernie or one of his many handsome attendants, and that’s how Jack comes to know Avis Amberg (Patti LuPone), a former actress and current wife of Ace Studios’ head Ace Amberg (Rob Reiner). She helps Jack get his foot in the door, of course, but only after he recruits another part-time prostitute for the Golden Tip: a screenwriter by the name of Archie Coleman (Jeremy Pope), who’s willing to help with the men Jack refuses to service. Black, gay, and desperate to gain any traction in his writing career, Archie pens a script called “Peg” about Millicent “Peg” Entwistle, a real-life actress who committed suicide by jumping off the Hollywoodland sign in 1932. 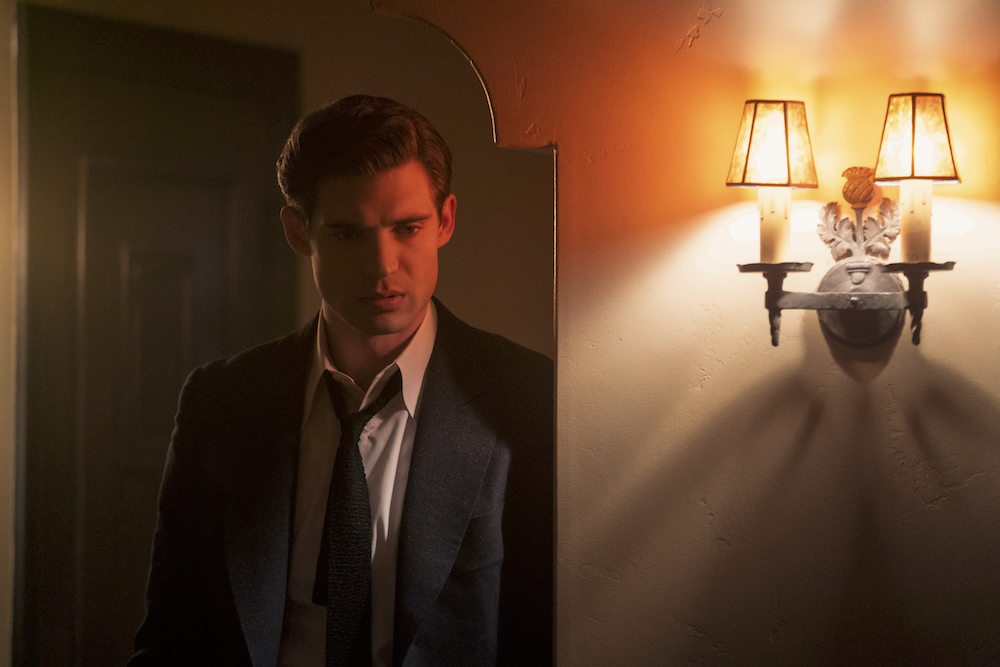 From there, Murphy randomly introduces Raymond Ainsley (Darren Criss), a good-hearted, progressive, and first-time director whose first movie is meant to right Hollywood’s past wrongs. So he meets with Anna May Wong (Michelle Krusiac), an actress and, in another factual element of the series, the first Chinese American movie star. Despite her popularity, Wong lost a part playing a Chinese character to a white actress, Luise Rainer, who went on to win the Academy Award for her work. In “Hollywood,” Ainsley wants to get her the Oscar she deserves and promises to find a part that will do just that. Enter “Peg,” its writer, his friends, and you’ve got yourself the central story of “Hollywood.”

Surfacing true stories about Hollywood’s shameful past could be one eye-opening service “Hollywood” provides, especially for Netflix audiences who, based on its streaming library, likely don’t know much about movies before Will Smith. But the way Murphy blends fact with fiction, not bothering to delineate the actual discrimination from the fabricated kind, means it’s just as likely all the slights blend into believable fabrications instead of damning facts. Yes, it’s easy to believe everything that happens in “Hollywood” has really happened to someone, some time, in some shape or form, but the consistent cheer in Murphy’s series betrays the real pain he occasionally references.

Still, like most Murphy projects, there’s great satisfaction to be taken in the gleaming production design, magnificent costumes, and enviable hair & makeup, while select performances live up to the stellar craft work surrounding them. Though many of the young stars struggle to separate the actors they’re playing from the acting they do as the actors they’re playing, Samara Weaving makes a meal out of a rather small role, and Corenswet makes you invest in Jack even though you know everything that’s going to happen to him. Criss is saddled with a rather simple part, especially after he went overboard in “The Assassination of Gianni Versace,” and Jim Parsons is only focused on making viewers forget “The Big Bang Theory” by shouting increasingly vulgar obscenities every chance he gets, but veterans like Joe Mantello and Holland Taylor capture the crackerjack patter and precise movements that bring their sympathetic studio execs to life. And McDermott, who seems to have an instinctual grasp on the variant tones of every Murphy project he’s called in for, completely steals the show — even stuck in an outdated archetype: the pimp with the heart of gold.

As “Hollywood” continues, Jack starts to take a backseat to his friends and colleagues who’ve experienced actual discrimination (rather than being called “dumb”), but the series doesn’t pivot from its generic character arcs. All we know about Raymond is he loves his girlfriend, an actress named Camille Washington (Laura Harrier), he wants to make good movies, and his mother was from the Philippines. His half-Asian heritage drives him to fight for inclusion after “passing” as white for years (which Criss himself has spoken about), but his passion for filmmaking itself is zilch — when an executive wants to change the ending, he sits in silence; when a producer pitches a dumb idea, he goes along. He’s way more interested in what his movie stands for than what it’s actually about, which comes to mirror “Hollywood” itself.

The limited series gets so caught up in depicting the Hollywood of Ryan Murphy’s dreams — to be fair, of any progressive, equality-minded, film fan’s dreams — that it forgets to dig any deeper than the surface. Problems discussed have been discussed before; issues raised have been prevalent for years, if not longer. By the end, “Hollywood” proves an entertaining diversion, but it carries less weight than the smog hovering over Los Angeles. All its good intentions add up to a show as interested in moving Hollywood forward as it is patting itself on the back for the progress that’s already been made — and anyone content with where the industry stands is probably a little too happy living in a fantasy of their own success.

“Hollywood” premieres Friday, May 1 on Netflix.