The group of eight friends behind the viral “NYU Girls Roasting Tech Guys” room on Clubhouse seemed oddly fated for fame on the $4 billion app.

On February 10, the group of New York University alumni got together on the audio-only app to host a “shoot your shot” themed room for their first time, where listeners get the chance to go on “stage” and pitch themselves as dates (or friends).

Then, an app malfunction suddenly sent hundreds of people into the room, they told Insider.

“It was like, 800 people got stuck in a room listening to us talk,” said Devin Lewtan, one of the hosts of the Clubhouse room that night.

At the time, the group didn’t have its catchy name yet (“NYU Girls Roasting Tech Guys” stemmed from a tweet by one of its audience members). But that night was the starting point for the group’s rise to Clubhouse stardom. The group of friends, who graduated NYU in 2020, consists of Lewtan, Callie Costello, Lauren Layton, Lydia Bonakdarpour, Mallika Reddy, Maryanna Arundel, Page Stein, and Sarah Jannetti.

A day after hundreds of users were stuck in their Clubhouse room, they tried it again. This time, about 4,700 users joined. Today, the group’s “club” on Clubhouse has over 12,000 followers and draws thousands of listeners, including appearances by Clubhouse cofounder Paul Davison, actor BJ Novak, musician Diplo, and TikTok star Griffin Johnson.

Twice a week, the group of friends (all 22 to 23 years old) hosts a live room on Clubhouse, which they describe as a “bar simulation.” Audience members get the opportunity to “shoot their shot” at or buy a drink for someone in the room. They are often rejected or roasted by the moderators.

But that’s part of the fun.

“Our show really normalizes rejection by how fast we move and how casually we brush it off when someone does get rejected on our show,” Costello said.

The group first got the idea of a “shoot your shot” room after seeing some popular TikTok stars host a similar room, Lewtan said. While they’re not the first room on Clubhouse of this theme — the rise of these rooms has been credited to Black creators on the app — the NYU Girls made waves across the internet.

The NYU Girls have worked with several brands on paid collaborations, including Slice (a pizza delivery company), Recess (a CBD beverage brand), Starface (a skincare brand), and Lolli (a cryptocurrency company). These sponsorships often include product giveaways.

And this week, the group was signed by WME, a top Hollywood talent agency that also represents digital talent like YouTube star Lilly Singh and TikToker Addison Rae Easterling.

While the eight NYU Girls work full-time jobs in marketing and tech, their late-night fun has turned into a money-making side project.

Insider spoke with six of the members about how they turned their viral room into a business. 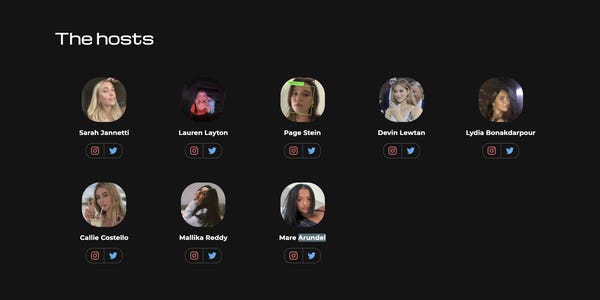 From brands to tips, there’s money to be made on Clubhouse

Clubhouse is only a year old, but that’s not stopping creators on the app from making money through brand deals, tips, and other methods. And Clubhouse itself has started beta testing direct monetization features, like tipping.

On Valentine’s Day, the NYU Girls hosted their first branded room in partnership with Slice. When a contestant was rejected by the group, they were let down easy with a free slice of pizza. Though this first partnership was not a paid, the group later partnered with Slice for a paid sponsorship, Lewtan said.

“We usually offer a cobranded room,” Layton said. That includes the sponsor in the room description and title, and the NYU Girls working on creative content that fits the brand seamlessly into the show.

For instance, when a room was sponsored by the skincare brand Starface, the NYU Girls planned a space-themed show that night. When they worked with Recess, they kept a chilled-out theme to align with the CBD branding.

The goal is to make it feel integrated and natural, Lewtan said.

“We also send out an email and a text message every night before the show that’s cobranded,” Layton said.

During the live room, the group also uses Spore, a new service that helps Clubhouse creators build a website and chat room for their community. Separate from the Clubhouse app, fans can pour into the Spore chat in a browser, while still listening to the Clubhouse room in the background.

In their chat, the NYU Girls have a banner ad that can include an affiliate link to a brand, which acts as another deliverable for a sponsorship.

But Spore offers more than just a chatroom. It also allows the NYU Girls to earn money directly from super fans. On an average night, about 100 listeners will join the Spore chat and many will send tips to the NYU Girls, they said. The platform even has a flashy incentive to gamify those donations: money rains down the screen.

The NYU Girls group is also part of Clubhouse’s tipping program, which is in beta. But the NYU Girls said they usually earn about eight times as much money through Spore as they do directly through Clubhouse.

“Because Spore is the place that our most loyal fans exist, the people who were the ones that have been coming back time and time again wanted to show that they were there to support us,” Lewtan said.

During their first night receiving tips, the group earned several hundred dollars between both Spore and Clubhouse, they said. 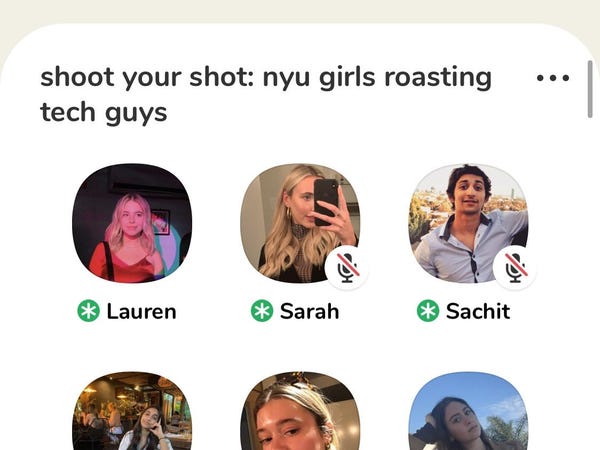 The NYU Girls look beyond Clubhouse

It’s only been two months since the NYU Girls hosted their first room on Clubhouse. They launched their club at a time when the app was at an all-time high of downloads.

Now, that seems to be slowing down. The analytics company Sensor Tower estimated that in February, Clubhouse peaked at 9.6 million new installs, which fell to 2.7 million installs in March. By April 18, it had only gotten 643,000 installs so far in the month.

But the NYU Girls are finding ways to build their business beyond Clubhouse — and beyond audio.

“We are primarily on Clubhouse right now, but we’re definitely exploring different channels just to strengthen our brand,” Arundel said.

The group has already begun to build its presence elsewhere on Instagram and TikTok. They’re also planning on creating more video content, which Layton called a “natural next step.”

“In the beginning, we got an amazing push from just having viral engagement on social media,” Lewtan said. “And so it was really exciting, but we were like, okay, well, what does this look like as a sustainable business?”

Most of the money they are earning is going back into the show and funding operation costs like getting someone to make and edit video content for them.

When asked about how they balance their full-time jobs on top of their Clubhouse show and growing business, Jannetti replied matter-of-factly: “We don’t.”