Akiva Goldsman gives his clarification after journalist and comic book writer Marc Bernadin reshares a screenshot of an article about unvaccinated employees.

AceShowbiz -One of “I Am Legend” writers cannot believe that the movie’s plot has become a part of anti-vaxxers’ conspiracy theory. Upon learning the issue, Akiva Goldsman was quick to shut down their arguments, insisting that the film is “not real.”

Akiva gave his clarification via Twitter on Monday, August 9. At that time, he responded to journalist and comic book writer Marc Bernadin who reshared a screenshot of The New York Times’ article about employees citing his film as reasons to skip COVID-19 vaccines.

“One employee said she was concerned because she thought a vaccine had caused the characters in the film ‘I Am Legend’ to turn into zombies,” so read the article. “People opposed to vaccines have circulated that claim about the movie’s plot widely on social media. But the plague that turned people into zombies in the movie was caused by a genetically reprogrammed virus, not by a vaccine.”

Reacting to the report, the screenwriter sighed, “Oh. My. God. It’s a movie. I made that up. It’s. Not. Real.” Many of his followers have since left comical comments underneath his tweet. One in particular opined, “The only way to end the pandemic is have the screenplay writer for ‘I am Legend’ go door to door explaining that his movie was not a documentary.” 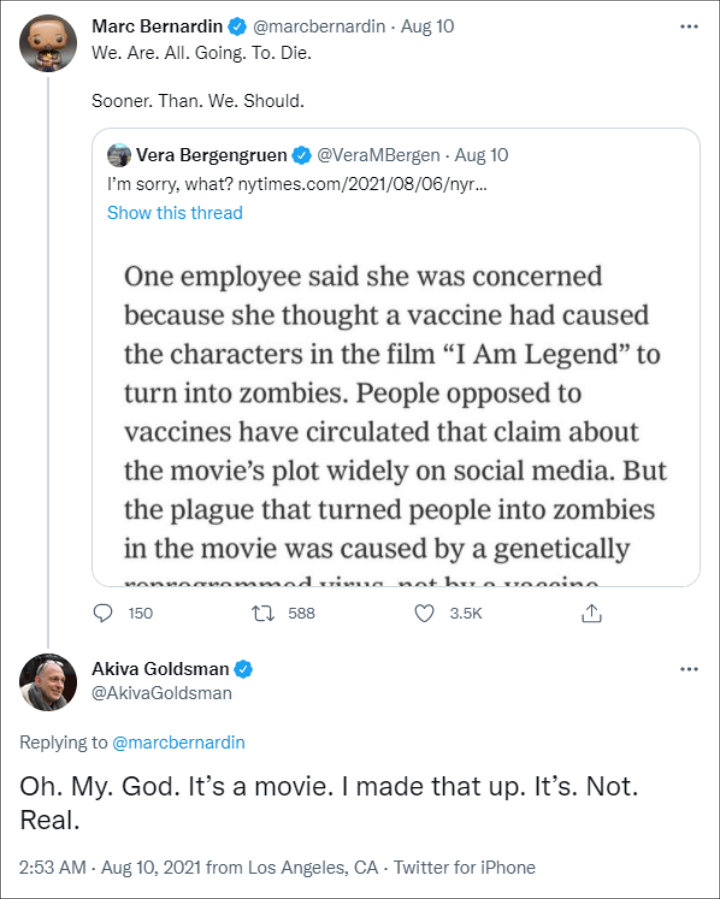 Akiva Goldsman reacted to anti-vaxxers citing the plot of ‘I Am Legend’ in their arguments.

Another sarcastically replied, “We. Are. Anti-Vaxxers! WE WILL NOT BE THWARTED BY PAINFULLY OBVIOUS, LOGICAL REASONING!” A third then chimed in, “I can’t believe you have to say that to functioning adults with a job.”

Akiva co-wrote the 2007 movie, which was based on Richard Matheson’s 1954 novel of the same name, along with Mark Protosevich. Starring Will Smith as U.S. Army virologist Robert Neville, the film narrates about him being the last person in New York City after a virus, which was established to cure cancer, ended up killing people and turning them into zombies.