Home » TV and Movies » In a German ‘All Quiet on the Western Front,’ History Has a Starring Role

In a German ‘All Quiet on the Western Front,’ History Has a Starring Role

More gruesome than previous film adaptations of the novel, a new Netflix feature looks to other conflicts past and present. 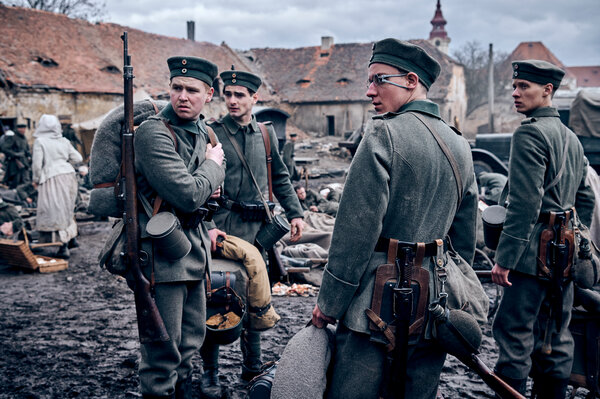 The writer watched the film in the Zoo Palast movie theater in Berlin, where in 1930 Nazis released white mice to boycott the Hollywood version of “All Quiet.”

“All Quiet on the Western Front,” Erich Maria Remarque’s seminal World War I novel, has had several onscreen adaptations.

The book, which has sold up to 40 million copies since it was released in 1929, tells the story of the German soldier Paul Bäumer and his comrades: high school boys who idealistically enlist only to be forced to adapt to the horrors of trench warfare by abandoning their own humanity.

“All Quiet” first arrived on the big screen in 1930, in a feature directed by Lewis Milestone that won two Oscars and still appears on lists of the best Hollywood movies. A 1979 CBS color version, starring Ernest Borgnine and Richard Thomas, strove for visual authenticity a few years after the end of the Vietnam War.

But Edward Berger, the director of a new, lavish version arriving on Netflix on Friday, said his film included a perspective that helped it capture the antiwar spirit of the original novel better than its predecessors: For the first time, a German-language team is behind the writing, directing and acting.

The impact of the country’s two brutal — and fortunately unsuccessful — world wars on the collective German consciousness informed how Berger approached the project.

“We all grew up with the subject inside of us,” he said. “We inherited it from our great-grandparents.” He added, “It colors everything you have, your opinion, your sense of aesthetics, your taste in music.”

Berger, whose previous work includes “Deutschland 83,” the popular Cold War-era spy series, said he couldn’t pass up the chance to adapt “All Quiet” for the screen in the shadow of recent geopolitical developments in Europe.

The actor Daniel Brühl, who produced and starred in the film, said, “It was really interesting to be able to show the essence, and the essential message, of Remarque’s book, which is an antiwar book, that there is nothing heroic in war.”

The resulting feature, which will be Germany’s submission for next year’s international film Oscar, also arrives as Russia wages a land war in Europe, the most significant armed conflict on the continent in nearly eight decades.

Production began in 2021, a year before Russia marched into Ukraine, but this “All Quiet” echoes some aspects of that ongoing conflict. Bäumer and his fellow soldiers are promised the war will be over in a matter of weeks, just as Russia apparently planned to hold victory celebrations in Kyiv just days after attacking Ukraine. And the film’s young soldiers, preoccupied with their own survival, are seemingly unaware they have invaded another country, just as Moscow has falsely claimed that territories within Ukraine now legally belong to Russia.