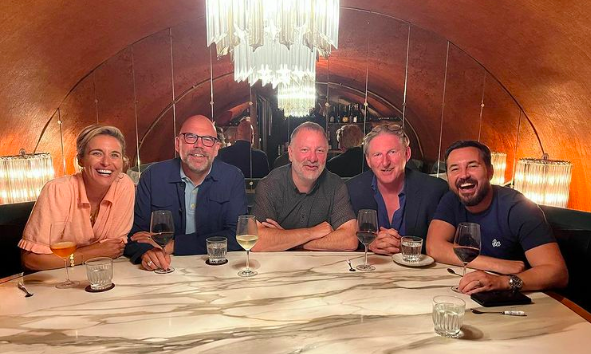 Line of Duty fans were loving it after Martin Compston shared a snap to celebrate 10 years since the crime drama landed on our screens.

While each of the six series, which featured starry guest actors including Keeley Hawes and Thandiwe Newton, focuses on a different undercover criminal conspiracy led by a compromised officer, the long-running arc revolves around unmasking supervillain H.

Suspected to be a high-ranking member of the police or justice team, the dogged efforts of AC-12 eventually reveal the identity of the uber criminal at the end of season six.

Since the series drew to a close, viewers have been clamoring for more of the detective drama, which was created by Jed Mercurio.

However, the future of the BBC blockbuster is uncertain with no concrete plans announced for season seven.

On Instagram, Martin, 38, set tongues wagging with a picture of him along with Adrian, Vicky, Jed and executive producer Simon Heath.

The five-some were all smiles as they appeared to be waiting to tuck into some delicious grub in an opulent private room in a restaurant.

Martin captioned the snap: ‘Celebrating ten years with this team.’

Fans’ excitement went into overdrive as they tried to guess the topic of conversation over dinner.

One said: ‘Talking about another series of LOD??’

‘We NEED season 7. A proper finale to this great series!’ a viewer wrote.

‘And chatting about a new season maybe??!!’ one of Martin’s followers said.

It’s not the first time Martin has shared a post of the band together, after publishing a similar reunion picture back in June.

Shortly after the photo was published, Vicky, who also starred in Triggerpoint, revealed on Good Morning Britain the cast were keen for another series.

‘We’d all go back. We adore working with each other. Jed’s writing is phenomenal, we’ve been working together for over 10 years now. The last series was incredible in terms of the response that we got,’ she said.

Line of Duty is available to stream on BBC iPlayer.