This thriller, about a teenage girl whose mother disappears, plays out on a computer screen. 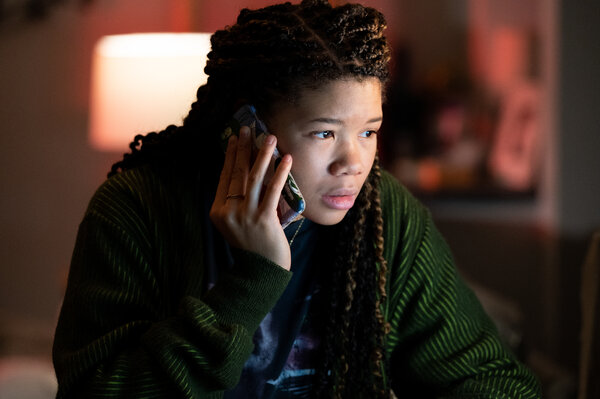 The gimmick behind “Missing,” a strenuous techno-thriller about a teen girl named June (Storm Reid) who takes to the internet to track down her mother (Nia Long), is that the directors and screenwriters, Will Merrick and Nick Johnson, frame the action on computer screens. All of June’s sleuthing is cloistered to apps which she opens in increasing panic. She’s a web-weaned child who barely bothered to speak to her mom even before the parent’s disappearance. Initially, June celebrates having the house to herself by Googling “How to throw a rager.” Her friends dutifully post her drunkenness to Instagram so that we, the viewer, can witness it.

June’s mother was last seen headed to Cartagena with her boyfriend (Ken Leung), a dork so drab that even his festive vacation shirts are drained of color. By the end of the first act, June and her best friend (Megan Suri) are scouring the man’s Facebook for clues to hack his email password. (Maybe they should try RedH3rring$.)

From there, the story emboldens itself from relatable online stalking to ludicrous plot twists, both of which Reid parries with confidence. When the film momentarily feigns to look like a film, the image zooms out to reveal that the handsome cinematography is really a true crime docuseries streaming on June’s laptop. (In a meta-joke, the show is a glossy re-enactment of the producers’ previous film, the 2018 mystery “Searching,” which shared a near-identical premise.)

“Missing” captures the constant distractions of the modern age. Pop-up windows continually tug at June’s attention. However, the film’s more engaging moments tap into the older cyber nostalgia of text-based adventure games from the 1970s, where problems are solved by typing the right command: Enter cave. Brandish sword. Write “Can I see the security camera?” into on online English-Spanish translator while on the phone with your mother’s hotel. It’s not exactly riveting to watch June download and install WhatsApp so that she can video call Colombia. Yet, there’s some pleasure in a brains-over-brawn quest that flatters us to fancy that we might be clever enough to solve it ourselves, despite giggles that arise when Julian Scherle’s score swells so portentously for June’s digital breakthroughs that you’d think Conan had smote an army. Even goofier is an emotional scene that builds to June pledging this teary promise to her vanished mother: “I’ll stop making fun of you for using Siri for everything.”

When June’s quest goes viral, the investigation — along with her role in her own narrative — nearly slips out of her grasp. Too much connectivity can be a cancer, Merrick and Johnson seem to say, and most of us already agree. Yet, there’s an oddly emotional sequence when June breaks into her mother’s dating app and, for the first time, learns to see her as a woman with her own desires. Better still is a bit part by the actor Joaquim de Almeida as Javier, a gig worker in Cartagena — “cleaning, electricity, you know” — who June hires to do cheap on-location reconnaissance. Javier has only a two-and-a-half star rating, but he’s so good that I spent the film hoping June would take a minute to write him a glowing review.