A group of high schoolers contend with a friend’s demonic possession in this 1980s-set horror-comedy. 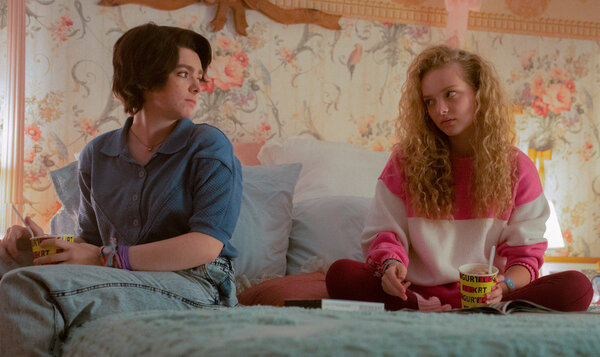 “My Best Friend’s Exorcism,” a horror-comedy directed by Damon Thomas, is set in 1988. As far as I could tell, there is no historical, cultural, or sociopolitical reason for its period setting, which has no significant bearing on the themes, characters or plot; it doesn’t even strengthen the film’s relationship to its most obvious influence, “The Exorcist,” which came out in 1973. In any case, the ‘80s, in this movie’s conception, are nothing more than a nebulous composite of vaguely evocative signifiers: big hairdos, fluorescent tracksuits, Trapper Keepers, and an old hit by Tiffany or Rockwell on the soundtrack every few minutes. I suppose as long as “Stranger Things” continues to be popular, we’re going to see a lot more like this.

Abby (Elsie Fisher) and Gretchen (Amiah Miller) are best friends. After an encounter at a spooky cabin in the woods, Gretchen is possessed by a demon, which restyles the ordinarily sanguine high schooler into a cruel, coquettish bully — think the satanic scares of “The Conjuring” crossed with the sardonic queen-bee squabbling of “Mean Girls.” Some of Gretchen’s villainous overtures are genuinely upsetting — a full-blown body-horror set piece involving an 11-foot tapeworm almost made me look away from the screen — but the film repeatedly undercuts whatever tension is mustered with its frustrating tendency to crack goofy, juvenile jokes. This clash of tones is especially flagrant during the climactic exorcism, which pits Miller’s serious performance against an over-the-top turn by Christopher Lowell as a Christian bodybuilder. At the same time, Fisher, so wonderful in “Eighth Grade,” is stuck trying her best in a film that wastes her efforts.