The world of “Penny Dreadful: City of Angels” blends realism with the fantastical world of the supernatural, and as its cast and creator will tell you, this mix allows a story often ignored by history books to flourish. The new spin-off, airing on Showtime, follows Santiago “Tiago” Vega (Daniel Zovatto), the first Chicano detective on the LAPD, as he investigates a murder with possible ties to the growing unrest in his community. The world of 1938 Los Angeles comes to life with an in-depth exploration of the Zoot Suit Riots and the creation of the Arroyo Seco freeway, mixed in with a good versus evil struggle involving supernatural beings.

Both series creator John Logan and actress Natalie Dormer make allusions to the show and our current political landscape. “If you think where we were the last five years,” says Dormer, “what both our countries [Britain and America] have gone through, the polarization of right versus left, the ideology and demonization of other people, it just rang true to me that he [Logan] that he was pointing the finger at the similarities between the 1930s and today.”

Dormer says she’s embarrassed that she didn’t know about the culture Logan was focusing on, as it is so pivotal to history. “The whole Pachuco culture, Chicano culture…I’m someone who loves history [and] I’m embarrassed to say I did not know the impressive grassroots counterculture [and] the youth culture.” The actress says she was fascinated by the cultures’ struggle and the “defiance of identity through clothes, through culture, through music, through dance” and her hope is that the show will foster a similar interest from audience to realize the impact of minorities.

For Kerry Bishe, who plays evangelist Sister Molly on the series, the lack of knowledge on the subject is just indicative of the skewed thinking most people suffer from when it comes to minorities and history. “I really believed this story that I was told throughout growing up that nothing interesting happened to women or people of color,” she said.

For Logan, the parallels between the past and the present were shocking. Out of politics and the marginalization of people that the series looks at, Logan also drew comparisons to “the pernicious influence of a foreign power…how these threatening influences can influence our electoral process.”

And in this looking to the past as a means of discussing the present, Logan says it’s imperative to chart the significance of Mexican Americans. As the Costa Rican Zovatto, who plays Tiago, explains, he was surprised that that the central fulcrum of the story revolves around a Latino family. “As Latinos, whether you’re Mexican, Costa Rican, Argentinian, I feel like we sometimes aren’t represented or we don’t have a voice,” he said. 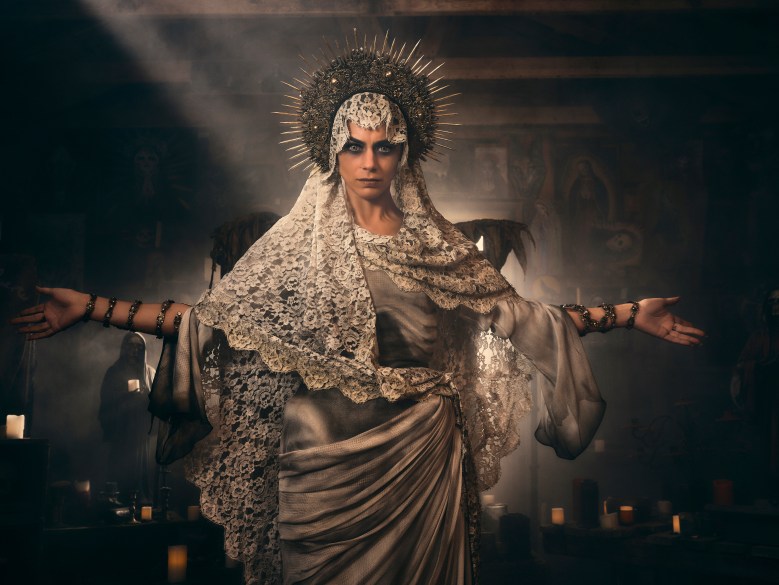 The actor felt “very proud” to “convey the feelings that people have gone through in their own lives” and he did so by approaching the character with sincerity. All the actors did research into their specific characters and Zovatto came to discover the racism that Chicano families faced in the early days of Los Angeles. “You start to see how the city was built and what that meant — meaning people [were] being kicked out of their neighborhoods, minorities especially,” he said.

Nearly all the actors interviewed admit they didn’t know much about the specific history Logan was working with, especially with regards to the Chicano community and the religion associated with Santa Muerte, manifested as a literal character here. With such an emphasis on the Latin American community, Logan says he understood the responsibility that carried — especially for him as a white American showrunner. Five of the series’ writers are Latino, as are two of the directors and Logan’s producing partner, Michael Aguilar.

“I worked really closely with our cast – who are primarily Latino – talking about ‘Does this express it well? Is this expressing it responsibly?’” But at the same time Logan says, “I don’t believe writers should limit their imagination to their own personal experiences. I don’t believe in the Balkanization of art. You have to be able to learn and to imagine characters who are not themselves.”

That being said, for Zovatto, a key resource that Logan brought to the production was Spanish film director Paco Cabezas, the first of two Latino directors on the series (the other is Roxann Dawson). “Paco is a very open, sensitive guy,” Zovatto says. “He’s very passionate. He loves Latinos. He loves filmmaking.” The actor says he needed someone “in my corner,” which Cabezas filled for him. “He talked in Spanish to me. He’d be yelling stuff in Spanish to me and people would be like ‘What’s he saying?’”

“For our cast, the fact that they’re telling their story, a story that was emotionally, academically, and critically important to them…everyone saw the opportunity to do something different,” says Logan. And in returning to Bishe’s point about the gaps in history, Logan’s words carry even more weight. “There were spectacular people throughout history who weren’t allowed to live interesting lives and they did anyway,” she says. “It really is just the stories we’ve chosen to tell are about the people who were in power and the way that they use it — and they were mostly white men.”

With a story that focuses so heavily on how power has influenced the present, the hope is that the future might learn something new to carry with them.