Home » TV and Movies » Q*Bert in Free Guy: What we know about Jacksepticeye's character in new Ryan Reynolds movie

Q*Bert in Free Guy: What we know about Jacksepticeye's character in new Ryan Reynolds movie

YouTube gamer Jackscepticeye has a cameo role in the new Ryan Reynolds movie, Free Guy, which is due out this  December.

Sean McLoughlin (aka Jacksepticeye) has a voice acting role for the character, Q*Bert. He will star alongside several other internet influencers who also have cameo roles.

Reynolds stars as Guy, an NPC — non-playable character — in the video game world. Guy is a bank teller and doesn’t realize his existence simply takes place in a video game until one day his life is turned upside down when he learns exactly who and what he is.

Guy then steps up into the breach, breaks his character, and takes on the role of a good guy. Or, as his character states in the trailer, “a great guy.”

Along with the main cast, a number of YouTube personalities show up in the film as well. They include Ninja, Pokimane, LazerBeam, and last but not least, JackSepticeye (real name Sean McLoughlin) or as he self-describes, “the Irish video game man.”

Who is the Q*Bert character in Free Guy?

While the other internet personalities appear in the film as themselves, JackSepticeye plays the character of Q*Bert. Unfortunately, not a whole lot of information has been released about the nature of his role.

JackSepticeye has talked about appearing in the movie but he has remained tight-lipped about what he actually did while on set. 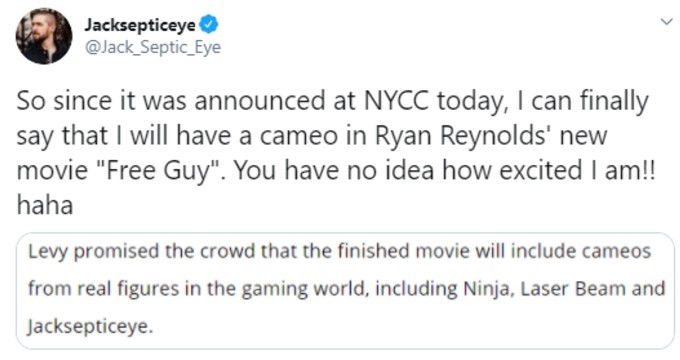 It is highly likely that the Q*Bert character refers to an old arcade game of the same name. First developed in 1982 by Gottlieb, Q*Bert was small, round, orange, and he had been gifted with a long, tube-like nose. In general, this entity looked like an orange ball with legs.

Q*Bert could generally be found on a multi-colored pyramid while trying to avoid various balls falling from the sky. The character could only move diagonally. When he was hit by a ball, he promptly fell off the pyramid.

By all accounts, the game was fiendishly difficult. It had been upgraded numerous times for various devices, the last time being in 2003.

The Q*Bert character mostly spoke gibberish and only had a few key English phrases, such as “Hello, I am turned on” and “bye-bye.”

We don’t yet know how much dialogue JackSepticeye has, but it’s unlikely to be a huge amount, though we may be proved wrong.

Yesterday JackScepticeye posted a video on YouTube in which he discussed his excitement about appearing in a movie with the prominent actor.

“I am actually in a Ryan Reynolds movie,” he then paused and said, “I’m holding for applause.”

He then said he couldn’t reveal any details because he was worried about getting sued.

Ryan Reynolds and JackScepticeye have collaborated on a project in the past. That project came out just before the release of Deadpool 2 in May 2018 in which the pair played Deadpool together.

Catch the trailer for Free Guy below.

Ryan Reynolds hit the headlines lately for his business acumen rather than his acting. He sold his Aviation Gin brand for a ridiculous amount of money. Reynolds and his wife Blake Lively also recently hit the headlines when they donated $200,000 to the Black Lives Matter movement.