An audience member at Question Time could be heard swearing over the prospect of Boris Johnson returning as Prime Minister, three months after his resignation.

On last night’s BBC One show, Fiona Bruce was joined in the studio by a panel including Graham Stuart MP, Jess Phillips MP and Mr Johnson’s sister, columnist and broadcaster Rachel Johnson.

At one point during the programme, one person in the audience expressed his view on who he thinks should succeed Liz Truss after she officially stepped down as PM yesterday following a tenure of just 44 days in office.

The man said: ‘Graham spoke at the beginning about wanting someone who can command a majority in the Commons, and Jess said something about them needing a mandate, a proper mandate. There’s only one man who’s got both of those boxes ticked, and that’s Boris Johnson.’

In response to this statement, another man sitting in front of the speaker could heard uttering ‘b*****ks’ and rolling his eyes in disdain.

The speaker continued by stating: ‘I think it’s time for him to come back,’ as light chuckling could be heard in the background. 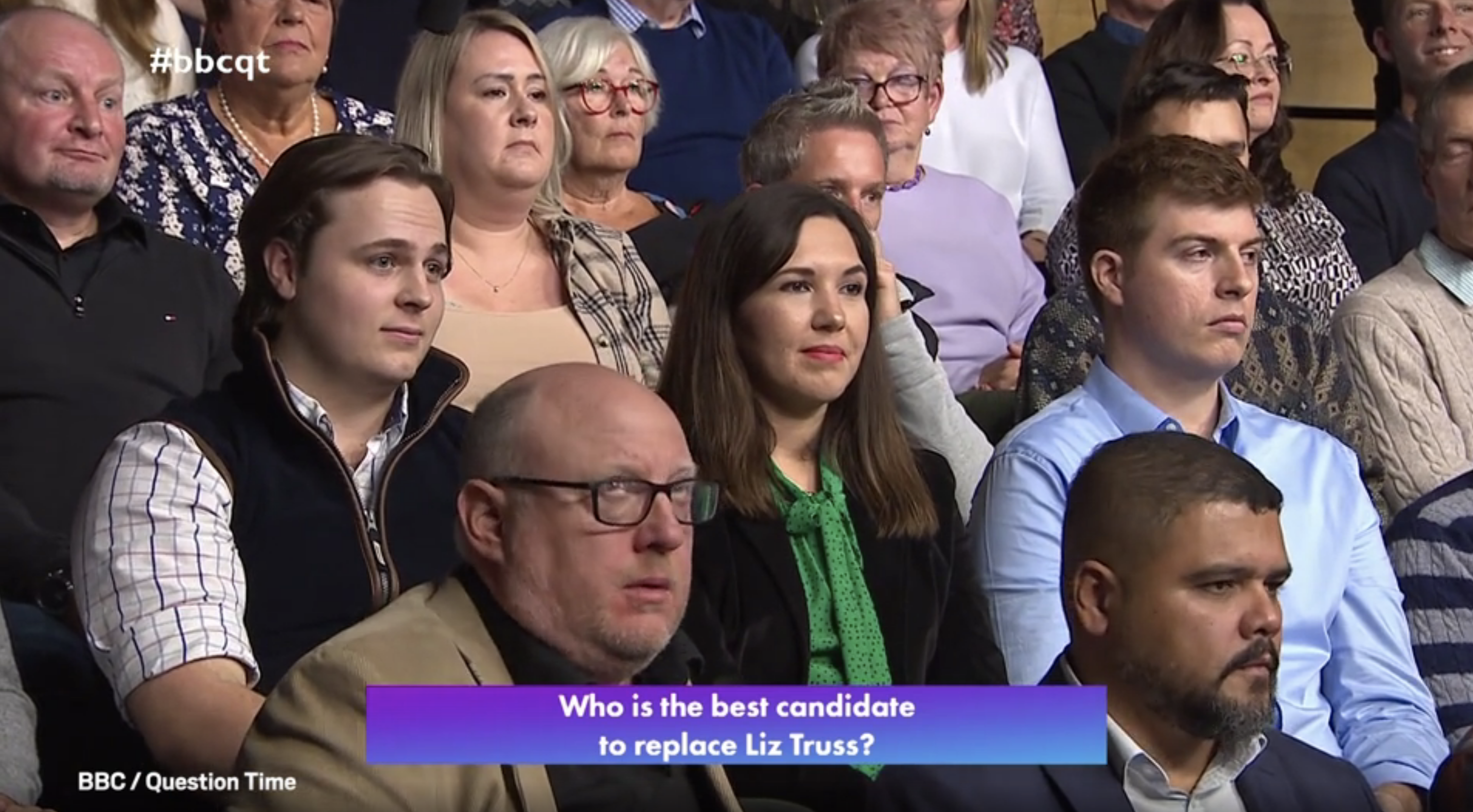 The moment captured on camera was shared widely on Twitter, with one amused viewer writing: ‘Love the bloke in front of the Boris Groupee audibly saying b*****ks and rolling his eyes.’

‘Deep belly laugh, that was hilarious,’ another person commented, while someone else remarked: ‘I’ll buy “b*****ks man” a drink.’

One person said that in their opinion, ‘the bloke at the front speaks for most of us’, while also observing that there was a ‘deafening silence from the audience’ over the suggestion of Mr Johnson becoming PM again.

‘We need to find that gentleman seated in front of this young, Tory fool and get him on to the New Year’s Honours List,’ another individual quipped.

Following Ms Truss’ resignation as PM, it’s been reported that Mr Johnson and Rishi Sunak could be going head to head in the Tory leadership race.

Despite Mr Johnson leaving No 10 Downing Street just last month, a recent snap poll of Tory Party members saw him emerge as their top choice as a successor.

In her resignation speech, Ms Truss said that she ‘​​came into office at a time of great economic and international instability’.

She said that she had spoken to King Charles III to announce her decision to resign, adding that she would remain as PM until a successor had been found.

Question Time returns on Thursday at 10.40pm on BBC One and BBC iPlayer.