If I've learned anything watching Outlander, it's that I never really know where the show's going next—and I plowed through the eight-book series it's based on before the show aired. Catching up with Sam Heughan, who plays Jamie Fraser, confirms studying up on The Fiery Cross hasn't prepared fans for the dramatic twists throughout Outlander's fifth season. For the record, Heughan doesn't mind toying with our emotions.

Take the aftermath of episode seven's cliffhanger. In "The Ballad of Roger Mac," Jamie's son-in-law Roger Mackenzie is mistaken for a member of the Regulator militia and hanged. We learn Roger lives in the next episode, but fans who knew that would happen were still devastated. "I loved recently seeing people get so angry that they thought we’d actually killed Roger off," Heughan says with a laugh. "They were like, 'You’ve actually killed him? He’s alive in the books! What’ve you done?!' It’s great that we can still tease and play with their expectations."

That was two episodes ago, and Outlander's already throwing new curveballs at the Fraser clan. Jamie's been through it in season 5: Protecting his family in the North Carolina colonies has meant temporarily fighting alongside the British Army—a moral betrayal given Jamie's Scottish Highlander roots—and watching his uncle, Murtagh, die at the Battle of Alamance. Just when viewers thought Jamie was safe, he nearly dies from a venomous snake bite in episode 9.

Nearly everything is dangerous in 1771, when Outlander's current season takes place. But the new threat to Jamie's life "really comes out of nowhere," Heughan says. "Jamie’s always put his body on the line and is very aware of his strength and his fortitude. So when he’s first bitten by the snake, he really isn’t too concerned, but then it escalates very quickly and Jamie is faced with his own mortality."

Watching Jamie's wound fester and rot is bad; watching Claire's futile attempt to heal him back at Fraser's Ridge is downright painful. At the episode's climax, Jamie nearly succumbs to illness caused by his wound. Through the haze of a fever, he asks Claire to touch him. That touch somehow gives him the strength to stay alive. "I knew you were the one thing that could bring me back," he tells her.

I'll admit it's a spiritual swerve from Claire's usual methods as Outlander's resident healer. So I asked Sam Heughan to explain what's really happening here. "What we wanted to do was show that through her touch—I think that she has this ability, I wouldn’t say it’s magical, but maybe it is," he says. "She has this healing ability in her hands and in her body. I think it’s her love and her presence that certainly brings him back from the edge."

It's the second time the strength of Jamie and Claire's love has saved Jamie's life. "I always felt that the same had happened to him before, on the battlefield at Culloden [in season 3]," Heughan explains. "He sort of took his last breath, and he got a glimpse at the afterlife, but in the end I think he saw Claire." 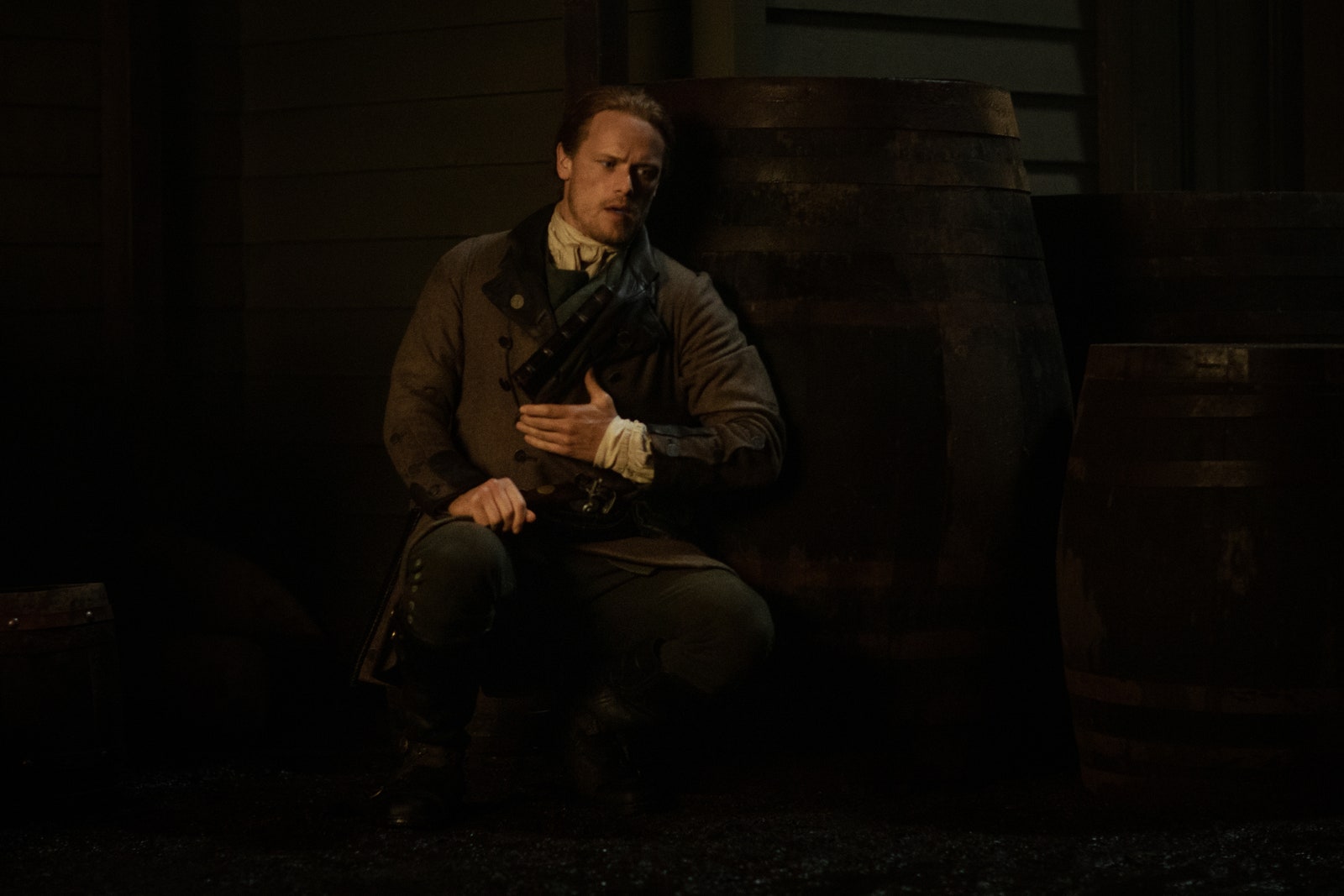 Jamie and Claire's bond is so powerful in these scenes, Heughan argues the couple's lifesaving moment goes where their steamiest sex scenes haven't. "For me, that’s probably the most intimate moment we’ve had for quite a long time," he says. "But it’s not them having sex, it’s something deeper than that. It’s hard to find a new way of showing that and expressing that, and that’s certainly what Caitriona [Balfe, who plays Claire] and I pushed for in those scenes."

Intimate, yes. A substitute for season one's wedding scene? Not necessarily. But glimpses like this will become more common now that Jamie and Claire's family (and extended family, and tenants at Fraser's Ridge) are cutting into their alone time. "I think you see a new sensitivity and intimacy between Jamie and Claire that’s not what you think it’s going to be. It is Outlander and some pretty terrible things happen," Heughan hedges. "If time would only allow them to be together! Then we’d probably explore this more."

What about the semi-supernatural implications of Claire's healing abilities and Jamie's brush with the afterlife? "To be honest, I think there’s still stuff to be revealed. I sort of secretly know what it is, but [it'll be] revealed by Diana [Gabaldon, the series creator] with these next few books and the next few seasons," Heughan says. "For the time being, Jamie has chosen to remain here on this planet with Claire and they need each other."

Ep8 @outlander_starz Available now on the @starz app. Have you seen Roger Mac?

There are still three episodes left in the season, ample time for Outlander to play our hearts like Roger Mac's guitar. Villain Stephen Bonnet is still at large and Jamie won't rest until he's six feet under. Series diehards know if Jamie succeeds; Heughan tells me the most exciting moments of the season are saved for the finale regardless.

"I think people that read the books know what happens, but even those people are going to be surprised by the way that it’s been shot and the way that we approached it," Heughan says. "Jamie and Claire'll certainly need each other for the next few episodes, and certainly this finale is going to be really testing for them both." I hope we can handle it.

Halie LeSavage is a writer based in New York.