Dorothy and Leanne’s season-long beef was flame-broiled in Servant‘s latest finale, and the result of its gasp-inducing final moments will undoubtedly change the Turners’ lives forever.

As the two women vie for control of the household, the return of Uncle George can’t be good for anyone (unless he’s actually trying to protect the family from Leanne? Or is Leanne the good guy here? This show!). And what’s the deal with Roscoe these days? Is he possessed? Hypnotized? A cult member all along? We want to hear all of your takes, theories and questions in the comments, but first, let’s recap what went down in the season closer (now available to stream on Apple TV+).

Dorothy wakes up after her doctor-prescribed bedrest. While Sean and Julian say that Frank isn’t allowed back in the house until Dorothy says so, Leanne makes a plea. She wants to squash all of the drama. “I forgive you, I will always forgive you,” she says. Dorothy admits she pushed things too far and apologizes to the nanny. (But is she really sorry, though?) Sean’s no dummy, and tells Julian they need to keep an eye on both of them, “in case this goes south.” (Spoiler alert: That’s exactly where it goes!)

Sean confronts Dorothy about what he believes to be a fake apology. But Dorothy says that when the doctor was there evaluating her, she felt that Sean believed she was capable of hurting Jericho. It was a feeling she’ll never forget.

Meanwhile, Leanne creeps into her crawl space for a little one-on-one time with Aunt Josephine’s dead body. (Because that’s a totally normal thing one does.) When she touches the corpse’s hand, it disintegrates to dust. Later, she asks Julian if he believes his sister’s sorry. Unsurprisingly, it’s a resounding no from him too. 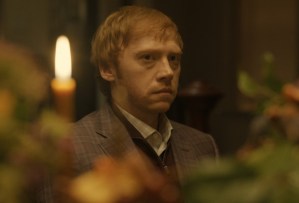 Sean asks Leanne if she had anything to do with Isabelle’s death, but the nanny sidesteps the question and says he’s had too much to drink. He warns her that Dorothy might try to do something stupid, and asks her to please not hurt his wife. “I don’t know why it’s so hard for her to love us,” Leanne says. As the nanny says goodnight and turns to walk upstairs, a framed photo falls off the wall and shatters.

The next morning, Leanne introduces Dorothy to her “friends” (followers?) from the park. She then points Dottie to a network looking for a new anchor. “I’m just trying to show you we’re all on the same side,” she says, as the weird park people look on.

After a fancy meal, Dorothy tells Sean that she isn’t sure if he likes the life they’ve built together. She used to be angry about his newfound faith, but not anymore. As they kiss, mysterious figures lurk outside. It’s Uncle George and Roscoe. Roscoe says it took him a while, but “I got her to trust me,” and that he’ll be able to do what they need. George responds: “Her story begins. It feeds on darkness. Grows stronger each night. Things are decaying. The house is filled with parasites. Do you smell the rot?” What happens now, Roscoe asks? “The end,” the old man replies. 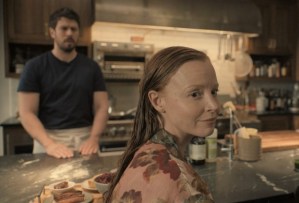 In the middle of the night, Dorothy grabs some photos, and places them in a bag filled with cash and a passport. She zips it closed and scurries to the window where a car awaits. She grabs the baby, but he starts to cry. She finds his binky, but before she can escape, Leanne cuts her off on the stairs. Dorothy tells her she can’t come, but Leanne says she’ll follow her wherever she goes, no matter how far. (OK, creepy.) Dorothy tells her she can have everything else — Sean, the house, her brother, whatever. Leanne grabs Dorothy to prevent her from leaving and screams out to Sean. Sean and Julian rush to the hallway, but Dorothy’s adamant. She’s taking the baby and hightailing it out of there.

As they try to convince her otherwise, Leanne apologizes. But Dorothy’s leaning back on the banister at the top of the stairs, only now it’s covered in bugs and rot. The railing snaps and as she’s about to fall backwards, Leanne grabs the baby. Dorothy, however, falls in slo-mo aaaaall the way to the ground floor, slamming her poor body multiple times as she plummets to the hardwood floor beneath. Julian and Sean’s muffled screams can be heard throughout the house, and as the still-alive (but extremely injured) Dorothy looks up at Leanne, the nanny holds Jericho and menacingly stares back.

Will Dorothy ever be able to walk again? Has Leanne finally usurped control of the Turner house? Vote in our polls below, then hit the Comments!