A young psychiatrist believes she’s being pursued by a malevolent force in this impressive horror feature debut. 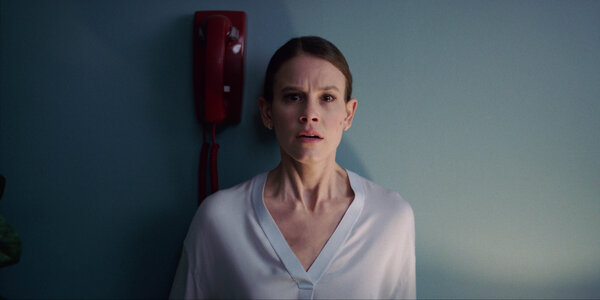 A relentlessly somber, precision-tooled picture whose frights only reinforce the wit of its premise, “Smile” turns our most recognizable sign of pleasure into a terrifying rictus of pain.

And pain is something that Rose (Sosie Bacon), a young clinical psychiatrist, understands, having witnessed her mother’s suicide many years earlier. So when a hysterical patient (Caitlin Stasey) claims that she’s being stalked by a murderous, shape-shifting entity — and that this specter appeared only after she saw an acquaintance brutally kill himself — Rose is immediately empathetic. What happens next is so horrifying it will not only resurrect old terrors but engender new ones, destabilizing Rose and everyone close to her.

Increasingly convinced that she, too, is going to die in some horrible fashion, Rose is plagued by gruesome memories, nightmarish hallucinations and lost stretches of time. Her friends and family — including a distracted sister (Gillian Zinser), distant fiancé (Jessie T. Usher) and concerned supervisor (Kal Penn) — presume psychological damage. Only her ex-boyfriend (Kyle Gallner), a sympathetic police detective, is willing to help her research anyone who might have had a similar experience. And, crucially, survived.

In its thematic use of unprocessed trauma and, especially, its presentation of death as a kind of viral infection passed from one person to another, “Smile” embraces an immediately recognizable horror-movie setup. In the past, this has centered on cursed pieces of technology, like the videotape in “The Ring” (2002) and the cellphone in “One Missed Call” (2005). Here, though, death is dealt simply by witnessing an act, and in that sense the movie’s closest cousin may be David Robert Mitchell’s immensely creepy “It Follows” (2015). In that film, the malevolent virus was transferred through sex; here, the medium is suicide, and the bloodier the better.

Yet this first feature from the writer and director Parker Finn (expanding his 2020 short film, “Laura Hasn’t Slept”) doesn’t feel like a retread: Even the familiar luckless pet seems included more as a wink-wink to the audience than a lazy crib. The jump scares are shockingly persuasive, gaining considerable oomph from Tom Woodruff Jr.’s imaginative practical effects and Charlie Sarroff’s tipsy camera angles. An unexpected color palette sets a dolorous tone without being suffocatingly gloomy, and Bacon’s performance, both shaky and determined, ensures that the very real agony of mental illness and its stigmatization register as strongly as any supernatural pain. Like the emotional injury they represent, the smiles in “Smile” are — in one case, quite literally — bleeding wounds that can’t be stanched.