Sounds irresponsible Charlie Stayt skewers boss over rail strikes What is the problem?

Charlie Stayt and Naga Munchetty were back on Saturday to present the latest news headlines on BBC Breakfast. However, things soon took a turn when Charlie spoke with Rail Delivery Group chair, Steve Montgomery, who joined the show to discuss the further rail strikes.

Ahead of the weekend, it was warned there would be another railway strike as disputes regarding pay and working conditions continued.

Staff from nine companies including Southeastern, London Overground and Greater Anglia had walked out to strike.

With unions calling for their wages to rise in line with the cost of living, rail funders announced they could only fund a rise through reform.

To discuss this further Steve from the Rail Delivery Group appeared on the Breakfast show. 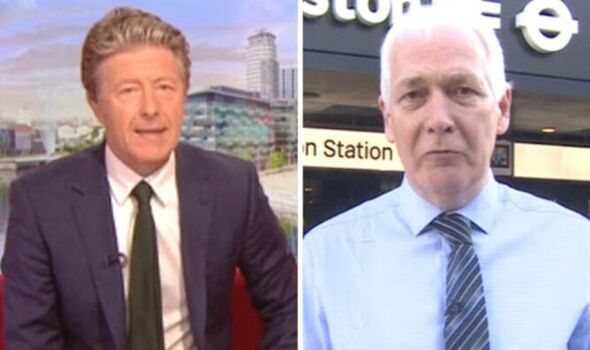 As Steve stood in front of an unusually empty Euston station, he began to be grilled by a fiery Charlie who wanted answers about the strikes.

After Steve warned passengers to check before they travel, Charlie asked: “Why can’t the train rail companies come to an agreement with the unions, what is the problem?”

Steve hit back: “The issue is as we’ve said all along, the industry has received £16billion of taxpayers’ subsidiaries through the pandemic to keep it operating.

“Albeit revenue has grown back up to be 80 percent of what pre-pandemic levels are, we’ll still get percent of the costs, so we want to give our staff a pay increase of course we do.

“What we’re trying to do is work with the trade unions to try and look at areas of reform and modernisation of the railway, so we can provide a better service for customers through it all.”

He added: “And make the industry more self-sufficient, so we don’t need to keep taking more taxpayers’ money that’s needed in other areas.”

After Steve revealed bosses have not been able to “talk in detail with the unions,” Charlie fired back: “That sounds really irresponsible.”

Defending the reasons why, Steve replied: “We have been trying to talk, we had talked previously a number of months ago.”