Holly Willoughby shows off sparkling blue skirt on This Morning

Eamonn Holmes, 60, and his wife Ruth Langsford, 60, are known for hosting the Friday editions of the ITV show, although from January the couple will only be on hand to front the programme during the holiday breaks. This Morning viewers were hoping to see the pair on-screen today before the presenting changes come into effect but were greeted by Phillip Schofield, 58, and Holly Willoughby, 39, who usually host proceedings from Monday to Thursdays. The shake-up to the presenting line-up for Friday’s episode has been undertaken, however, as the show’s most popular stars take part in a pantomime to lift fans spirits. 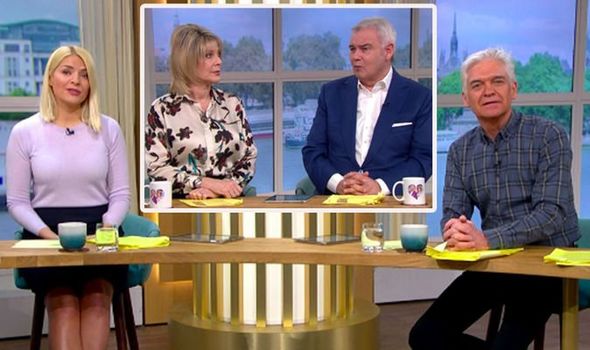 Taking to Twitter, viewers were not pleased with the change to the show as one wrote: “Where’s @RuthieeL and @EamonnHolmes @thismorning?”

Another added: “#thismorning how come Phil and Holly are presenting this morning? It’s confusing my little brain as to what day it is!”

Whilst a third remarked on the social media platform: “#thismorning where’s @EamonnHolmes and @RuthieeL turning over?”

And a fourth weighed in: “I look forward to Friday’s @thismorning all week, with the fabulous @RuthieeL and @EamonnHolmes. I have just had to turn it off.”