“Zatima” fans were so understandably focused on the bombshell Karen dropped last week on Tyler Perry’s Sistas that they might have missed the flawless acting Devale Ellis brought as Zac.

Just before Karen told Zac she was pregnant, Ellis filled his character’s eyes with tears as he brokenheartedly told her there was no future for them despite loving each other. Zac said he and Fatima worked better as a couple because she encouraged Zac and helped him believe in himself.

“When we get the scripts, I purposely don’t read everyone’s storylines,” Ellis reveals to TVLine. “For me as an actor perfecting my craft, I don’t want to know what the other character is going to say or do in advance. I want to treat it as a real moment and react as organically and genuinely as possible, and you can’t do that if you know the other character’s backstory.”

That’s why Ellis’ eyes teared up so readily because that’s the way he would’ve responded in real life, he says. 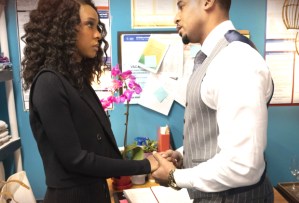 “I don’t want to know what’s going on with Karen and Aaron in advance when Ebony [Obsidian] approaches me in character,” Ellis adds. “If I did know, it might trigger me to do something different in my performance. You might not believe me, but I really don’t know how things are going to end for Karen.”

But Ellis knows how things are going to end for Zac and Fatima. Last week, it was announced that the couple’s spinoff series Tyler Perry’s Zatima is currently shooting and will premiere on BET+ in 2022.

“I love love, and I love the idea of them having a positive and healthy relationship,” Ellis shares. “With everything that is going on with Karen and Hayden, there were times where even I was like, ‘Is this couple going to make it?’ But the way Tyler wrote it is very impressive because it’s not a fairy tale. Zac and Fatima are trying to be honest and communicate with each other no matter what, and that’s inspiring. I get why fans love them so much.” 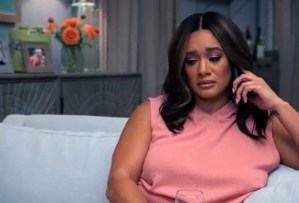 The positivity that Zac and Fatima share can’t be underestimated, Ellis continues.

“This is why I think Zac and Karen ultimately can’t be together,” Ellis concludes. “It goes back to Zac’s mom and grandmother and aunts. No woman ever spoke encouragingly and positively to Zac until he met Fatima. When he heard that recording from Hayden, it was easy for him to think the worst because he was scared Fatima was yet another woman putting him down. Zac isn’t used to having positive interactions with women. That’s why he got defensive first and apologized later. Fatima is helping him grow up and trust women more.”

Are you nervous about Karen’s pregnancy news, and do you think it might be Zac’s baby? Drop your thoughts in the comments.