RETIRED GP Andrew Townsley got within touching distance of making Who Wants To A Millionaire? history on tonight’s show, only to fall at the final hurdle.

The Glasgow-based doctor, who uses a wheelchair because of progressive multiple sclerosis, took home £500,000 after deciding to not take a punt on the final question — despite knowing the answer. 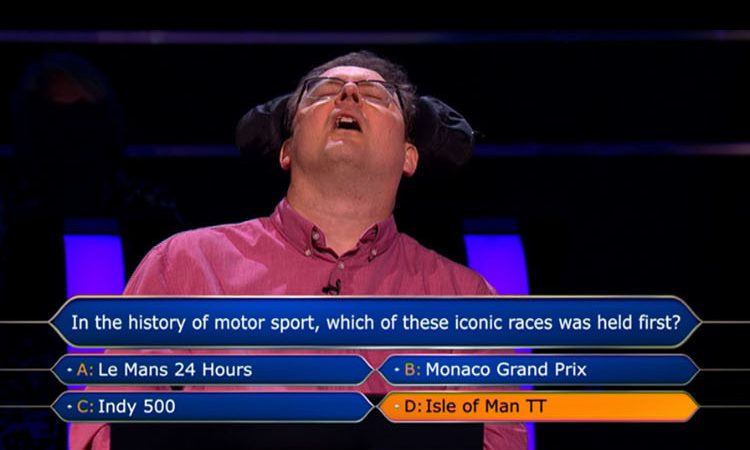 But winning the money was the last thing on his mind. He was more concerned about the lengths to which show bosses had gone to enable him to take part.

It spurred him to victory in the fastest finger first round.

In an exclusive interview with The Sun, he said: “Going through my mind was the time the producers had spent to raise the stage for me to get on with my wheelchair.

“Having them spend so much time on doing this for me, I thought I’d try to get out there first!

“The show went very quick. That was my abiding memory of it. I found myself suddenly running out of questions in no time at all.”

The only thing standing between dad-of-two Andrew, 53, and becoming the sixth ever winner of the show was a tricky question about the oldest motorsport event from a choice of four.

And despite having one lifeline intact — Phone A Friend — and an inkling he knew the answer, he decided not to risk dropping back to his £64,000 safety net.

He revealed: “I was quite happy with the success up to that point. 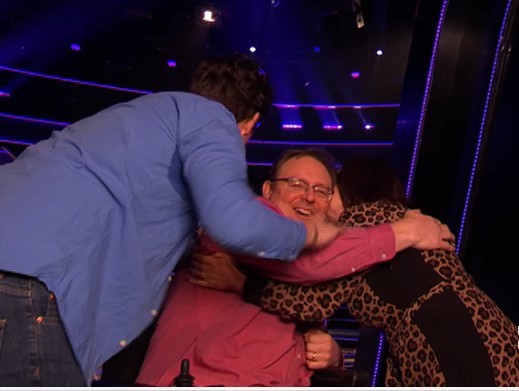 "I knew it was between the TT and the Indy, and my general luck is that if I was to guess something on an even-money bet that it would be the other one!

“It was a huge bet to take, and I didn’t know the answer for sure. I thought it probably was the TT. But was I prepared to risk it?”

After taking the money, Andrew was given the chance by host Jeremy Clarkson to attempt the question without risk — and got it right.

Asked how close he was to taking the plunge for real, Andrew added: “Oh I was close. It was very tempting, being offered that much. 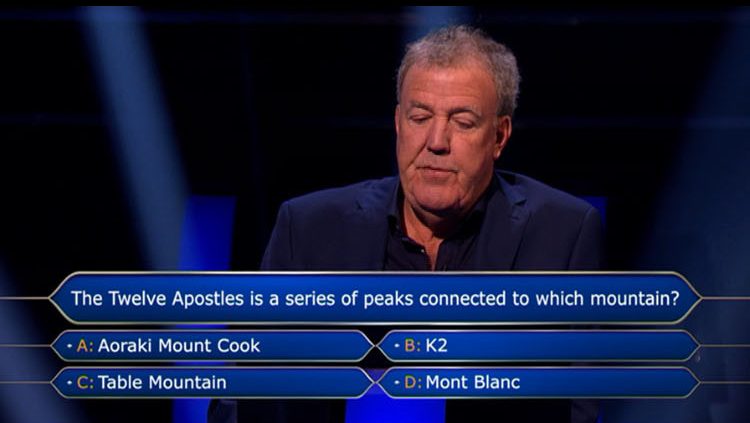 Millions watched Andrew sail through the early questions, barely breaking sweat as he got to the £125,000 mark without even debating using a lifeline.

It was a performance host Jeremy, 60, said will go down in TV history.

So it’s little surprise that just like previous big winners on the ITV juggernaut, this wasn’t his first appearance on a quiz show.

Since retiring five years ago because of his health he has tackled BBC’s Impossible and Pointless and Channel 4’s Fifteen To One.

He said: “I’ve loved quizzes from an early age, but until I stopped working I didn’t really have an opportunity to try for any of these.

“A lot of the shows, once you get into the process of being on one, from the interview to taking part, are so close together I could never have got the time off.”

Andrew’s career came to a sudden end when his condition became so bad he could no longer treat patients.

Progressive MS, which he was diagnosed with in 2000, causes muscle weakness and spasms.

He said: “First the MS took the legs away from me, now my left arm doesn’t work very well. I could just about do something with no legs, but being only one-handed, it was difficult to examine patients.

“Everything takes longer and is more awkward. I just couldn’t do the job any more.

“I can no longer drive as I don’t have enough control over my arms. Just getting to work for 9 would’ve seen me getting up at 5.30.” 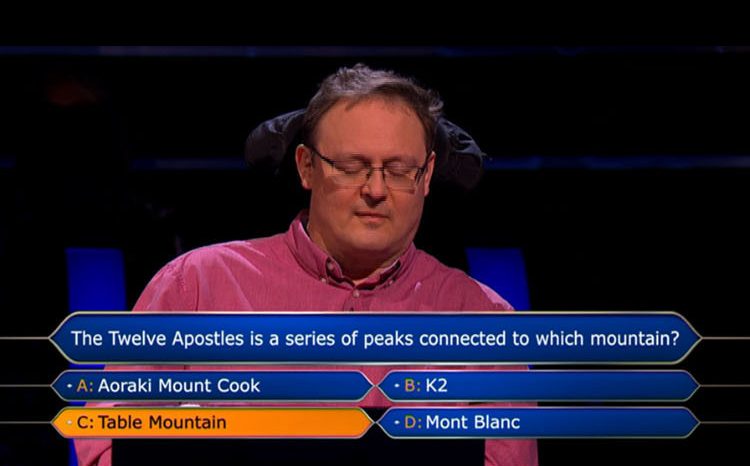 Unfortunately for both Andrew and the estimated 15,000 UK sufferers of the disability, there is no current cure — only treatments to help alleviate some symptoms.

Andrew, whose wife Paddy is also a retired doctor, revealed: “Sometimes having a little knowledge is a dangerous thing. It can make you a bit more depressed about your outcome.

“And it means that probably my plans are slightly more conservative than the next person.”

Early in the show he told Jeremy he wanted to take Paddy to see ­Niagara Falls in Ontario, Canada.

But with half a million now in the coffers, what were his plans?

“It was mostly travel,” he says, though the lockdown since the show was filmed has thwarted most of them.

He added: “My holiday plans have all fallen through a little. We were hopefully going to go and see the cricket in Australia, but again that’s looking a bit doubtful.

“I want to ensure there’s a bit for my two sons, who are 19 and 22, then having a bit of a financial cushion in this unsettled world.

“I honestly don’t know what my long-term plans will be. With my MS, it just means planning, and anything I do is more expensive.”

His appearance is well-timed too, given ITV has just aired Quiz, the story of how Major Charles Ingram cheated to win the jackpot in 2001.

Andrew joked: “It was great drama. He got found guilty and he still claims to be innocent, but I think we’ll find out at the same time we find out whether (President John F Kennedy assassin) Lee Harvey Oswald acted alone . . . ” 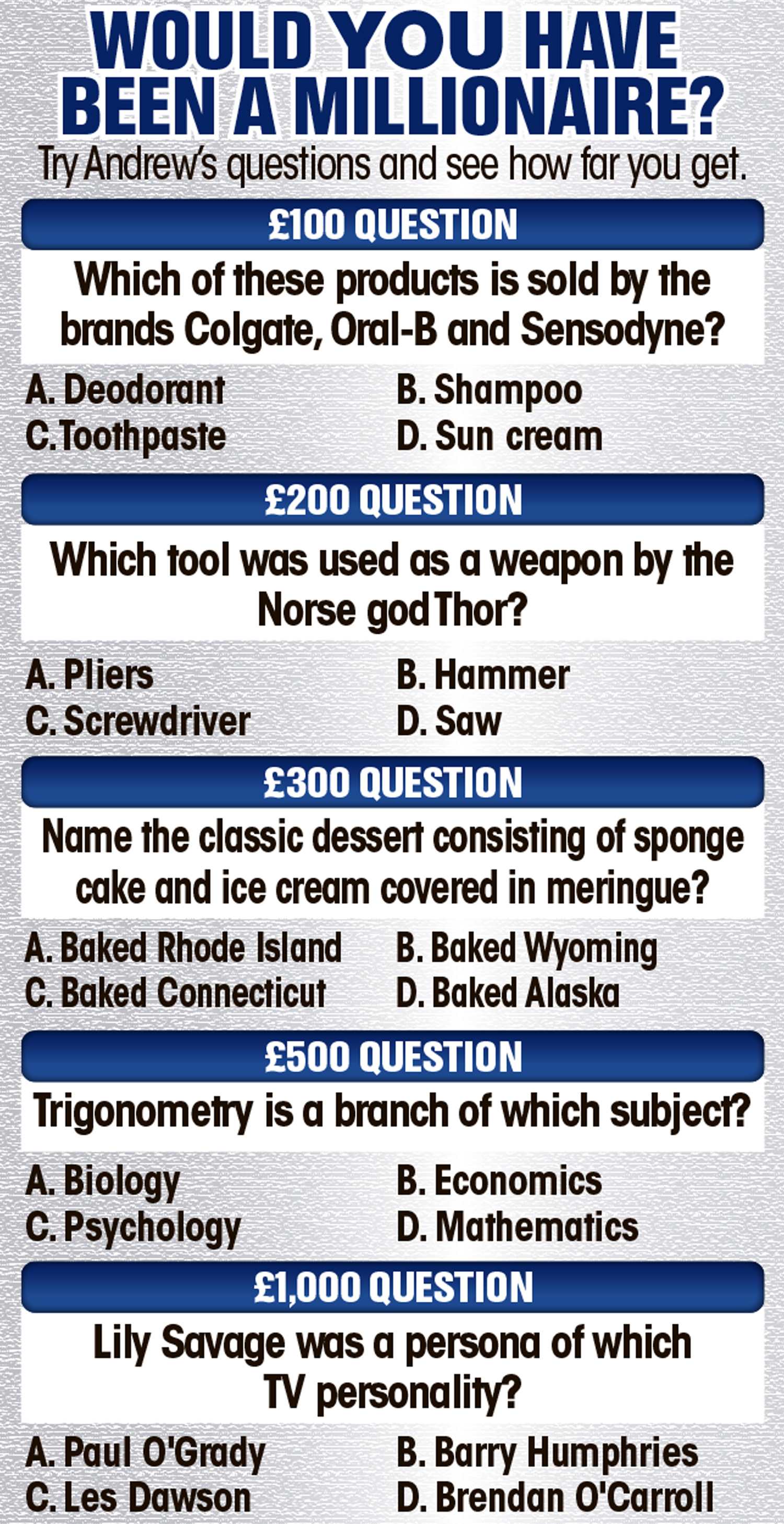 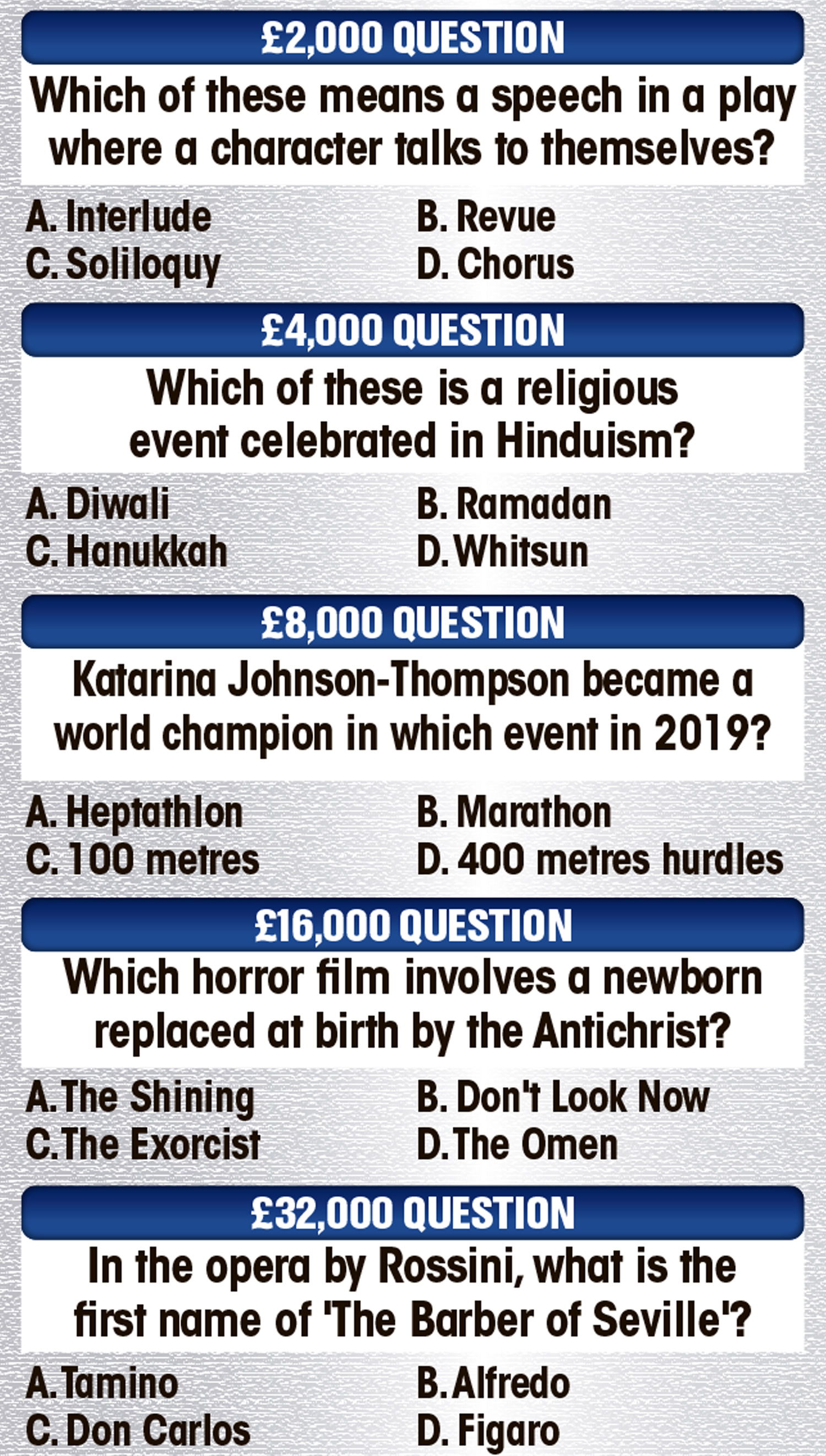 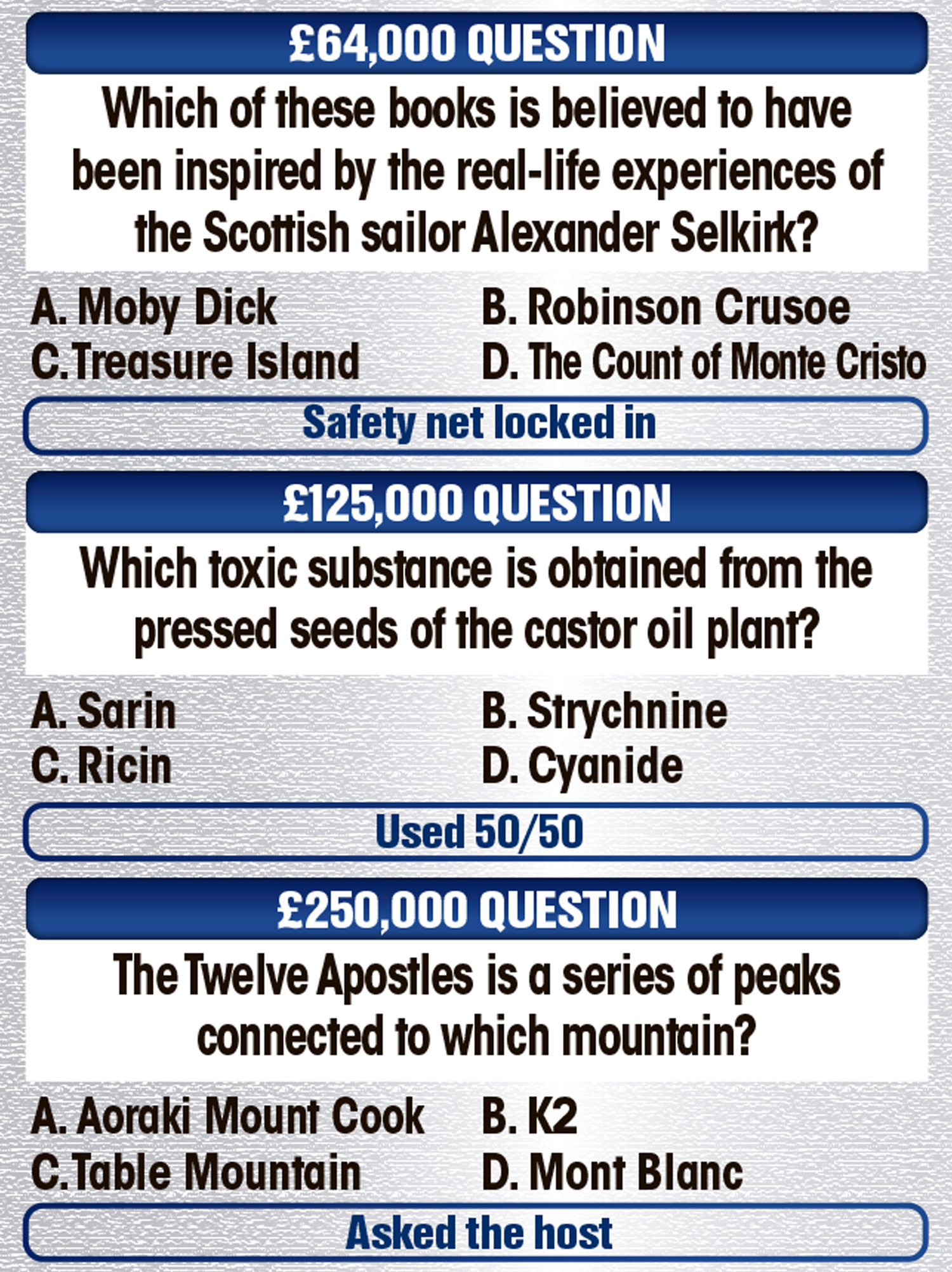 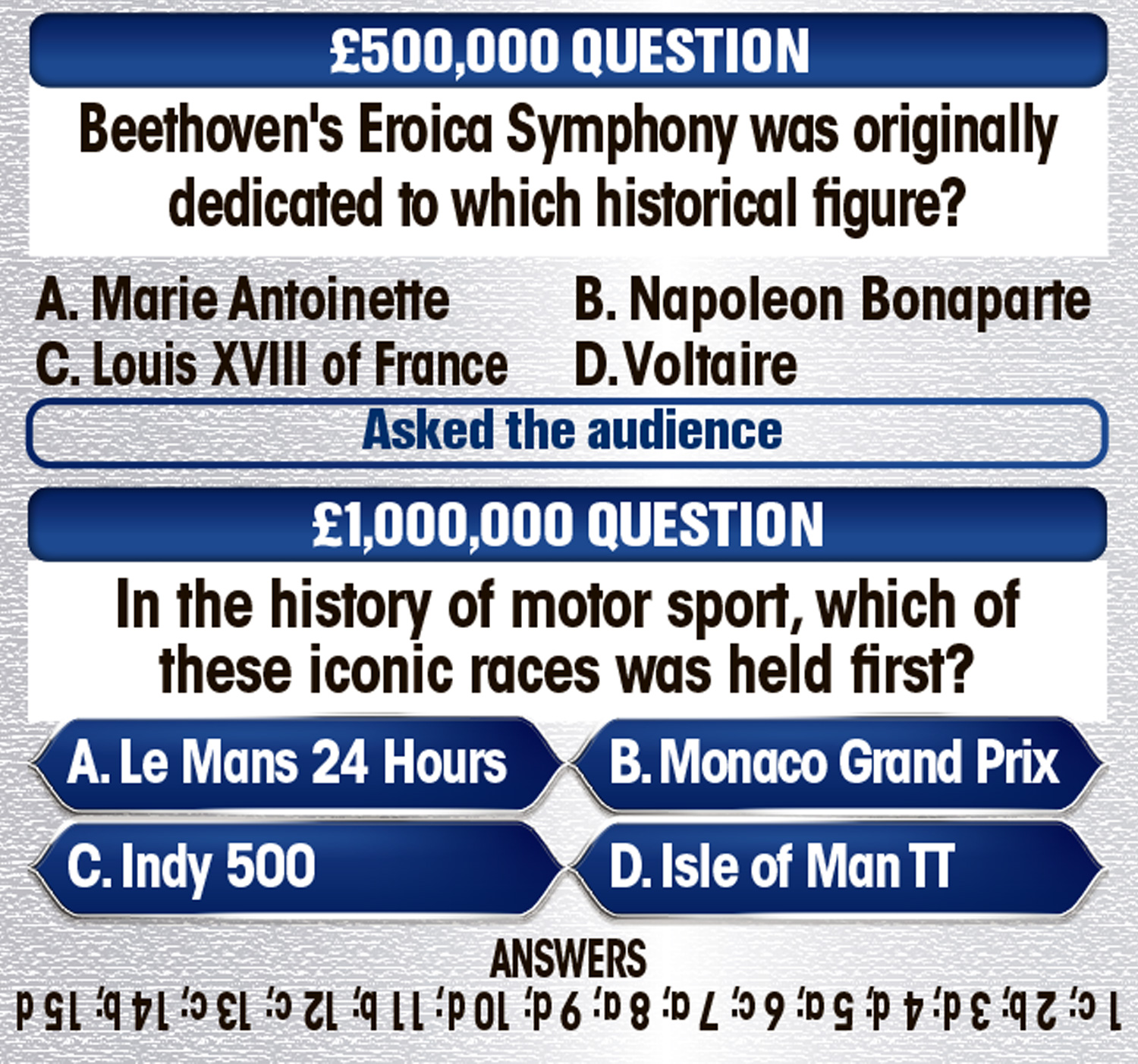