Home » World News » 661 pounds, 13 feet long and a mouth 'the size of a banana': The largest freshwater fish ever caught

661 pounds, 13 feet long and a mouth 'the size of a banana': The largest freshwater fish ever caught 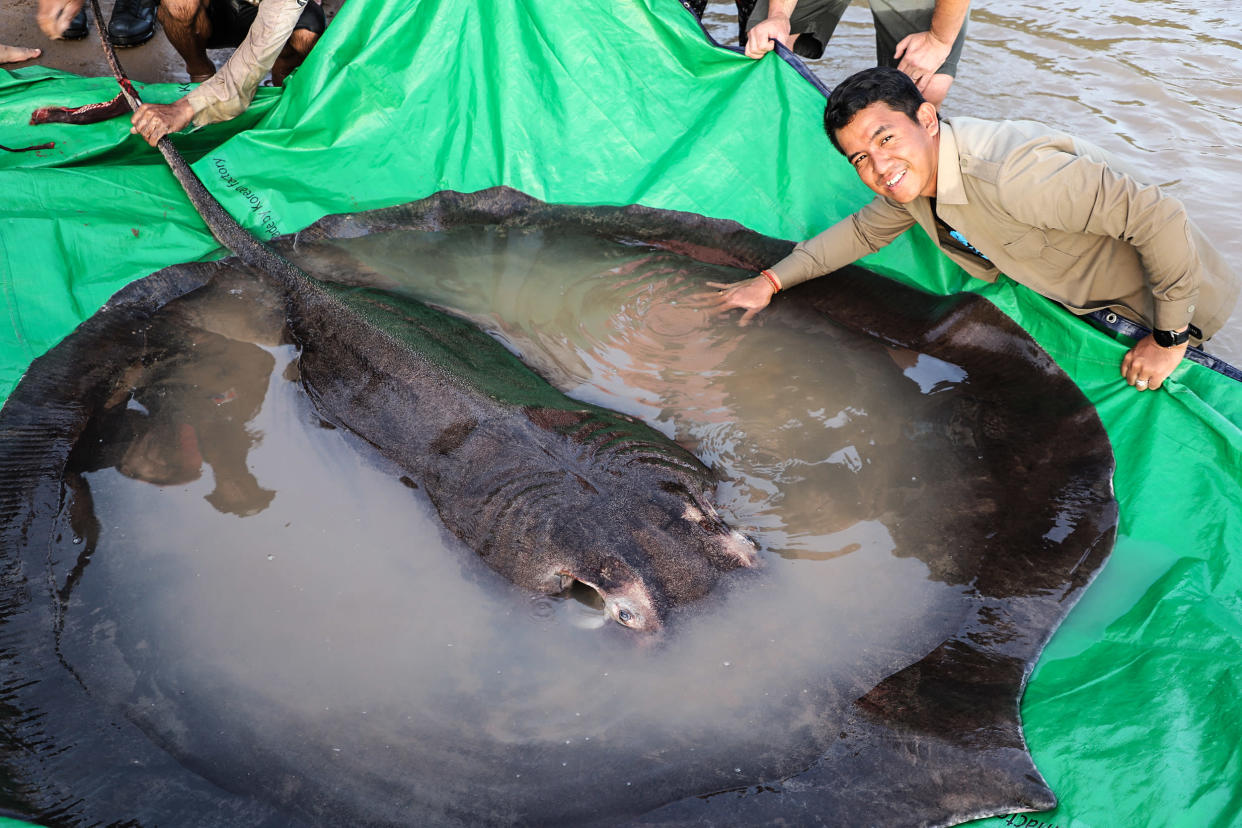 A fisherman in northern Cambodia hooked what researchers say is the world’s largest freshwater fish — a giant stingray that scientists know relatively little about.

The fisherman, 42, caught the 661-pound fish — which measured about 13 feet in length — near a remote island on the Mekong River in the Stung Treng area. A team of scientists from the Wonders of Mekong research project helped tag, measure and weigh the ray before it was released back into the river. The research group believes it was healthy when released and expects it to survive.

The tag — which emits an acoustic signal — will allow researchers to track the fish’s movements and, they hope, learn more about its species’ behavior in the Mekong.

The catch “highlights how little we know about a lot of these giant freshwater fish,” said Zeb Hogan, a fish biologist at the University of Nevada. “You have a fish that’s now the record holder for the world’s largest freshwater fish, and we know little about it.”

The fisherman, Moul Thun, caught the giant stingray with a hook and line on the evening of June 13, and then contacted researchers the next morning.

Researchers with the Wonders of Mekong were already in northern Cambodia to install underwater receivers as part of a project to track migratory fish in the river.

“It’s a particularly healthy stretch of the river with a lot of deep pools — pools up to 90 meters deep,” said Hogan, who is also the host of National Geographic’s “Monster Fish” television series. “We started focusing on this area as a stretch of river that’s particularly important for biodiversity and fisheries, and as a last refuge for these big species.”

For several months, the research group has been in contact with local fishermen, asking them to get in touch if they landed a significant catch. The group has helped with two other large giant freshwater stingray releases in recent months. The fisherman who caught the record ray was paid market price for his catch.

“It works because the fish is not a highly prized food fish,” Hogan said.

Hogan said little is known about the giant freshwater stingray. The creature has a mouth about “the size of a banana” with no teeth, but with “gripping pads” used to crush prey.

“They’re on the bottom finding shrimps, mollusks and small fish. They can suck them up with this banana-shaped mouth and crush them,” Hogan said.

Fishermen have reported three catches of female stingrays in the area during the past two months, Hogan said. The scientists suspect the site could be an important seasonal gathering site for giant freshwater stingrays, and might serve as a pupping ground for young.

The research group plans to tag and track a few hundred big fish in the Mekong River to better understand fish migrations and local habitat in the upper Cambodian Mekong.

“There’s potential for hydropower development right where these stingrays were caught,” Hogan said. “We want to understand the importance of this area before there’s development, potentially in an unsustainable way.”

Hogan said the Cambodian government has expressed interest in developing a conservation plan for the giant freshwater stingrays.

The upper Mekong is also habitat for Mekong giant catfish and other species of large freshwater fish.

Worldwide, “most of these species of big fish are in trouble, their populations are declining. The Chinese paddlefish was declared extinct in 2020,” Hogan said. “We need to do more to protect these freshwater habitats.”

The former world record holding fish — a 646-pound Mekong giant catfish — was also caught on the Mekong River in 2005, in Thailand.

There are other, larger recorded catches of fish that spend time in both fresh and saltwater, such as the beluga sturgeon.

“This is the record for the largest fish that has spent its entire life in freshwater,” Hogan said of the recently caught ray.