Former Essendon footballer Andrew Lovett has admitted to repeatedly assaulting a woman during a 22-month span of physical and psychological violence, which included punching, kicking and spitting on the victim, pouring beer over her, making threats and sending abusive messages.

Lovett faced Dandenong Magistrates Court on Thursday, appearing via a video link from custody, to plead guilty to 24 charges including multiple counts of assault and breaching court orders. A further 73 charges were withdrawn by prosecutors. 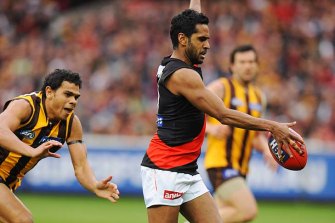 Between February 2020 and December last year, the court heard, Lovett assaulted the woman in her home on several occasions, including two attacks where he knocked her out, once by punching and kicking the woman when she was in the shower, and the other by choking her and pushing her over.

Prosecutor Andrew Sprague detailed a series of violent incidents which began on February 10, 2020, when Lovett grabbed the woman by the arm, causing bruising, during an argument.

The violence escalated over the following months, particularly when Lovett drank alcohol, and in the hours after Lovett attended the Essendon-Hawthorn AFL game on March 20 last year, he went to the woman’s home and began screaming at her while she was in the shower, Mr Sprague said.

The former footballer punched the victim and kicked her while she lay in the foetal position, before she lost consciousness. 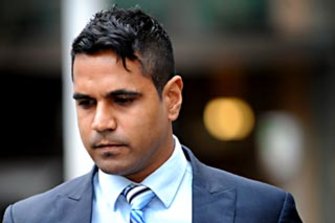 On June 8 last year, Lovett became angry and aggressive when he couldn’t unlock the woman’s phone and struck her to the face. He then put his hands around the woman’s neck and choked her, and pushed her towards the bath. She hit her head and lost consciousness.

When she came to, the woman went to the kitchen and armed herself with a knife. In the kitchen, the court heard, Lovett lunged for the woman and grabbed her arm and the knife broke the skin on Lovett’s chest.

When the woman left the house and drove away, Lovett chased the car along the street.

“She believed that the accused was trying to kill her,” Mr Sprague told magistrate Jason Ong.

As Lovett, 39, sat with his arms crossed, the woman told the plea hearing the period had been “a horror show”.

“He broke me in every single way when he took off his mask and revealed his true self,” she said.

Lovett had caused her “nothing but torture and heartache”, she said.

Lovett, who played 88 games for the Bombers from 2005 to 2009, has spent the past three months in custody after his arrest on December 9 for breaching court orders over the preceding months by calling the woman, sending her text and Facebook messages, visiting her home and having his brother contact her.

He was arrested in July last year and granted bail.

Mr Sprague said Lovett’s other assaults included him smashing the woman’s phone on July 4, 2020, punching her to the side of the face a fortnight later, and throwing beer over her a further two weeks later.

After an argument in January last year he sent her the message: “I hope you, your mum and your nan pass away, you c—.” The woman’s grandmother was ill at the time.

In April last year, he spat in the woman’s face, poured beer over her and kicked her while she was on the floor. He again spat at her when drunk after the Essendon-Collingwood game on Anzac Day.

Across the 22 months, Lovett also tried to provoke the woman into arguments, blamed her for his anger, threatened to have bikies “run through” her house and regularly went through her phone.

The hearing has been adjourned until March 17.