Home » World News » After Canada, US truckers decided to start their own 'convoys'. What are they protesting?

After Canada, US truckers decided to start their own 'convoys'. What are they protesting?

What began as a protest against vaccine mandates in Canada's capital morphed into a blockade of the busiest U.S. border crossing and spurred copycat efforts worldwide.

A handful of trucker-led protests are expected to converge on the U.S. capital in the coming days in what experts said has become a catch-all movement against perceived government overreach.

"What we're seeing is that people are using this as an excuse to just express a whole bunch of other grievances against the Biden administration or perceived threats on their freedom," said Cynthia Miller-Idriss, director of American University's Polarization and Extremism Research and Innovation Lab. "This might be about mandates but not really about mandates in the long run."

Multiple convoys launched or plan to this week, and officials are preparing for potential gridlock in Washington and the Beltway – a 64-mile roadway through Virginia and Maryland that circles the District of Columbia – before the State of the Union on March 1.

"The trucker convoys are kind of the latest in what I would say has been happening for over two years, where large groups of people from across the political spectrum, from a variety of different groups – ordinary voters, but also some organized extremists – converge around certain events," Miller-Idriss said.

Miller-Idriss referenced protests over Second Amendment rights and shelter-in-place orders, as well as the Jan. 6 insurrection at the U.S. Capitol.

"It's something that starts as a peaceful protest generally – constitutionally protected, totally peaceful protest – but that sometimes gets co-opted or taken up by other groups that may have bad intentions or are misrepresenting even what the original intentions are," she said. 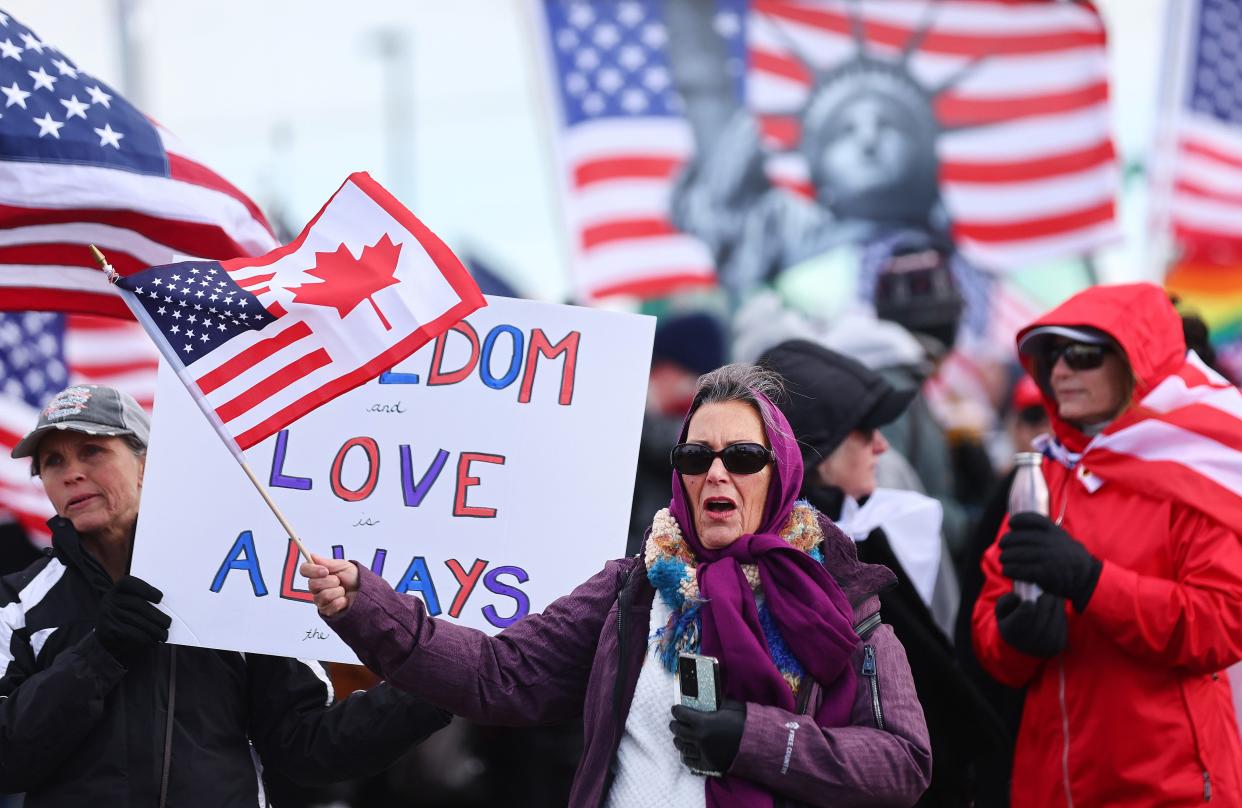 One group under the banner "The People’s Convoy" left from Southern California and plans toarrive in the "DC Beltway area" by March 5, according to the group's website. The route passes through Arizona, New Mexico, Texas, Oklahoma, Missouri, Illinois, Indiana, Ohio, Pennsylvania and Maryland.

Livestream videos of the kickoff event in Adelanto, California, on Wednesday showed a crowd of several dozen people, some wearing red Trump hats and others waving American, Canadian and "Don't Tread on Me" flags. 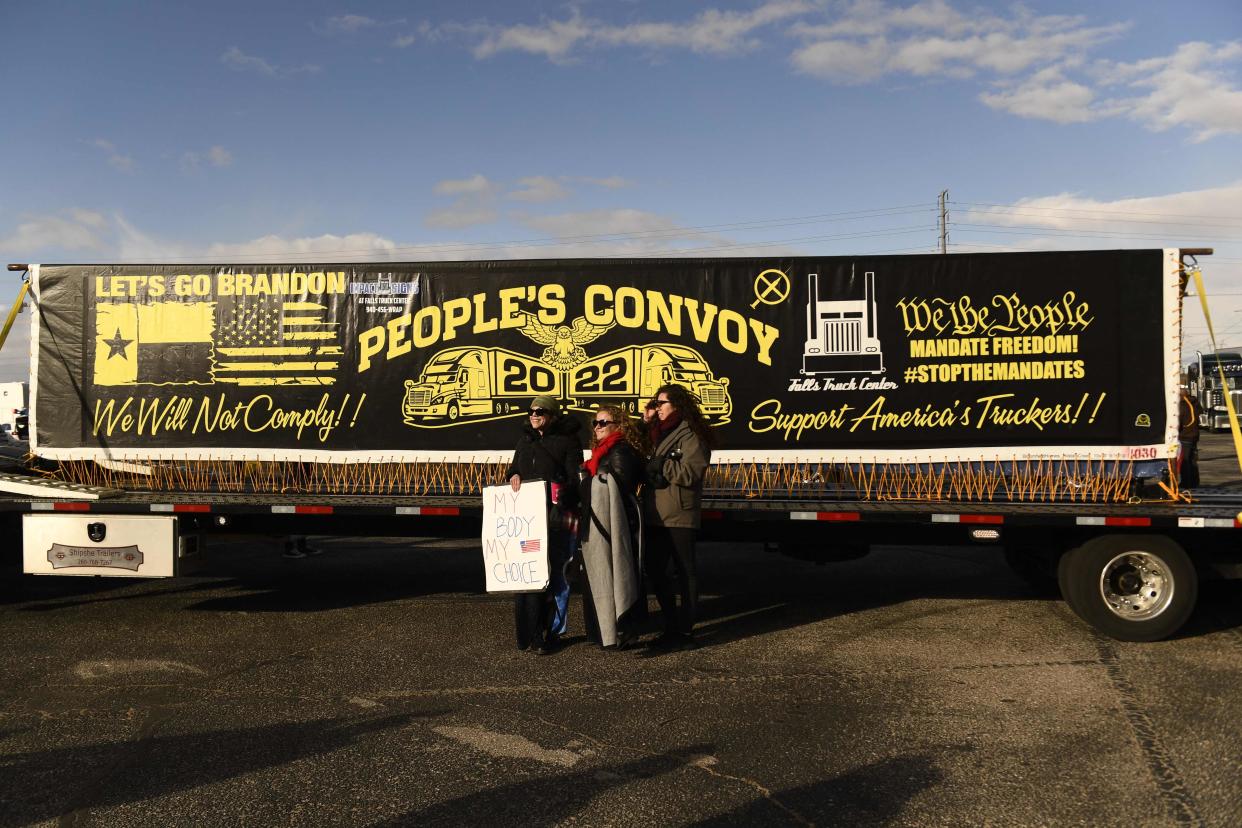 A news release from the group called for an end to COVID-19 mandates and states of emergency. The effort is led by "American truckers," along with "blue-collar workers" and "freedom-loving supporters from all walks of life," the website says.

The website claims it has raised nearly $500,000 and charges thousands of dollars to "spend the day in a shotgun seat on a truck."

At least two other convoys are planned in conjunction with the same group, branching through the Northeast and Southeast, according to the group's Facebook page. 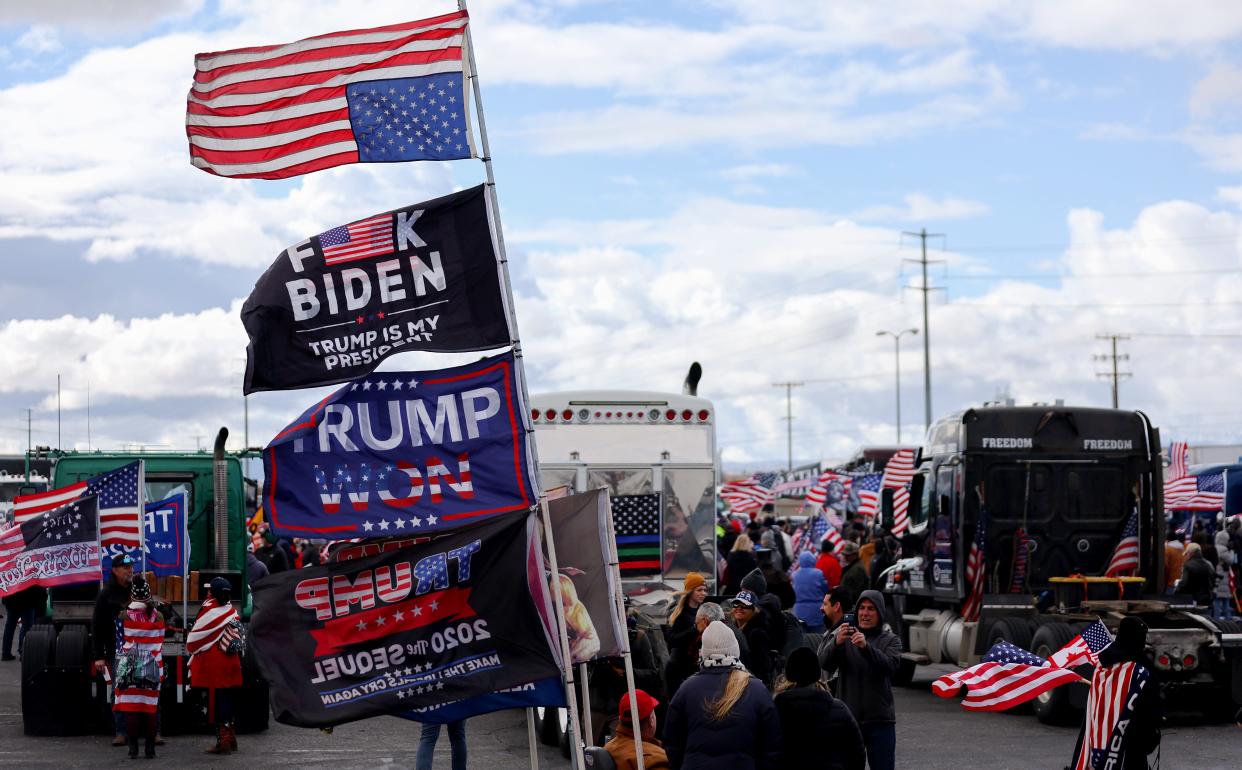 Truckers in the U.S. and Canada, where nearly 90% of truckers are vaccinated, have denounced the protests. TheAmerican Trucking Associations said this month it strongly opposes "any protest activities that disrupt public safety and compromise the economic and national security of the United States."

A group from Pennsylvania left Wednesday and planned to arrive outside Washington. Bob Bolus, who owns a towing business in Scranton, told local news outlets he was leading the protest.

Bolus told WJLA-TV he was protesting COVID-19 mandates, inflation and illegal immigration. He told PennLive.com he was protesting critical race theory and foreign oil imports and calling for "justice" for Ashli Babbitt, who was fatally shot by a Capitol Police officer during the Jan. 6 insurrection. 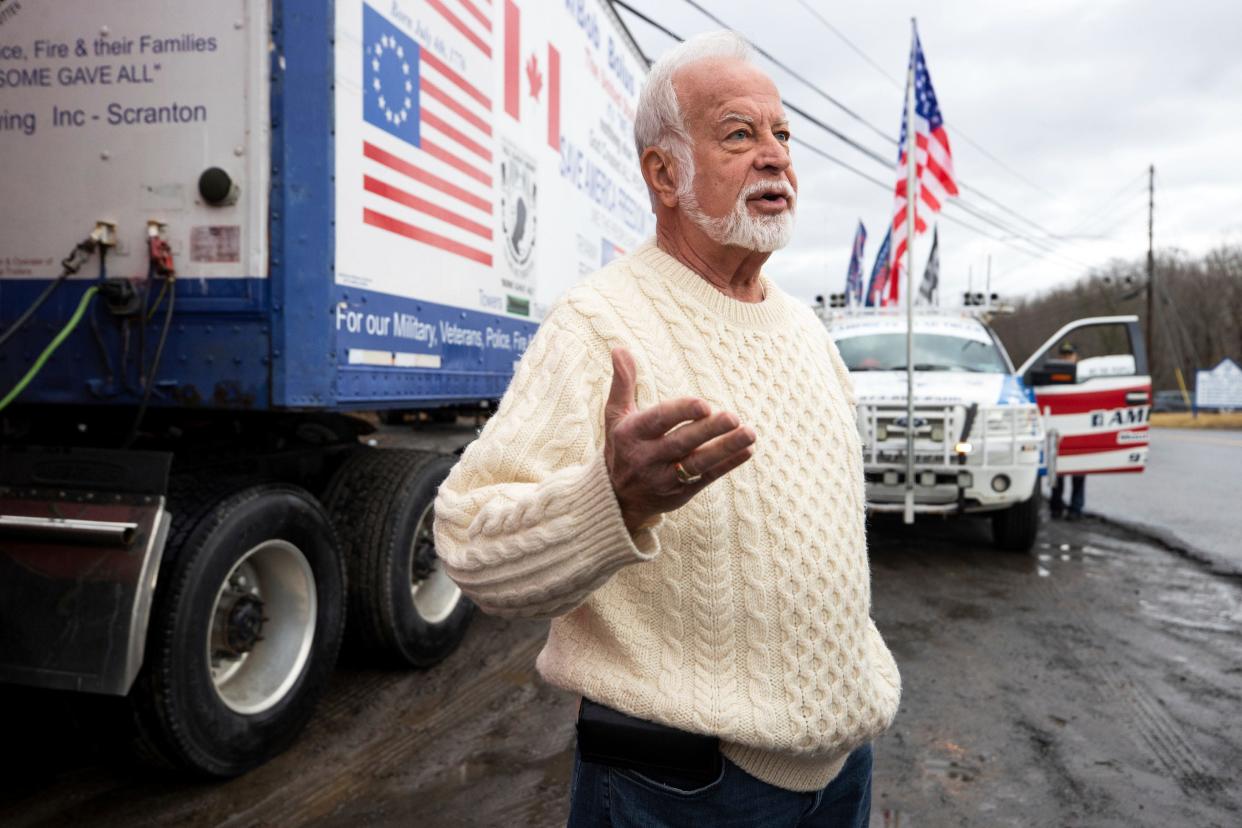 A memo sent to U.S. Senate staffers Wednesday warned that "potential impacts of truck convoys may be expected to coincide with the State of the Union Address to Congress, and extend through mid-March."

The memo referred to "similar recent events" in Canada and said staff "should anticipate that these convoys may cause higher than normal traffic volumes and possible transportation disruptions on and around roadways in the Washington, D.C., area, and along various main roadways throughout the country."

The U.S. Capitol Police said it was aware of the convoys. The Pentagon approved 400 District of Columbia troops, 300 from outside the city and 50 "large tactical vehicles" to help keep traffic flowing, the D.C. National Guard said in a statement. 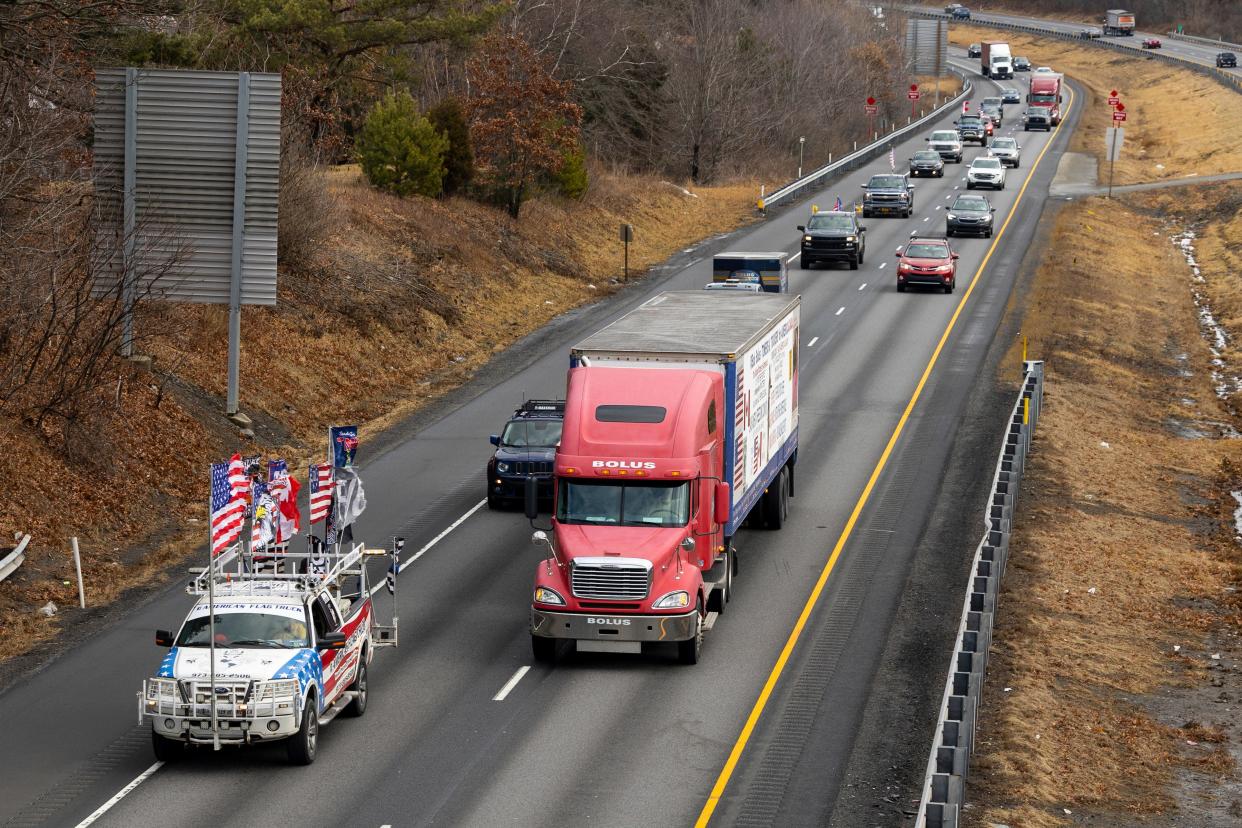 Heidi Beirich, co-founder of the Global Project Against Hate and Extremism, said it's important for law enforcement to prepare for the protests while not overpreparing and alarming residents.

"Compared to the online chatter before Jan. 6, where it was really clear that something serious was going to happen, this is just more muddled," Beirich said.

Rallies in the wake of Jan. 6 by people with similar grievances or supporting those jailed in the insurrection have had smaller-than-expected turnouts. Reports of a possible trucker convoy protest in Los Angeles around the Super Bowl did not materialize. 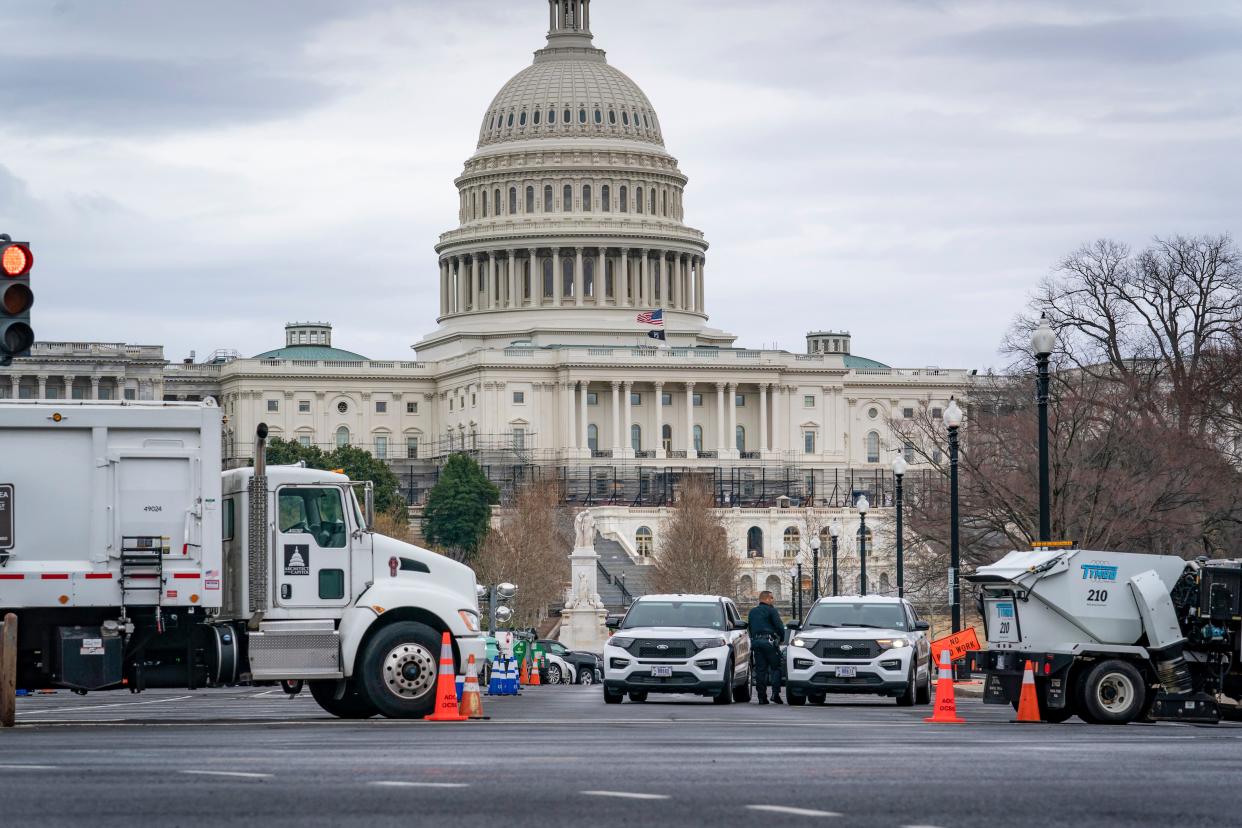 Former President Donald Trump and some Republican leaders have spoken out in support of the protests in Canada, and Sen. Rand Paul, R-Ky., called for convoys in the U.S. Fox News host Tucker Carlson has sold "I ❤️ TrUCKERs" T-shirts on his website.

It was not clear how many people would join the convoys or how long the groups would stay.

"Some of the chatter online says they're just going to be there for a couple of days. But if it's like Ottawa, they come in and they're not leaving," Miller-Idris said.

As COVID-19 cases fall and more jurisdictions lift pandemic-related restrictions, such as indoor mask requirements, it's important demonstrators ensure they're not "protesting something that might not exist anymore," Miller-Idriss said.

This article originally appeared on USA TODAY: Freedom Convoy trucker protest to DC isn't about COVID: Who are they?