“Everything will be OK,” read 19-year-old Angel’s T-shirt as the dancer and taekwondo champion joined anti-coup protesters in Myanmar on Wednesday.

But she must have known it might not be OK – she left details of her blood group, a contact number and a request to donate her body in the event of her death.

Angel, also known as Kyal Sin, was killed by a shot to the head on the streets of Mandalay as she fought for a tentative democracy in which she had proudly voted for the first time last year, an election overturned by the February 1 coup.

Seen in pictures of her at the protest, the phrase from Angel’s T-shirt quickly went viral on social media as users posted it in defiance of security forces who killed at least 18 people around Myanmar over the day.

A spokesman for the junta did not respond to a request for comment on the killings.

Myat Thu, who was with Angel at the protests, recalled a brave young woman who kicked open a water pipe so that protesters could wash tear gas from their eyes, and who lobbed a tear gas cannister back towards the police. 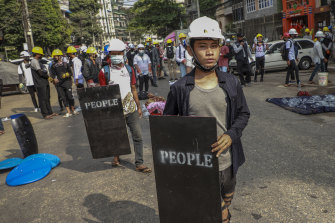 Anti-coup protesters with makeshift shields during a rally in Yangon, Myanmar on Wednesday.Credit:AP

“When the police opened fire, she told me ‘Sit! Sit! Bullets will hit you. You look like you’re on a stage’,” recalled Myat Thu, 23. “She cared for and protected others as a comrade.”

Myat Thu said he and Angel were among hundreds who had gathered peacefully in Myanmar’s second city to denounce the coup and call for the release of detained leader Aung San Suu Kyi.

Before the police assault, Angel can be heard on video shouting, “We won’t run” and “blood must not be shed”.

First police hit them with tear-gas, Myat Thu said. Then the bullets came. Pictures taken before she was killed show Angel lying down for cover beside a protest banner, with her head slightly raised. 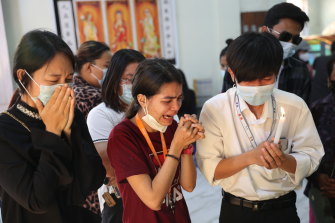 Friends of Kyal Sin –  also known as Angel, and by her Chinese name Deng Jia Xi – visit her body.Credit:AP

Everyone scattered, Myat Thu said. It was only later that he got the message: one girl was dead.

“I didn’t know that it was her,” Myat Thu said, but pictures soon appeared on Facebook showing her lying beside another victim.

Wednesday’s bloodletting more than doubled the death toll at protests that have drawn hundreds of thousands of people to Myanmar’s streets. The army, which says one policeman has died, has said it will act against “riotous protesters”.

The pride of a first-time voter

Myat Thu got to know Angel at a taekwondo class. She was an expert in the martial art as well as a dancer at Mandalay’s DA-Star Dance Club, posting videos of her latest moves on Facebook.

She also shared her pride in voting for the first time on November 8 – posting a picture of herself kissing her finger, stained purple to show she had voted.

“My very first vote, from the bottom of my heart,” she posted, with six red hearts. “I did my duty for my country.”

The army seized power to annul that vote, alleging that the sweeping victory of Suu Kyi’s party was down to fraud. Its accusations were rejected by the electoral commission.

On the day of the coup, Angel joked on Facebook that she hadn’t known what was going on when the internet was cut off. 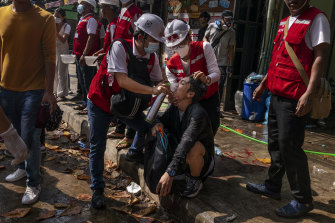 Medics supply oxygen to protesters who were exposed to tear-gas during clashes with the military and police in Yangon on Wednesday.Credit:Getty Images

In the days that followed, she made her stand clear – out on the street waving the red flag of Suu Kyi’s National League for Democracy. In one set of pictures she posed as her father tied a red ribbon to her wrist.

She kept going even as protests grew more dangerous and as the junta deployed combat troops with assault rifles alongside police.

Like Angel, more than a dozen other protesters have been killed by shots to the dead, raising suspicions among rights groups that they were intentionally targeted. Another woman – a bystander – was shot in the head in Mandalay on Sunday.

Angel had known she was risking her life.

One friend, Kyaw Zin Hein, shared a copy of her last message to him on social media. It read: “This might be the last time I say this. Love you so much. Don’t forget”.

On Facebook, she had posted her medical details and the request to donate her body is she were killed. Messages of grief and acclaim flooded the page on Wednesday.

“She was a happy girl, she loved her family and her father loved her so much too,” said Myat Thu, who is now in hiding.

“We are not in a war. There is no reason to use live bullets on people. If they are human, they will not do it.”