ANTI-lockdown protesters have been branded "scum of the earth" as the Netherlands "heads for civil war" on the third day of riots.

Riot cops fired tear gas and water cannons as cars were torched and shops looted by anti-lockdown protesters, who have continued to rampage across the Netherlands. 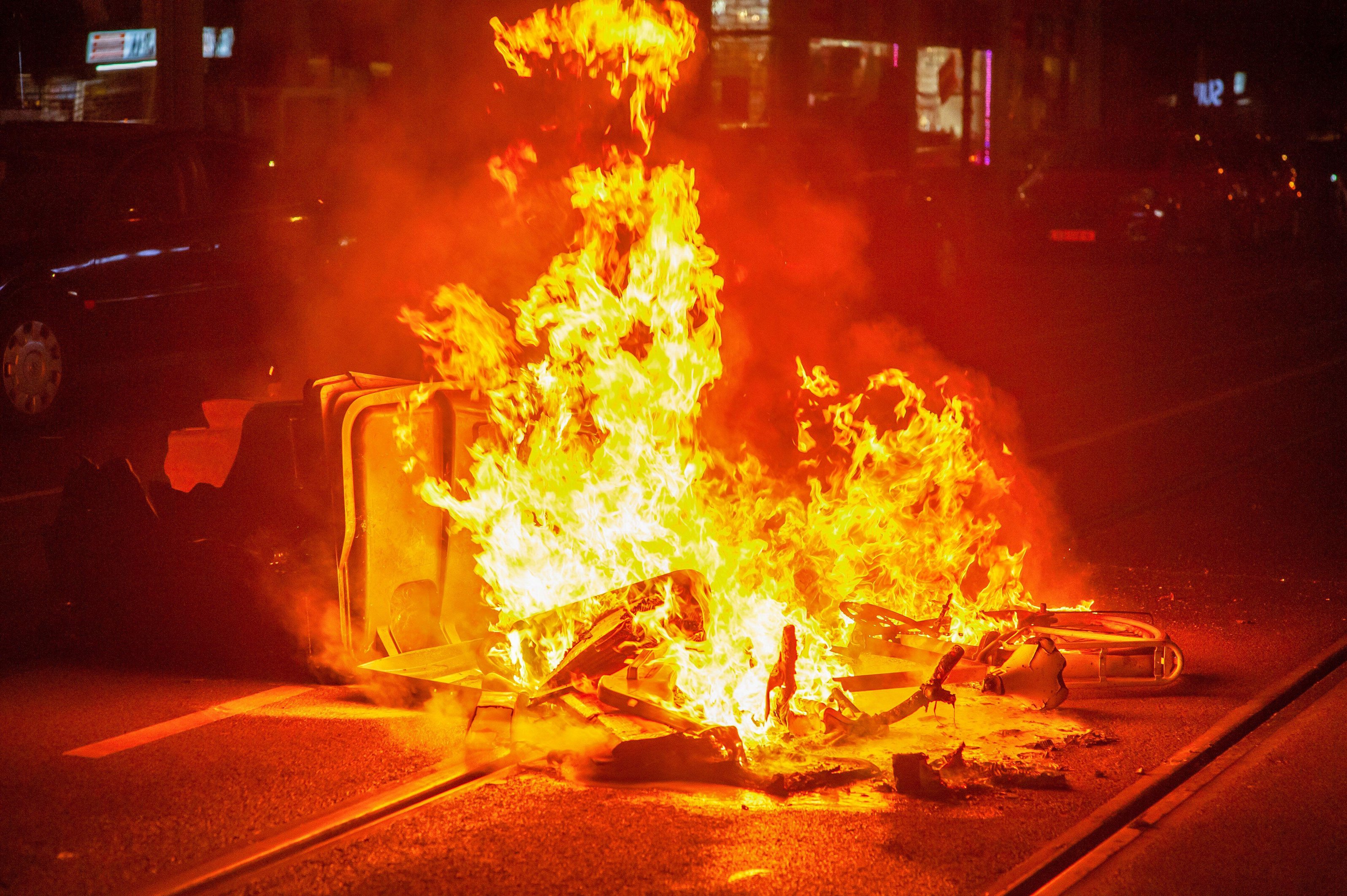 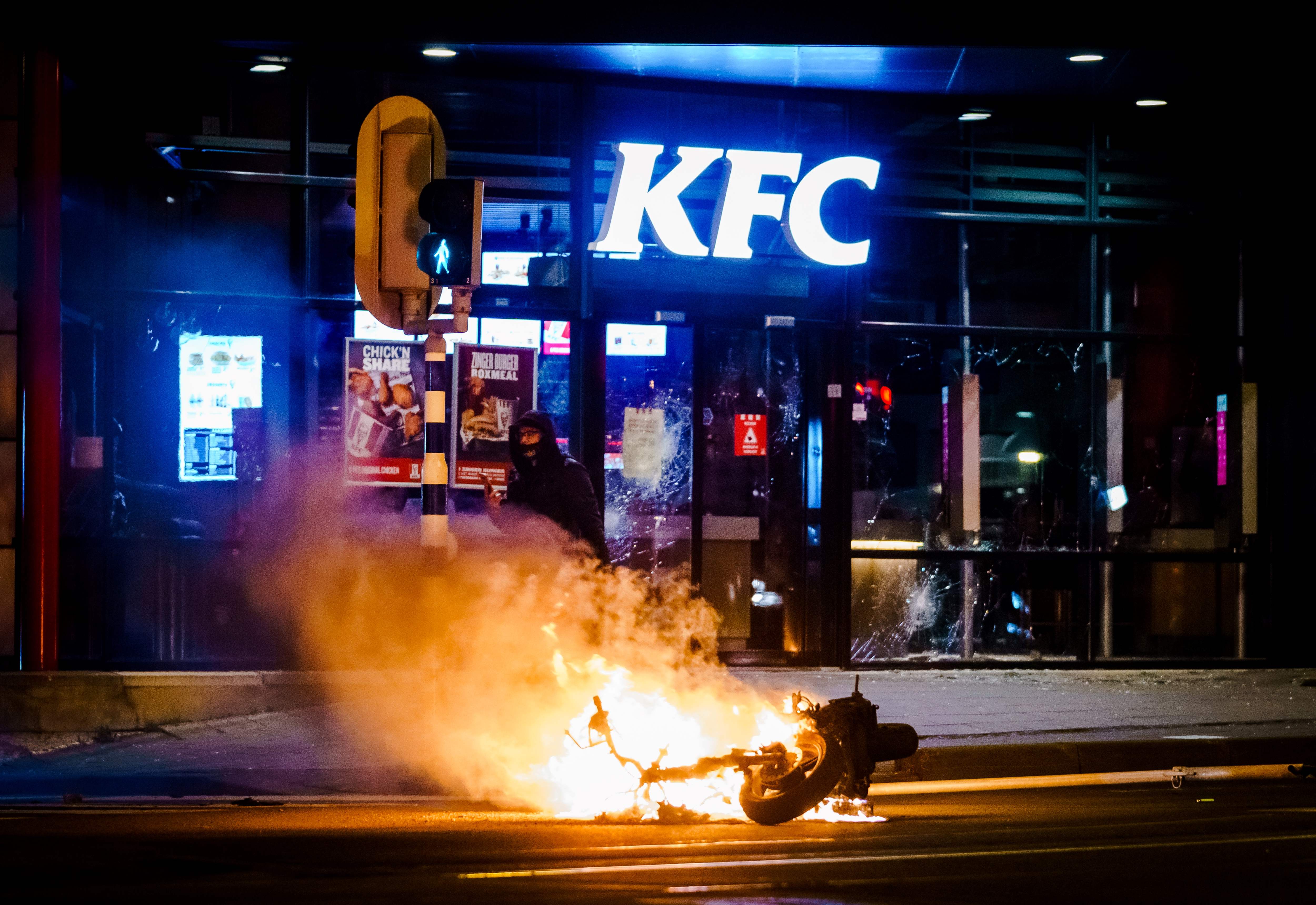 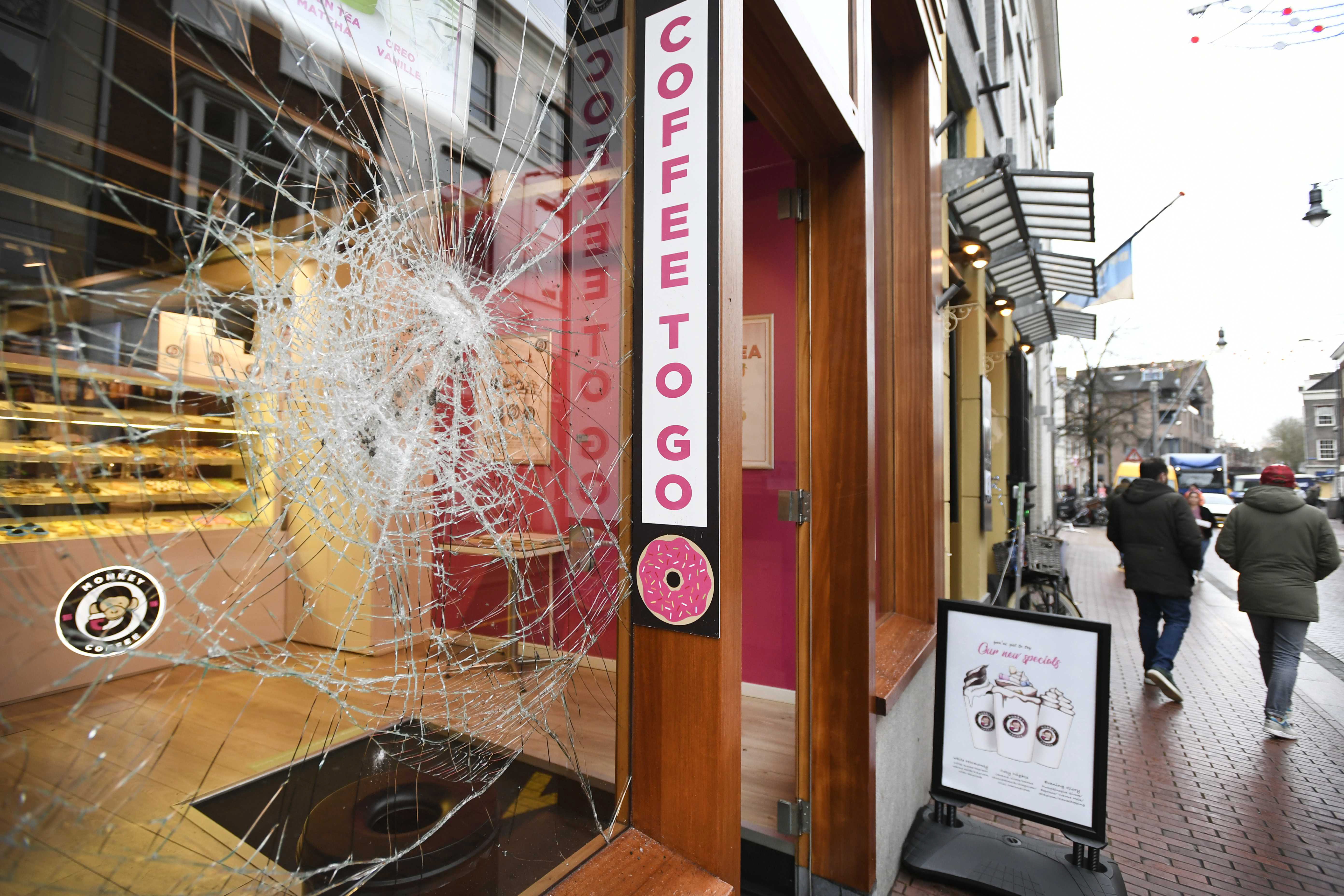 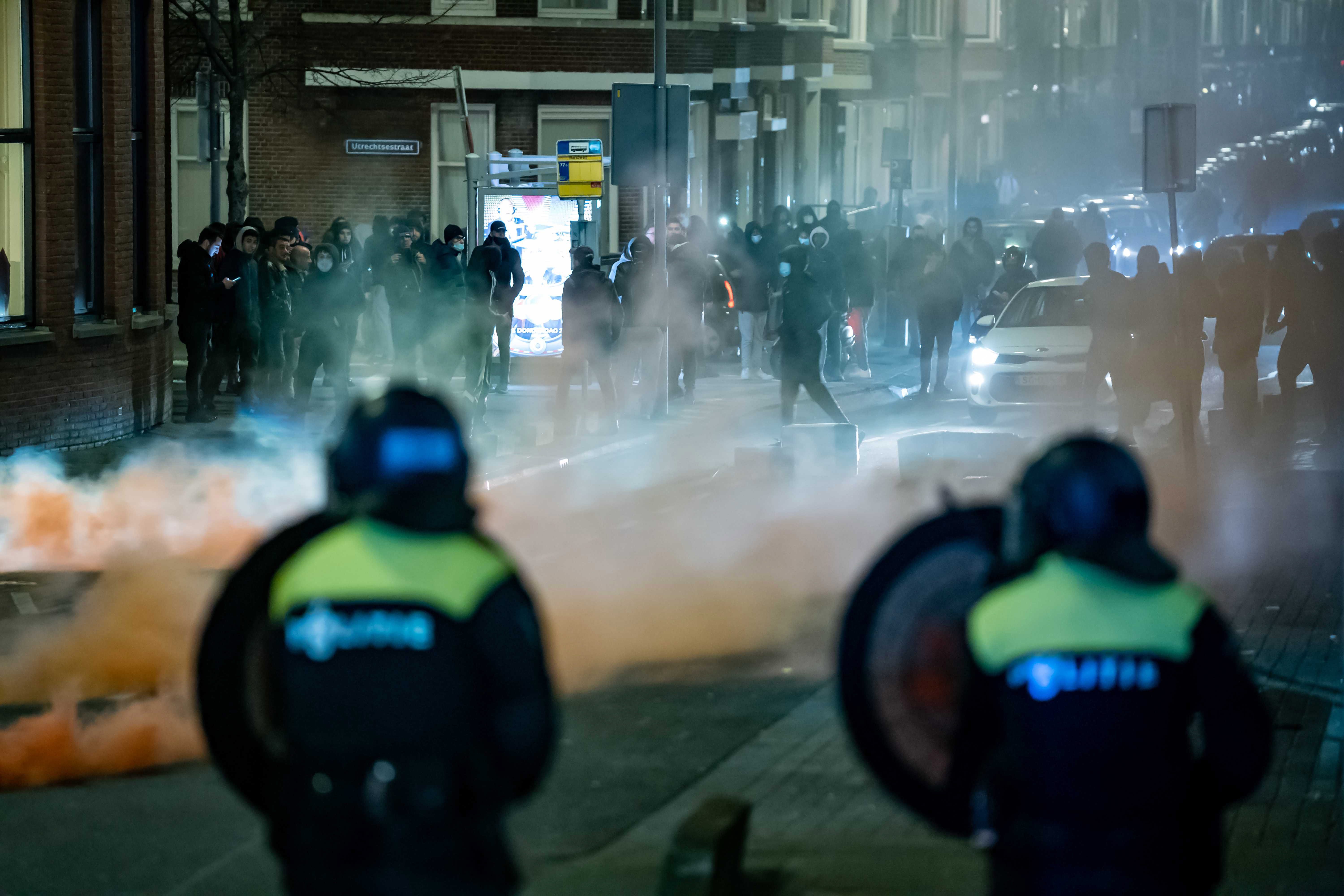 John Jorritsma, the Mayor of Eindhoven, said the outrageous rioting had left the country teetering on the brink of "civil war" as the total number of protesters arrested totalled over 240.

He told reporters during an emotional news conference: "My city is crying, and so am I.

He called the rioters "the scum of the earth" and added "I am afraid that if we continue down this path, we're on our way to civil war."

Hundreds were arrested as police confronted mobs of missile-throwing youths who set vehicles ablaze in Eindhoven and Rotterdam and caused major unrest in the capital Amsterdam.

In Haarlem, vandals sparked a large fire in a street and other towns were rocked by trouble before and after the 9pm to 4.30am coronavirus curfew kicked in.

Yesterday the third night of trouble across the Netherlands initially sparked by protests against the country's no-nonsense coronavirus lockdown measures.

As darkness fell, rioters targeted cops with fireworks as they faced off on streets in towns and cities.

Police in the port city of Rotterdam used a water cannon and tear gas in an attempt to disperse a crowd of rioters who had already looted multiple shops.

More than 240 rioters had been arrested and police had used tear gas in the western city of Haarlem as well as Rotterdam.

Police in Rotterdam said local youths took to the streets seeking a confrontation with police. 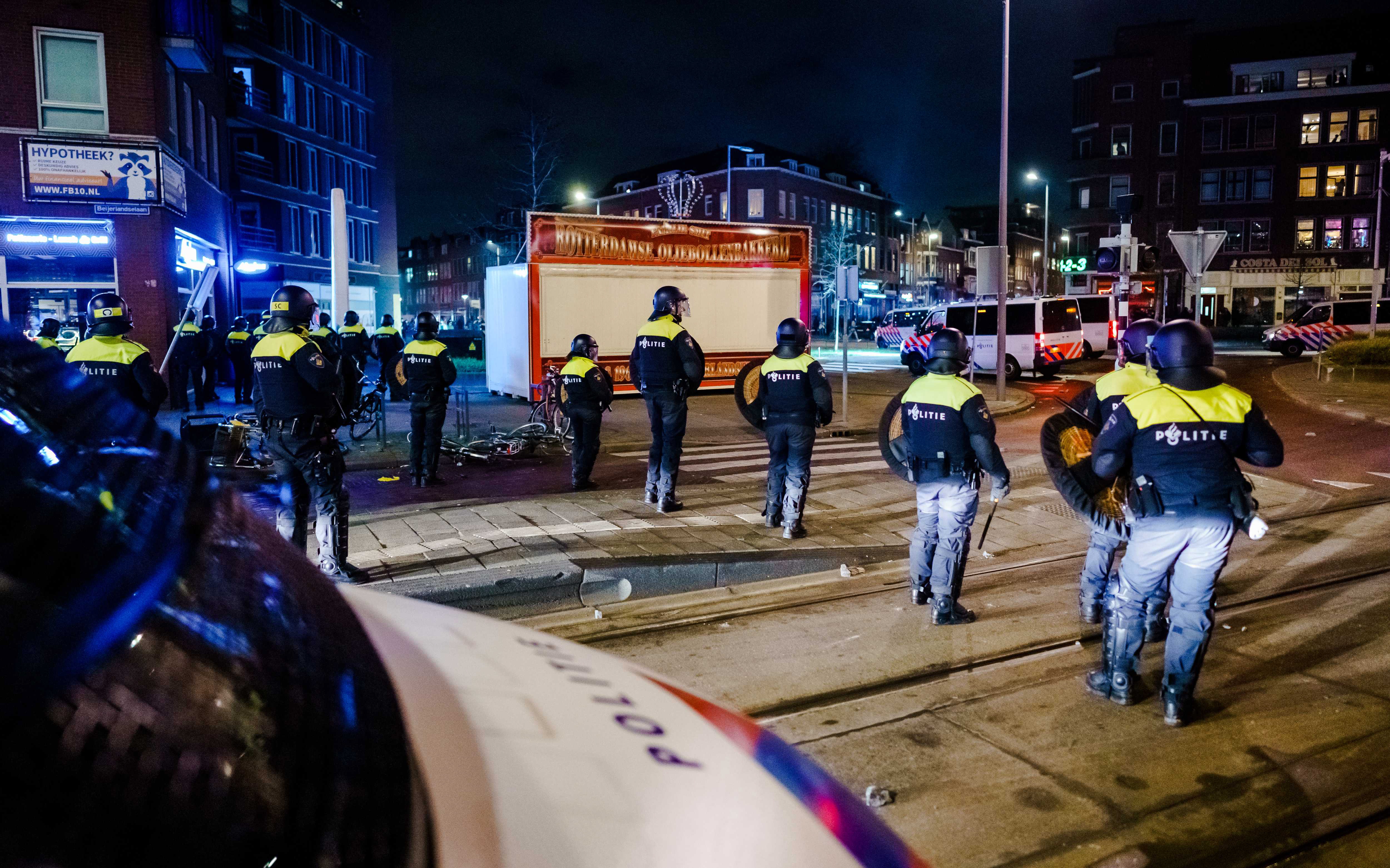 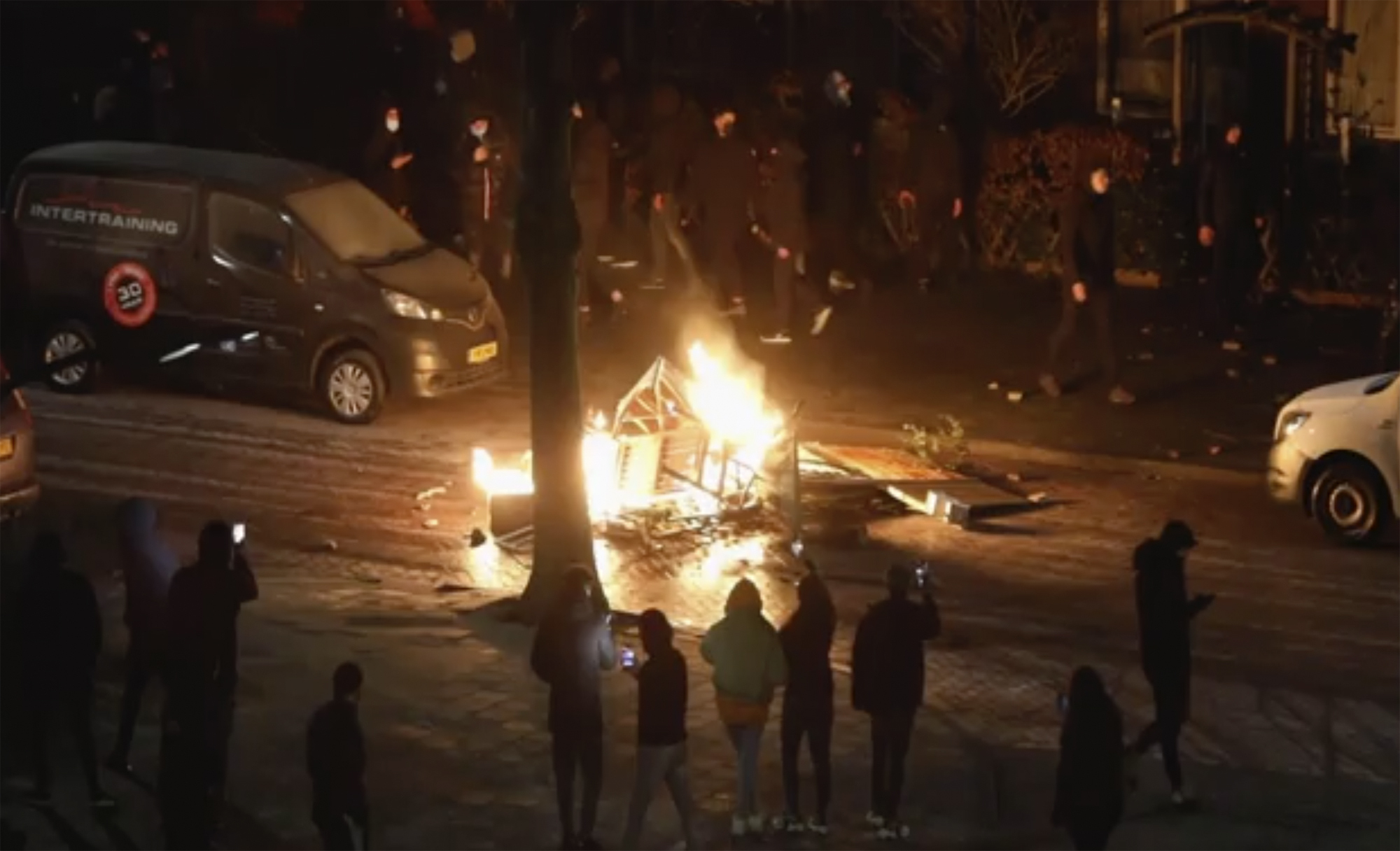 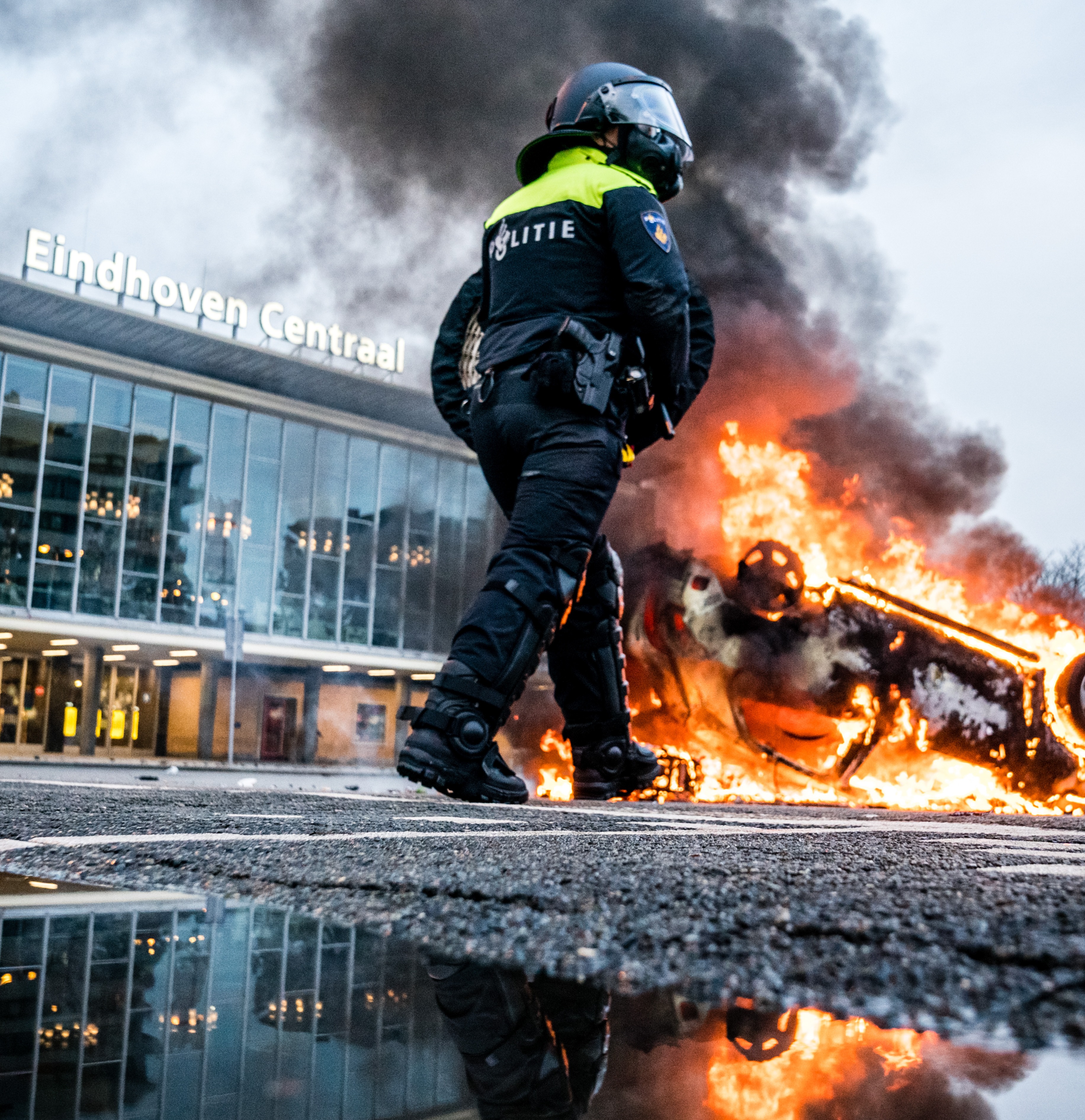 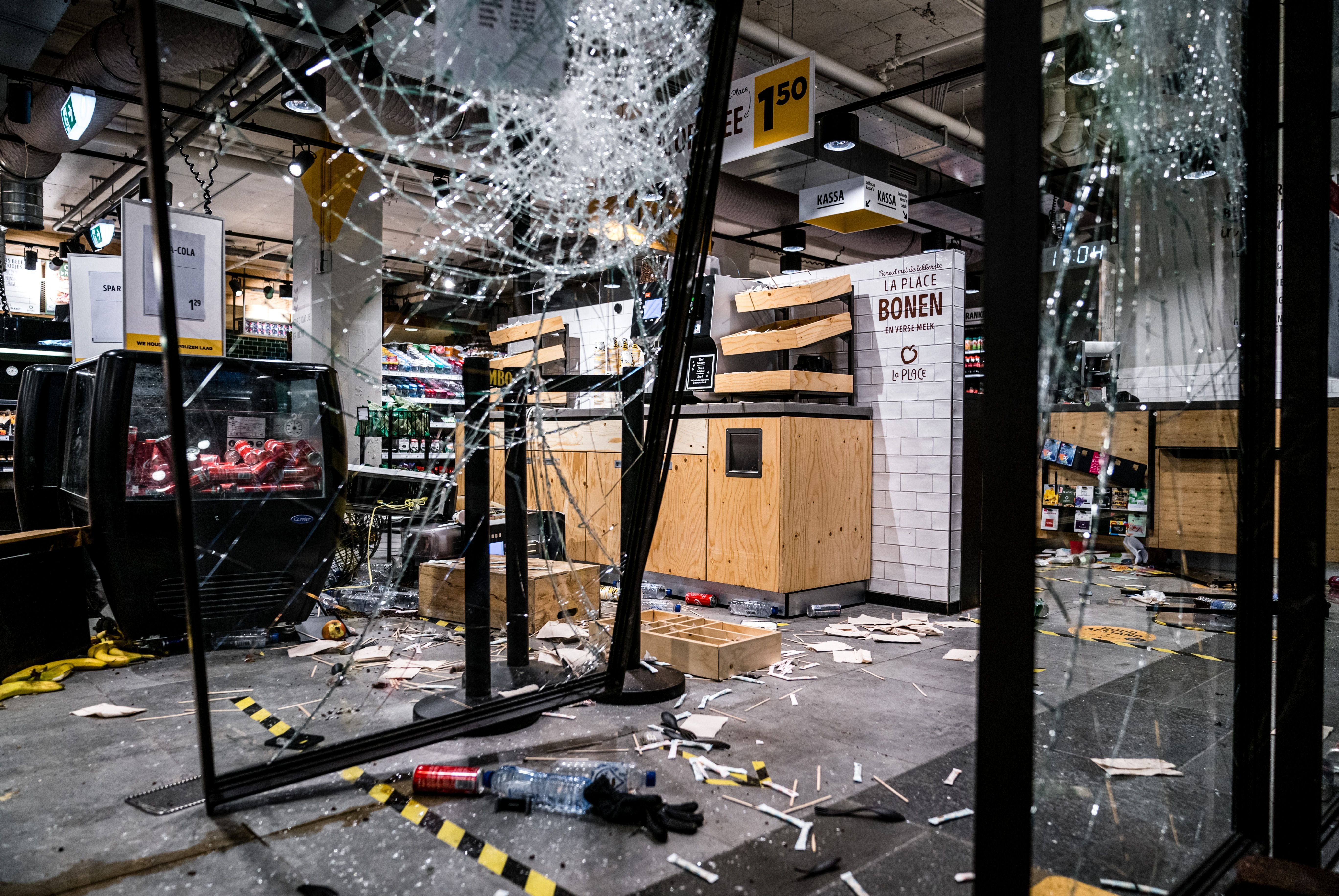 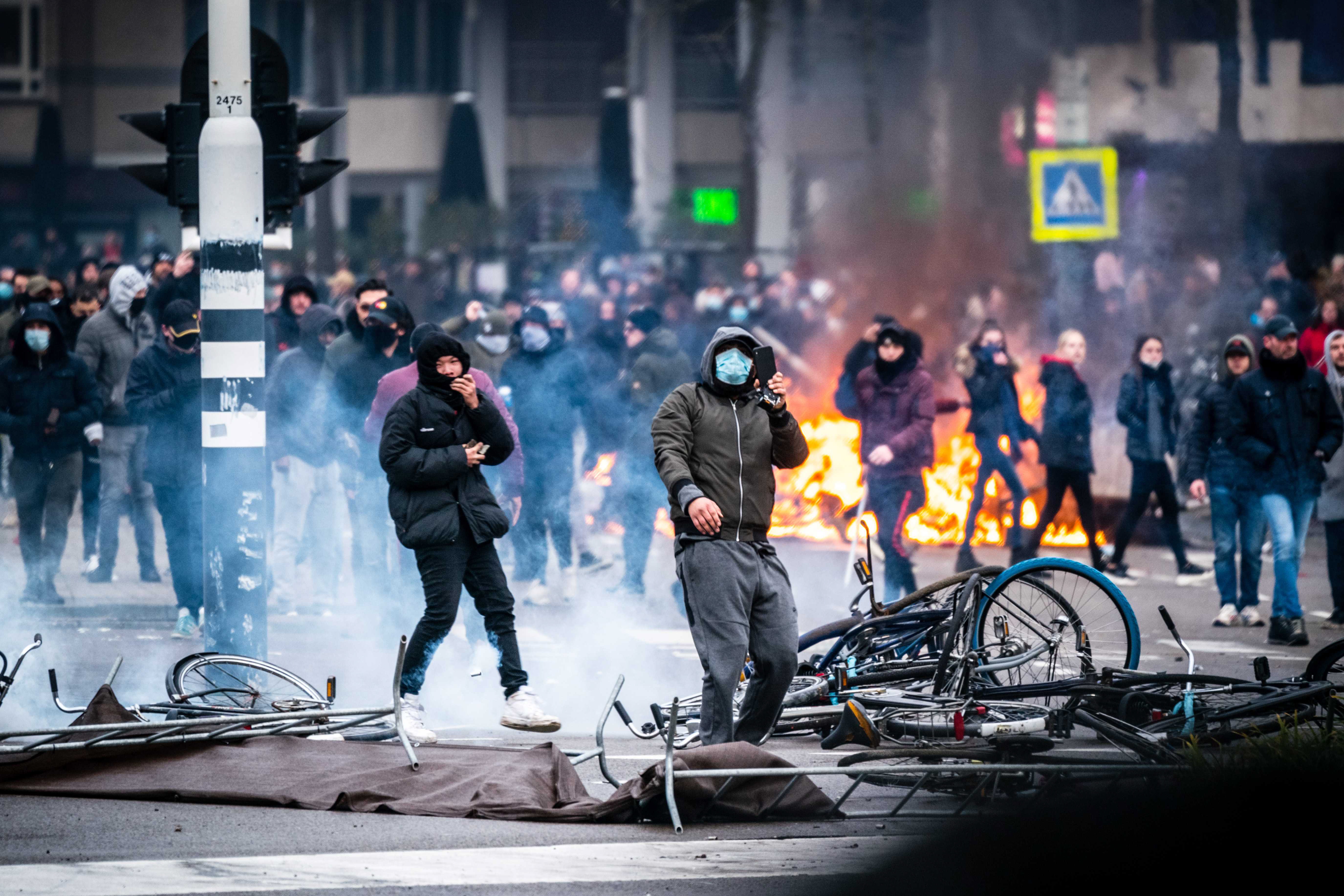 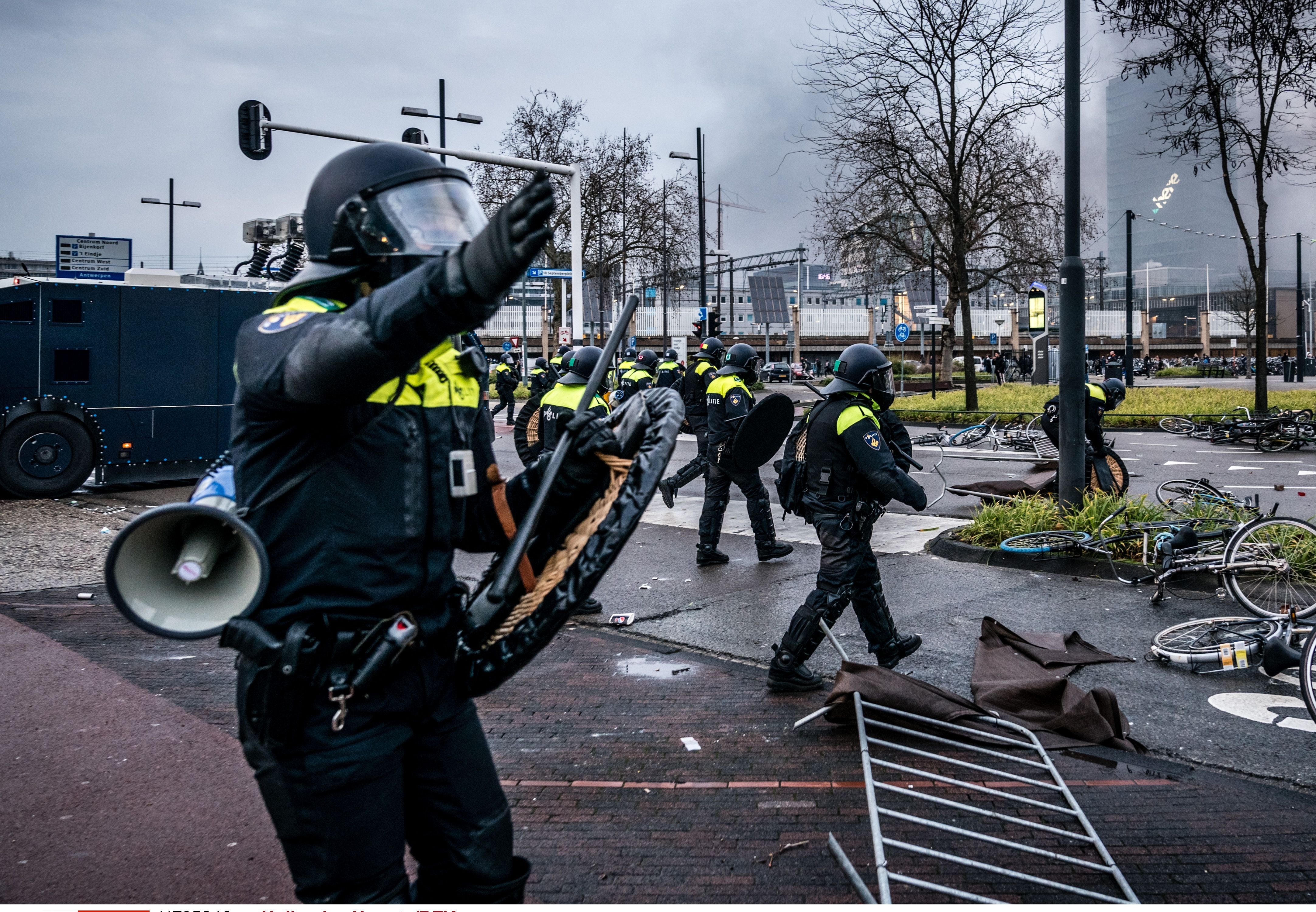 Police in the southern city of Den Bosch said that shops were also looted there and riot police were still trying attempting to restore order.

Prime Minister Mark Rutte said: “It’s unacceptable – this has nothing to do with protesting. It is criminal violence and that’s how we’ll treat it.”

Mr Rutte said the curfew was essential to drive down covid rates and would remain in place despite the mayhem.

By late Monday night, police in Rotterdam were left sweeping up shattered glass littering the streets.

The force tweeted that "calm is slowly returning, but the atmosphere is still grim."

Football fans of Willem II took to the streets of Tilburg to "protect their city" against rioters, local news site Brabants Dagblad reports.

In the southern town of Geleen, police tweeted that youths in the downtown area were throwing fireworks at their officers.

Riot police were later seen charging at protesters in The Hague.

Dutch media reported calls on social media for further violence even as the country struggles to contain new coronavirus infections, hospitalisations and deaths.

Police in the southern town of Goes and the North Holland province said they detained people on suspicion of using social media to call for more trouble.

Worst hit was the southern city of Eindhoven, where police clashed with hundreds of rioters who torched a car, threw rocks and fireworks at officers, smashed windows and looted a supermarket at its railway station. 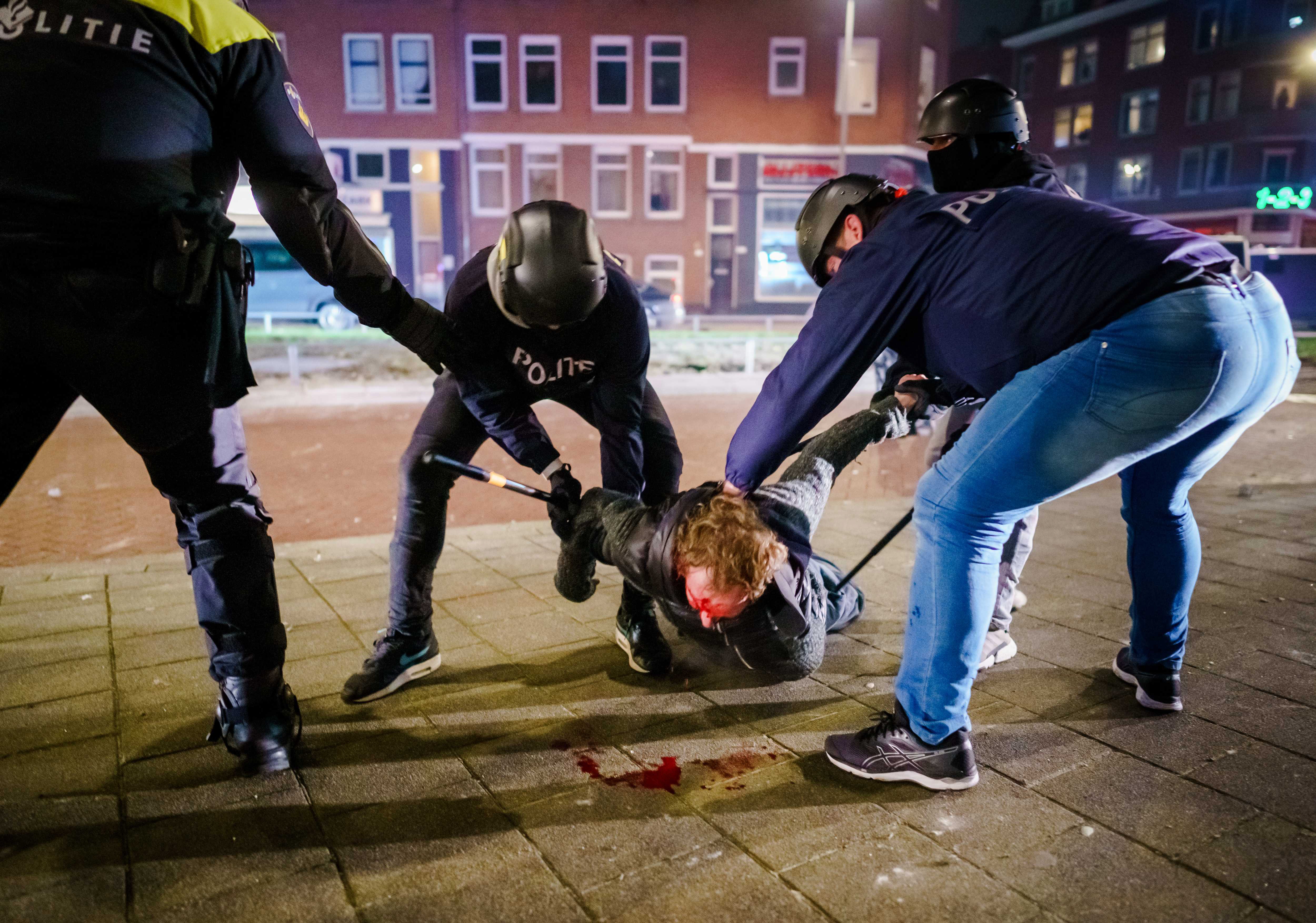 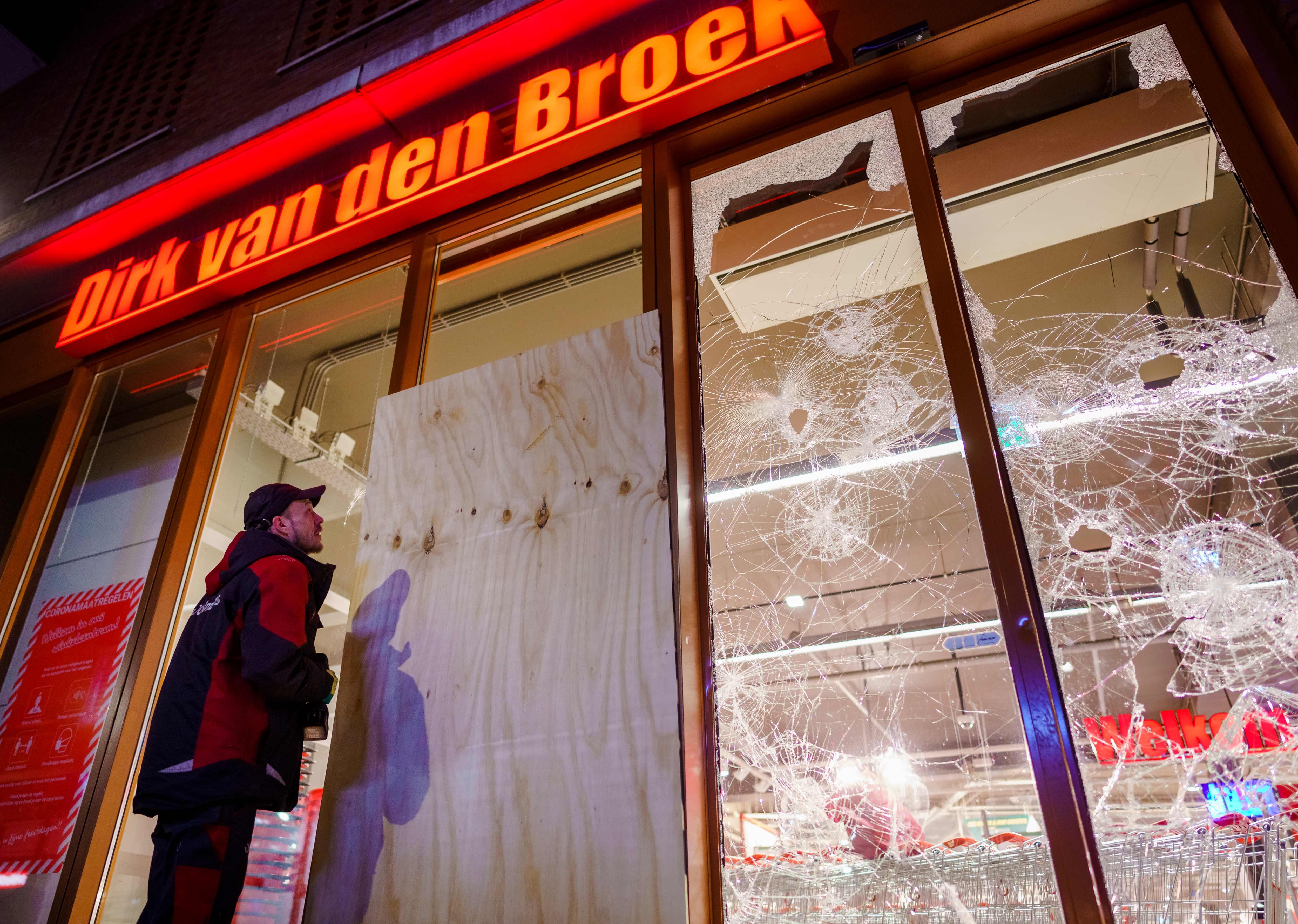 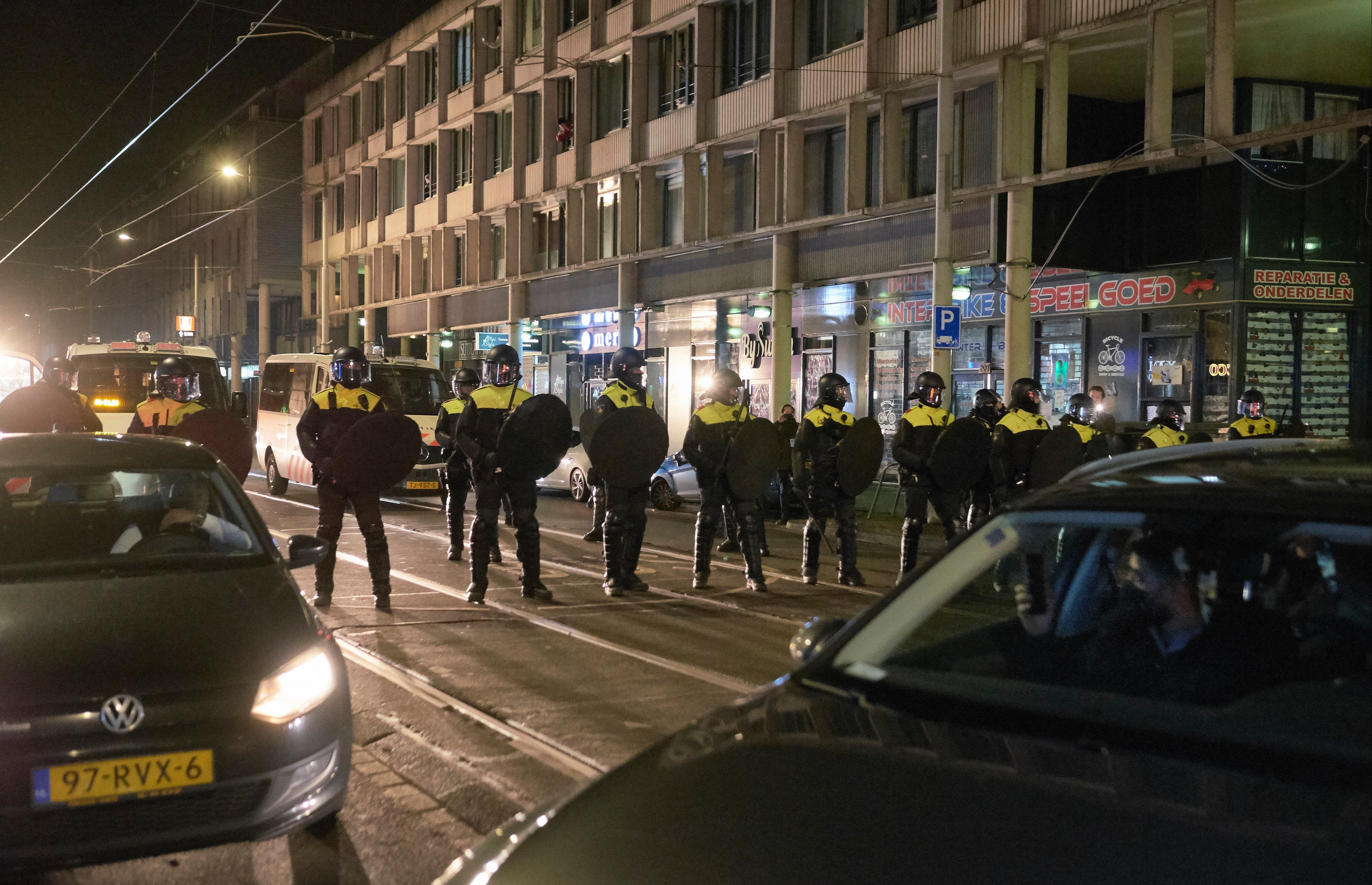 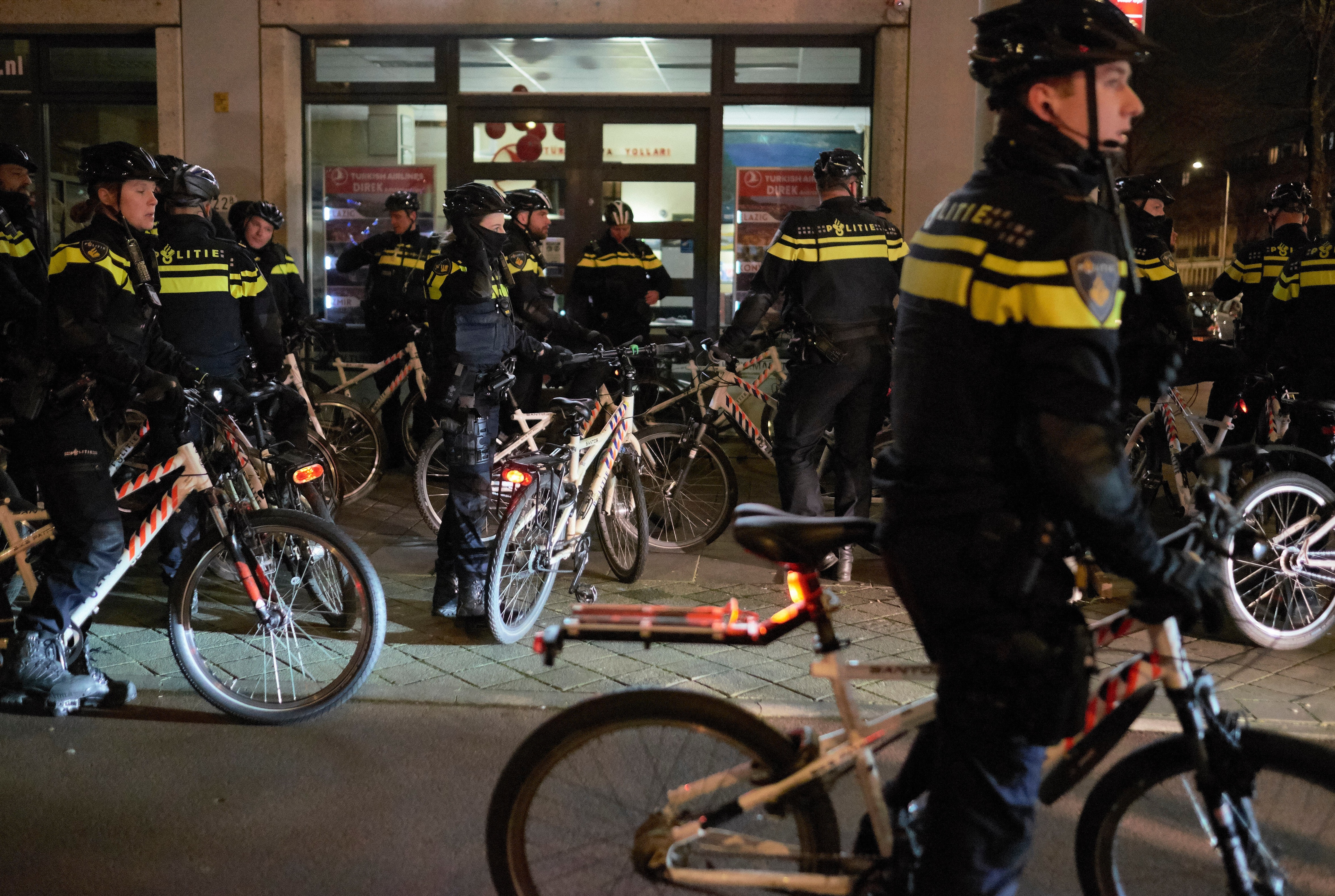 The rioting coincided with the first weekend of a new national coronavirus curfew, but local leaders stressed that the violence wasn't the work of citizens concerned about their civil liberties.

"These demonstrations are being hijacked by people who only want one thing and that is to riot," said Hubert Bruls, mayor of the city of Nijmegen. Op1.

Nijmegen was one of a number of towns and cities that issued emergency decrees giving police extra powers to keep people away from certain locations amid reports of possible riots there.

On Sunday, rioters threw rocks at the windows of a hospital in the eastern city of Enschede.

And on Saturday night, youths in the fishing village of Urk torched a coronavirus testing facility.

Police in the southern province of Limburg said military police were sent as reinforcements to two cities.

The Netherlands has seen over 13,600 confirmed virus deaths in the pandemic.

The government has introduced its toughest measures since the start of the pandemic – including the first night-time curfew since World War Two. Anyone caught violating it faces a £84 fine.

The country's bars and restaurants have been shut since October, while schools and non-essential shops closed last month. 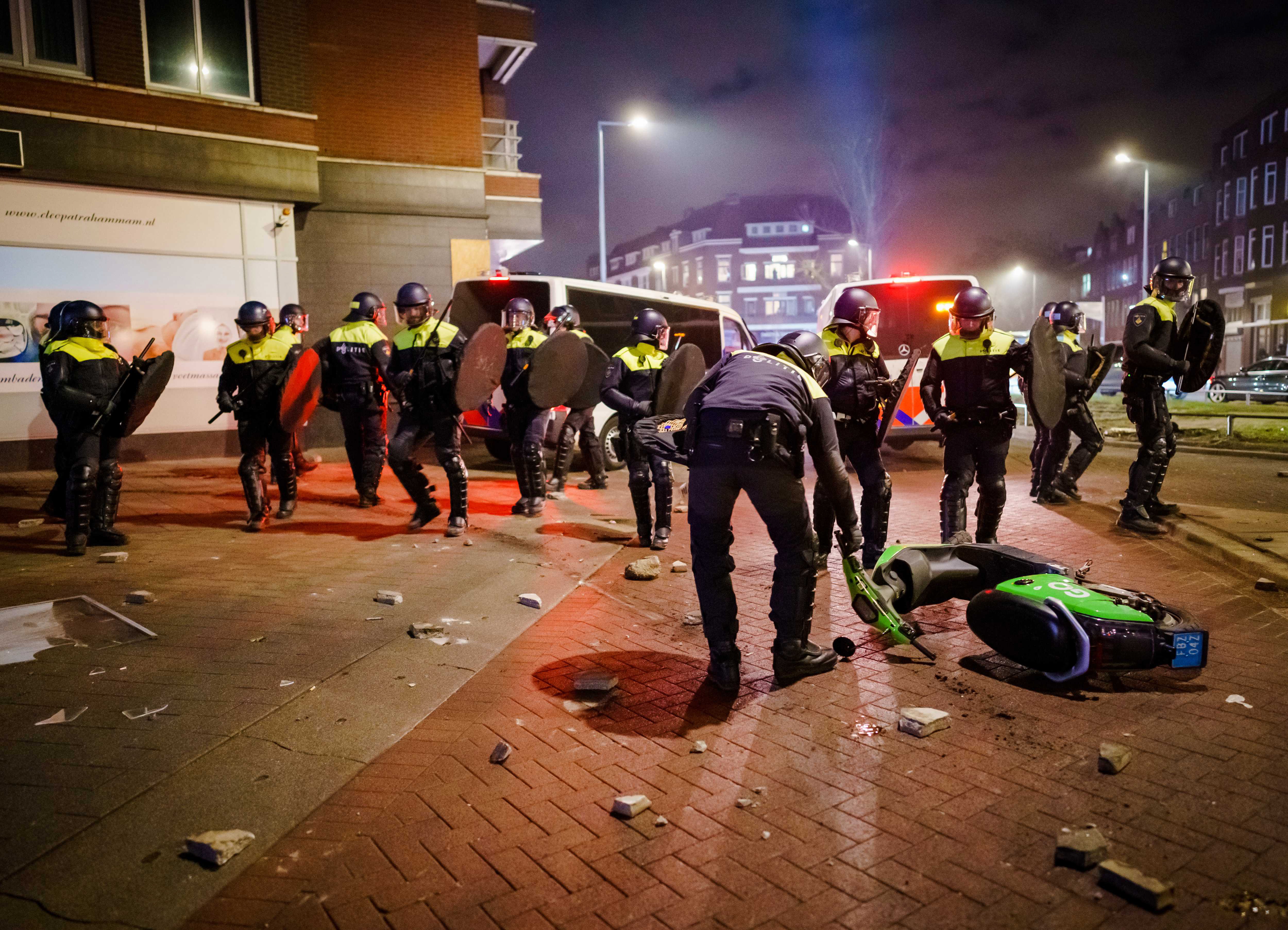