Tory leadership election is OVER! Ballot closes after party members cast their votes to choose between Liz Truss and Rishi Sunak as new PM with rivals now facing anxious wait until Monday lunchtime for result

The Tory leadership ballot closed this afternoon with rivals Liz Truss and Rishi Sunak now facing an anxious wait until Monday lunchtime to discover who will become the new Prime Minister.

Today’s 5pm deadline brought to an end the eight-week contest to replace Boris Johnson in Downing Street, after the outgoing PM announced his resignation following a revolt by Tory MPs.

Around 160,000 Tory members were given a vote in the final stage of the leadership contest – between Ms Truss and Mr Sunak – with the two candidates having spent the past few weeks touring the UK in an attempt to win the backing of the party’s grassroots.

The result of the leadership contest will be announced by Sir Graham Brady, the chair of the Conservatives’ 1922 Committee, at an event in London at 12.30pm on Monday.

Ms Truss is widely predicted to be crowned the new Tory leader with the Foreign Secretary expected to use this weekend to continue her preparations for entering Number 10.

As the ballot closed today, Ms Truss expressed her belief in a ‘brighter and better future for Britain’.

‘I have a bold plan that will grow our economy and deliver higher wages, more security for families and world-class public services,’ she added.

‘I’ll do this by cutting taxes, pushing through supply-side reform and slashing red tape that is holding businesses back.

‘If I am elected Prime Minister, I will never let anyone talk us down and I will do everything in my power to make sure our great nation succeeds.’

Ahead of the ballot closing, allies of ex-Chancellor Mr Sunak, were today insisting the race was still ‘neck and neck’ and the result not ‘cut and dried’.

Mr Sunak himself said he had been ‘humbled’ to meet thousands of Tory members this summer.

‘This is a critical election for our country and for the future of the Conservative Party, as we eye a historic fifth term in government,’ he said in a statement.

‘We face huge challenges ahead, but also huge opportunities. I know what it takes to get through challenging times. I did it as Chancellor and I will do it again as Prime Minister.’

Earlier today, removal vans were spotted in Downing Street as the Johnsons’ final belongings are taken away from their official flat above Number 11. 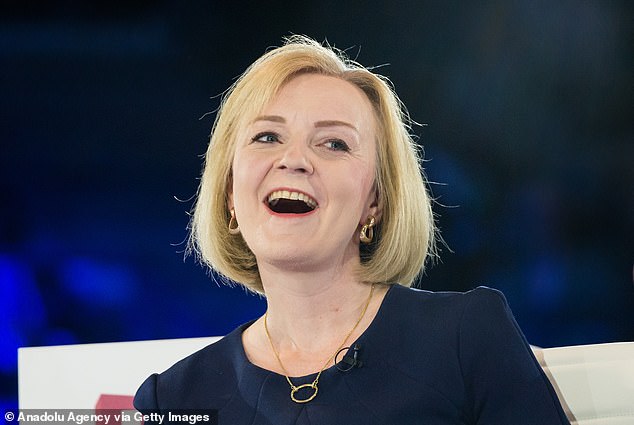 Liz Truss, the Foreign Secretary, is widely predicted to be crowned the new Tory leader when the result of the contest is announced on Monday lunchtime 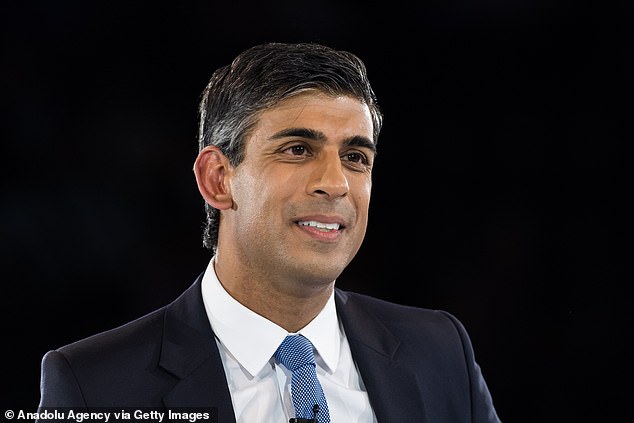 But an ally of Rishi Sunak, the former chancellor, this morning insisted the race was still ‘neck and neck’ and the result not ‘cut and dried’ 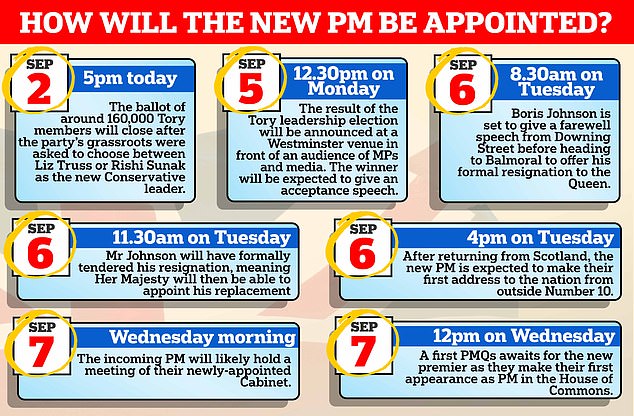 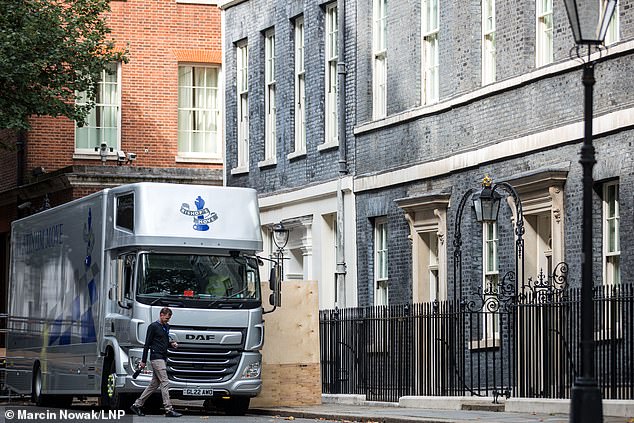 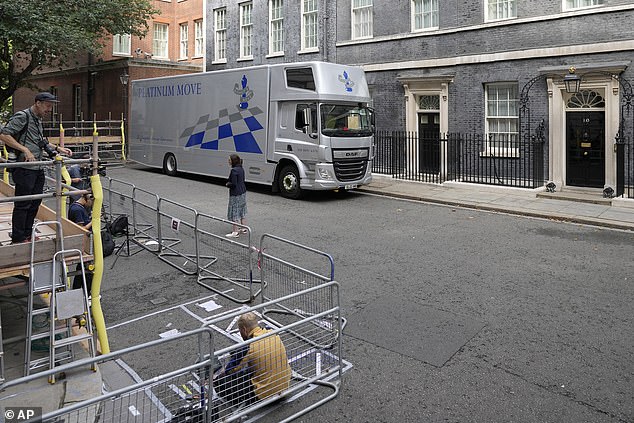 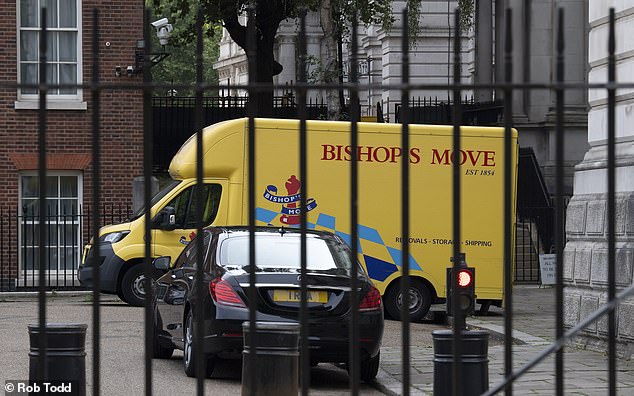 The Johnsons’ reportedly spent more than £200,000 on a controversial refurbishment of the Downign Street residence 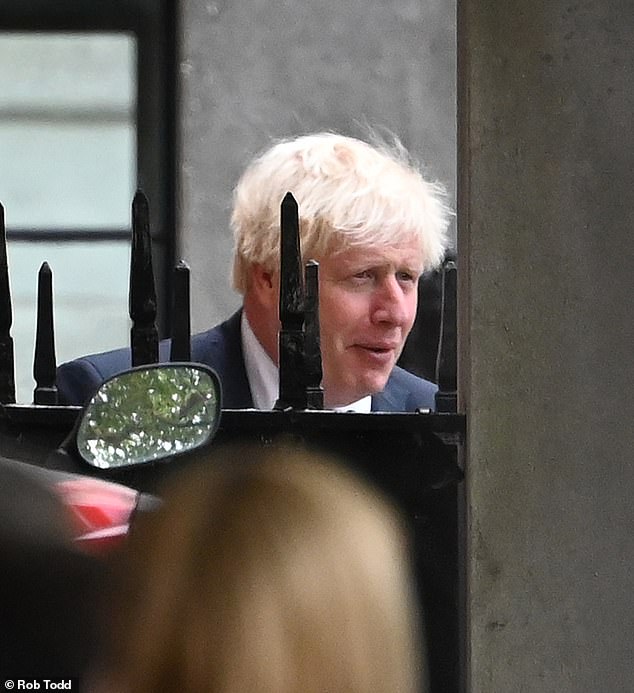 Boris Johnson, pictured leaving the rear door of Number 10 today, will formally tender his resignation with the Queen at Balmoral on Tuesday 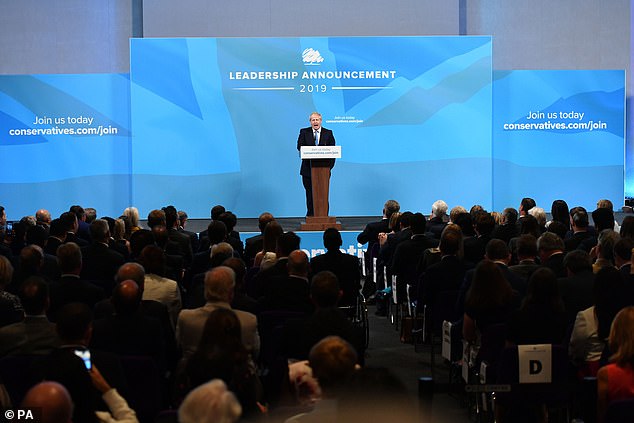 How will the new PM be appointed?

5pm today: The ballot of Tory members closed. Around 160,000 of the party’s grassroots had the chance to decide between Liz Truss or Rishi Sunak as the new PM.

12.30pm on Monday: The result of the Tory leadership election is set to be announced at a central London venue on the first day MPs return to Westminster after their summer break. Sir Graham Brady, the chair of the 1922 Committee, is likely to make the announcement in front of an audience of Tory MPs and media. The winner will then be expected to give an acceptance speech. For the 2019 leadership election, the result was announced at the Queen Elizabeth II conference centre, which sits across the road from the Houses of Parliament.

8.30am on Tuesday: Boris Johnson is expected to give a farewell speech from Downing Street before heading to Balmoral in Scotland to offer his formal resignation to the Queen. He will fly on the smaller of the Government’s official planes, while his successor will make their own way to Scotland.

Around 11.30am on Tuesday: Mr Johnson will have formally tendered his resignation, meaning Her Majesty will then be able to appoint his replacement. The new PM will travel down to London on the Government plane – perhaps while conducting their first official business – while Mr Johnson will make his own onward travel arrangements.

4pm on Tuesday: The new PM is expected to make their first address to the nation from outside the door of Number 10.

Wednesday morning: The incoming PM will likely hold a meeting of their newly-appointed Cabinet.

12pm on Wednesday: A first Prime Minster’s Questions awaits for the new premier as they make their first appearance as PM in the House of Commons.

Conservative chairman Andrew Stephenson said the hustings programme had ‘shown the strength of our party across the UK’.

“I’d like to thank Rishi Sunak and Liz Truss for participating in what, at times, must have been a gruelling schedule in good spirits and giving our members the opportunity to question them up front and personal, answering over 600 questions and putting themselves under the spotlight,’ he added.

‘Whatever the result come Monday, I know our Party is ready to unite around a new Leader and tackle the challenges we face as a country ahead.’

A win for Mr Sunak would shock Westminster and the wider country after polls have consistently put Ms Truss ahead of her rival in the leadership battle.

Whoever is the announced the victor on Monday will have a whirlwind 48 hours at the beginning of this week as they start their premiership.

They will first have to travel to Balmoral in Scotland on Tuesday to be formally appointed as PM by the Queen.

Traditionally during Her Majesty’s 70-year reign, the Queen has appointed new premiers at Buckingham Palace.

But Royal aides have decided to spare the monarch the journey to London next week in case she is suffering from mobility issues on the day.

The new PM is then expected to make their first address to the nation from outside the door of Number 10 on late Tuesday afternoon – following their return from their audience with the Queen.

They will then likely begin appointing top ministers to their new Government prior to holding their first Cabinet meeting on Wednesday morning.

It is widely assumed, should Ms Truss become the next PM, that Kwasi Kwarteng will become her new Chancellor.

A first Prime Minister’s Questions will then await the incoming premier at noon on Wednesday, when they will first do battle with Labour’s Sir Keir Starmer.

The new PM – who will face immediate decisions over how to give extra support to families during the cost-of-living crisis, how to prepare the NHS for winter, and how to continue British support for Ukraine – will have fewer than 1,000 days before they need to call a general election.

The new Tory leader will also face a challenge to reunite their party after this summer’s bruising leadership contest, which has been marked by a series of ‘blue on blue’ attacks.

This weekend, the Foreign Secretary is likely to be holding final discussions with her team about key appointments, what she will say in her first words as PM, and how she will respond to the immediate challenge of soaring energy bills.

But, despite the widespread expectation that Ms Truss will be travelling to see the Queen on Tuesday, those in Mr Sunak’s camp were today still holding out hope of a shock result.

Kevin Hollinrake, a supporter of the former chancellor and MP for Thirsk and Malton, insisted Mr Sunak had been proving popular with Tory members during the leadership campaign.

He told Sky News: ‘I’ve seen some of the polls and national polls. I think it’s quite hard for pollsters to determine who is a Conservative member and who is not because there’s not an open database.

‘And I’ve seen similar kind of polls around different constituencies around the country. So I don’t think he’s cut and dried. I think he’s probably neck and neck.’

A Conservative pollster suggested Ms Truss was on course for a ‘clear victory’ but by a tighter margin than previously expected.

Lord Hayward, a former MP and current Tory peer, said: ‘My overall sense is Liz Truss will win but I am not convinced it will be by the margin that the polls are predicting.

‘It will be clear, she will have a clear victory, but I would be surprised if it’s by the margin the polls are predicting.’

Ms Truss this week suggested she would not change the decor in the Downing Street flat if she becomes PM.

The Foreign Secretary said she believed in ‘value for money’ when quizzed on whether she would keep the Johnsons’ decor following their controversial £200,000 refurbishment of the residence.

She told a hustings event in London: ‘All I can tell you is, first of all, I am from Yorkshire, so I do believe in value for money and not buying new things if you have already got things that are perfectly good to use.

‘Secondly, I think with the in-tray of issues that you have outlined earlier, I don’t think I am going to have time to think about the wallpaper or flooring.’