At least 120 people killed by floods in capital of Congo

At least 120 people are confirmed dead in the Democratic Republic of Congo capital Kinshasa after heavy rains unleashed floods and caused landslides.

Prime Minister Jean-Michel Sama Lukonde said officials were still searching for more bodies, while Health minister Jean-Jacques Mbungani Mbanda told Reuters the ministry had counted 141 dead but that the number needed to be cross-checked with other departments.

‘We came to assess the damage and the primary damage we see is human,’ Lukonde said on state television Tuesday.

Some 12 million people live in the 24 neighbourhoods of Kinshasa hit by the floods, according to three local officials who told The Associated Press that people were killed, houses submerged and roads ruined. 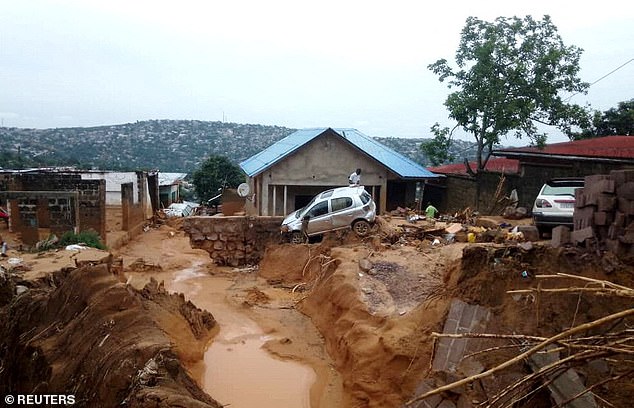 A car is seen after heavy rains caused floods and landslides, on the outskirts of Kinshasa, Democratic Republic of Congo December 13, 2022 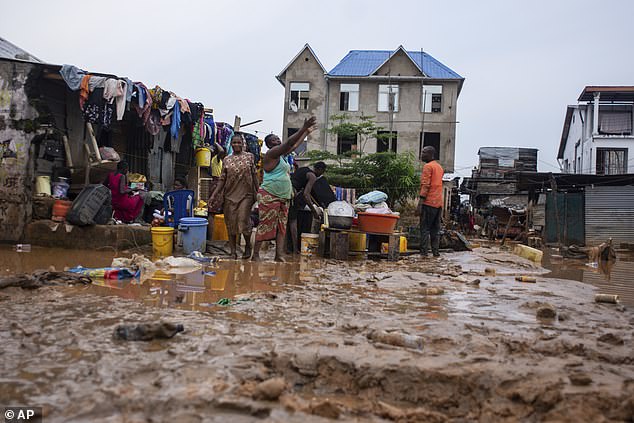 In the Ngaliema area more than three dozen people died and bodies are still being counted, said the area’s mayor, Alid’or Tshibanda.

In another part of town five members from one family were killed, some by electrocution.

‘It is a just calamity,’ said Pierrot Mantuela. The 30-year-old lost his mother, nine-year-old daughter and three brothers.

‘It’s sad to lose all the members of my family,’ he said.

He was spared because he was working Monday night when the rains began, he said. 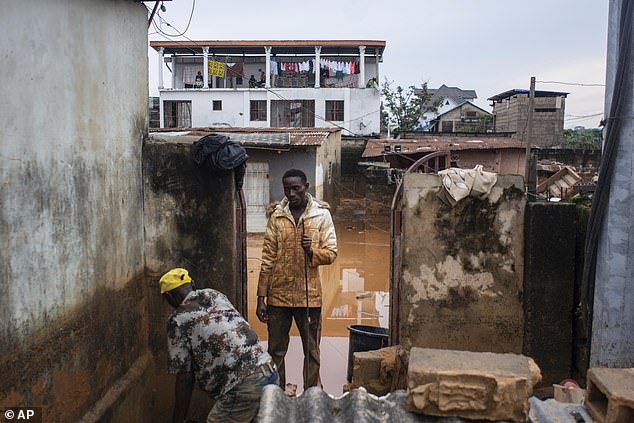 Entire neighbourhoods were flooded with muddy water, and houses and roads ripped apart by sinkholes, including the Nation Road 1 highway that connects Kinshasa to the chief sea port of Matadi.

The prime minister’s office said in a statement that the N1 could be closed for 3-4 days.

‘On the National Road 1 there is a big hole. Only pedestrians can pass. We do not understand how the water cut the road,’ said local resident Gabriel Mbikolo.

An AFP reporter saw the bodies of nine members of the same family – including young children – who had died after the collapse of their home in the Binza Delvaux district. 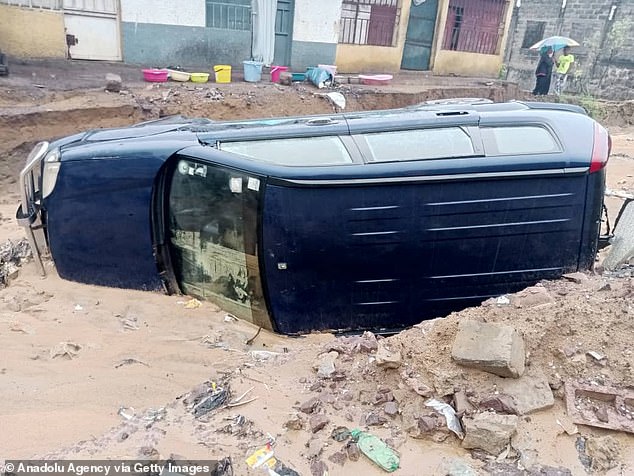 A damaged car is seen stuck after heavy rain cause flood in Kinsasha, Democratic Republic of the Congo on December 13, 2022 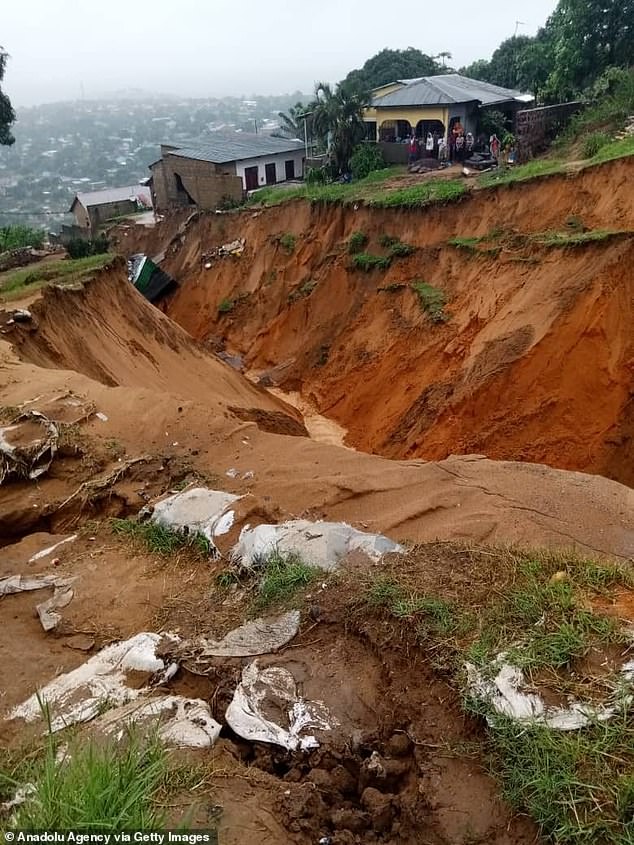 A view of the collapsed road due to the landslide after heavy rain cause flood in Kinsasha, Democratic Republic of the Congo on December 13, 2022. After two days of heavy rains, floods and landslides occurred, and at least 120 people lost their lives

‘We drained the water out, and thinking that there was no more danger we went back indoors to sleep – we were soaked,’ he said.

The family went back to bed and ‘just afterwards the wall collapsed’.

‘We’ve never seen a flood here on this scale,’ said Blanchard Mvubu, who lives in the Mont-Ngafula neighbourhood of CPA Mushie.

‘I was asleep and I could feel water in the house… it’s a disaster – we’ve lost all our possessions in the house, nothing could be saved.’

He added: ‘People are building big houses and that blocks up the drains. The water can’t move freely and that’s what causes the floods.’ 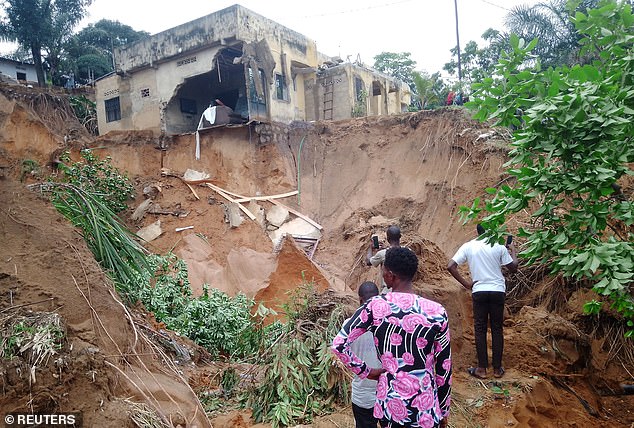 People stand watch after heavy rains caused floods and landslides, on the outskirts of Kinshasa, Democratic Republic of Congo December 13, 2022 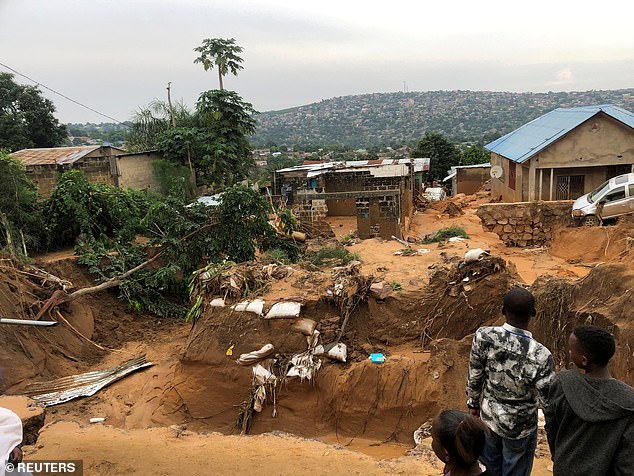 Another man, who gave his name as Freddy, said everything in his home was under water – ‘shoes, food stocks, clothes. Everything is lost, there’s nothing to be saved.’

Officials said much of the destruction happened in houses built on plots without official permission.

‘They have no documents. They are chased away but they always come back,’ said Dieumerci Mayibazilwanga, the mayor of Mont-Ngafula, of people building unauthorised houses.

Once a fishing village on the banks of the Congo river, Kinshasa has grown into one of Africa’s largest megacities with a population of more than 12 million.

Poorly regulated rapid urbanisation has made the city increasingly vulnerable to flash floods after intense rains.

At least 39 people died in Kinshasa in 2019 when torrential rain flooded low-lying districts and some buildings and roads collapsed.