Singapore: In a closed courtroom in Myanmar’s purpose-built 21st century capital Naypyitaw next week, Australian Sean Turnell is expected to face a judge for the first time since being arrested in the days after a coup in the country more than four months ago.

There has been no official announcement of the court date or charges against the economist and former adviser to overthrown civilian leader Aung San Suu Kyi. 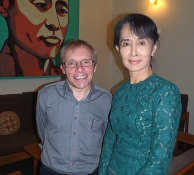 “I don’t know about this matter,” was all an official from Myanmar’s Ministry of Information would say on Friday before hanging up on The Sydney Morning Herald and The Age.

The only reason Turnell’s impending court appearance next Wednesday has been made public is because it was flagged this month by the lawyer for Suu Kyi, whose own trial has started this week in Naypyitaw behind closed doors.

As junta-controlled Myanmar has returned to its dark past, even information about Turnell’s whereabouts since he was detained on February 6 has been hard to come by.

It was left to former inmates including fellow Australian Ross Dunkley to reveal the academic had been jailed inside Insein Prison in Yangon. This week, Ko Bo Kyi, a friend of Turnell and former political convict who runs the Assistance Association for Political Prisoners (AAPP) from hiding, told the Herald and The Age he had heard Turnell had now been transferred to Naypyitaw, an hour’s flight north or five-hour drive from the main city and former capital. 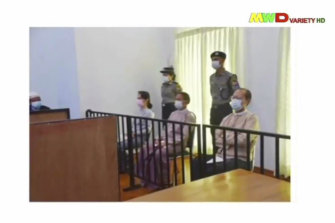 An image of Aung San Suu Kyi, left, in court in Naypyitaw last month was shown on military-run television.Credit:Myawaddy TV via AP

Suu Kyi’s lawyer, Khin Maung Zaw, has said Turnell and four other prominent political detainees from her former National League for Democracy government have been listed as representing themselves in court, suggesting they have been denied legal counsel.

The Australian, Khin Maung Zaw says, has been charged under the century-old Burma Official Secrets Act, whose various sections include penalties of between three and 14 years in prison.

Australia issued its latest call for Turnell’s immediate release during a conversation on Wednesday between Vice Admiral David Johnston, the Vice Chief of the Australian Defence Force, and Deputy Commander-in Chief of the Myanmar military Vice Senior General Soe Win.

It was the second time Johnston had phoned his counterpart since the coup and a Department of Defence statement said he had “underlined the very high priority that Australia attaches to Professor Turnell’s release and made a range of requests regarding his circumstances”.

“For Sean Turnell and for other political detainees, the chances of a fair trial are close to zero,” said Nicholas Coppel, Australia’s ambassador to Myanmar from 2015 to 2018.

“The charges are trumped up, the judiciary is stacked or strongly influenced by the military and it has been for many years. The legal system is a farce. It’s been the greatest weakness in Myanmar’s transition to democracy and it’s only got worse since the coup.

“Even with access to a good lawyer, I wouldn’t expect a positive outcome from the trial unless there was a directive from the Senior General [Min Aung Hlaing].”

Coppel said Turnell’s proximity to Suu Kyi, who was this week charged with sedition, was “what’s got him caught up in all this”.

“The big fish is Aung San Suu Kyi and what they will be wanting to show is that she has betrayed secrets to a foreigner. They’ll need Sean for that.”

Asked whether Dutton had raised Turnell’s plight with Myanmar’s defence minister, a spokeswoman referred the Herald and The Age to the Defence statement on Johnston’s phone call.

Austin “called on Myanmar’s military to change course” during the meeting, a Pentagon spokesman said, and it was condemned by the US and UK embassies in the country this week over the torching of almost an entire village in the central Magway region. The junta denied responsibility, blaming it on “terrorists”.