‘Baby killer!’: Relatives of heavily-pregnant Royal Mail worker, 26, murdered in frenzied knife attack that also killed her unborn child hit out as her ex-lover is jailed for life 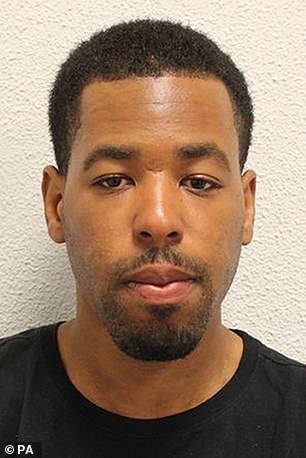 A jilted boyfriend who was branded a ‘baby killer’ today at the Old Bailey has been jailed for life for stabbing his heavily pregnant ex-girlfriend and their unborn baby to death.

‘Pure evil’ Aaron McKenzie, 26, crept into Kelly Fauvrelle’s bedroom in south London in the early hours of June 29 last year and stabbed her 21 times after he had found an online receipt for a gift she had bought her new partner.

Their son Riley was delivered via  emergency C-section at the scene – seven weeks before the due date – but died four days later in hospital.

Judge Mark Lucraft gave him a life sentence with a minimum term of 35 years, calling the late-night attack ‘the most vicious and deliberate killing’.

It was the ‘cowardly’ response to learning Ms Fauvrelle wanted nothing to do with him, and his actions afterwards demonstrated no ‘sorrow or remorse’, he said.

The judge added: As is clear from the course if the trial you made no genuine expression or statement of remorse.

‘The killing of Kelly was particularly violent and extreme. In the aftermath you destroyed evidence and concealed evidence from police which may implicate you. Your post death conduct involved you masquerading as an innocent person.’

Crane operator McKenzie, from Peckham, south London, gave the judge a thumbs up as he was sent down while Ms Fauvrelle’s family wept in court.

One of them, thought to be Ms Fauvrelle’s cousin, shouted out at him: ‘Yes. I hope you have a good time in jail. Baby killer.’ 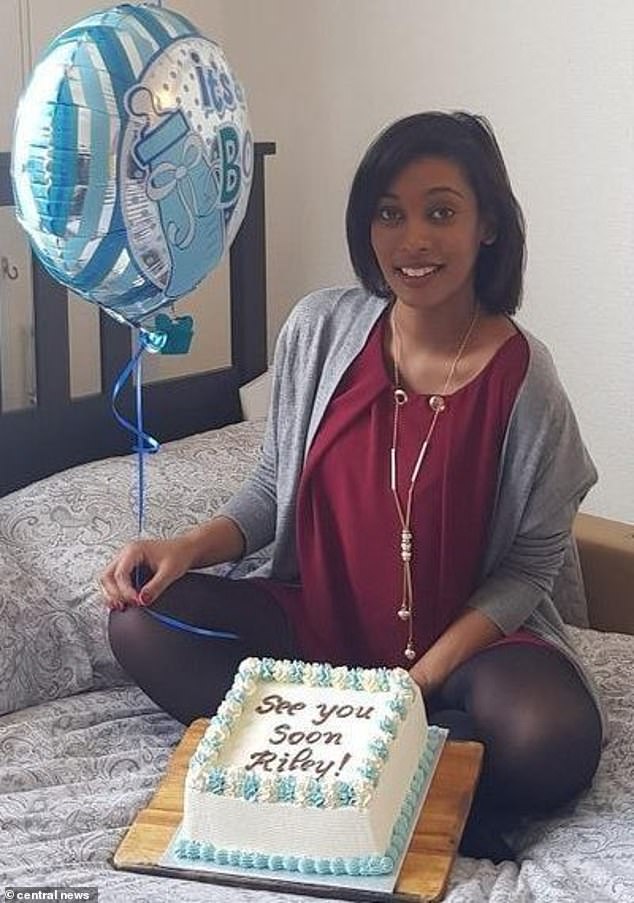 Aaron McKenzie crept into Kelly Fauvrelle’s bedroom in south London on June 29 last year and stabbed her 21 times after he had found an online receipt for a gift she had bought her new partner. McKenzie’s son baby Riley was delivered via emergency C-section at the scene – seven weeks before the due date – but died after four days on a ventilator in hospital

After killing his ex-partner, McKenzie went ahead with his driving lesson as normal

The Old Bailey previously heard how emergency services were called to Ms Fauvrelle’s family home shortly after 3.15am on June 29 when the victim’s sister, Melissa, heard screaming from within the property.

Around five hours later, McKenzie had a driving lesson.

Prosecutor Duncan Penny QC said the driving instructor sent a text to McKenzie at 7am that morning asking if he was still available for the lesson, to which McKenzie replied: ‘All good.’

The court heard McKenzie was picked up by his driving instructor at 8.30am, whose behaviour was deemed by her to be ‘completely normal’.

Ms Fauvrelle’s mother, sister, and brothers endured hearing details of her terrible final moments and told the court how they tried everything to save her.

After the attack McKenzie took a driving lesson and pretended to the family he was devastated by Ms Fauvrelle’s death.

But jurors were told he used his intimate knowledge of the house to sneak in through her patio door which she kept open in the evening.

CCTV captured him stalking through the darkened streets before he vanished inside the house.

He left 11 minutes and 20 seconds later and dashed off along the same street in Thornton Heath in South London and off into the distance.

At trial McKenzie invented a killer called ‘Mike’ in an effort to beat the charge after initially confessing to police.

McKenzie told the court he had even extracted a confession out of him.

A statement by Ms Fauvrelle’s father, read by her cousin said: ‘She was robbed of the chance to be a mother to her son Riley.

‘Visions of what he did to my beautiful daughter haunt my dreams.’

Tearfully the cousin added: ‘She was very small in size but had a big heart.

‘The bond between her and her dad was so special. Kelly especially loved children and the whole family was looking forward to watching her becoming a mother.’

Her sister added: ‘I miss her every day. I tried to save her but I couldn’t..

‘I hear her screams most nights. Our sons were going to grow up together, blood brothers we said.

‘It was a horror scene, unimaginable, evil merciless. It was an act of pure evil.’

Prosecutor Duncan Penny told the court: ‘In the early hours of the morning of Saturday 29 June 2019 within a family home in Thornton Heath in South London, Kelly Fauvrelle, a heavily pregnant young woman lay in her bed in the middle of the night. 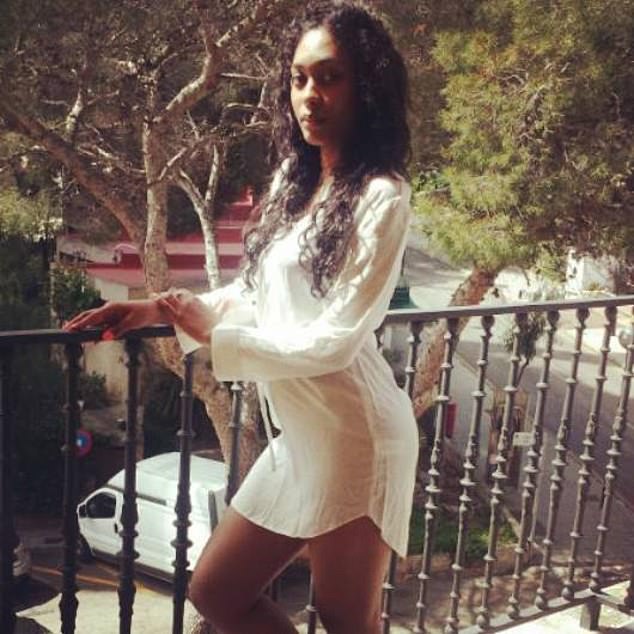 Ms Fauvrelle’s family wept at the Old Bailey today as the jury foreman returned guilty verdicts following just two hours of deliberation. Her relatives cheered as McKenzie was led away and one family member, believed to be a cousin of the victim shouted: ‘Baby killer’ 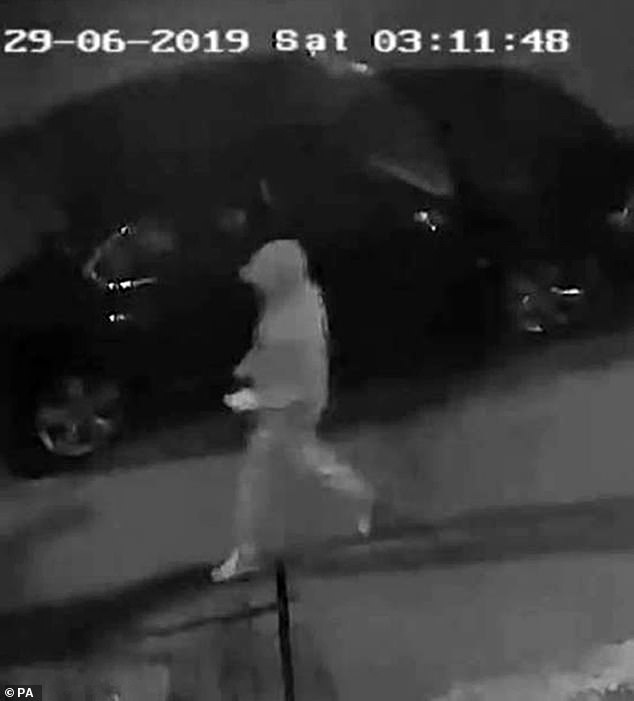 ‘In her womb, she was carrying a little boy, who was later to be named Riley during his very short life. She was 33 weeks pregnant.

‘But when she had gone to bed on the night of Friday 28 June 2019, she had retired to her bedroom whilst all around her, under the same roof, other members of her family slept in the various other bedrooms of the house.

‘Kelly’s bedroom was on the ground floor at the rear of the family house at Raymead Avenue, Thornton Heath.

‘At around 3.15 am that morning, however, an intruder broke into her bedroom through the rear patio doors which formed part of the back wall of her room onto the back garden.

‘That intruder proceeded to launch a vicious and a cowardly attack upon her, inflicting a total of 21 stab wounds with a knife. 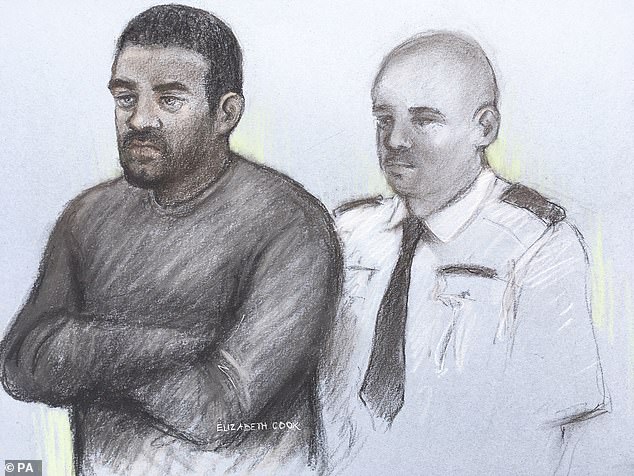 At trial McKenzie (depicted in a sketch) invented a killer in an effort to beat the charge after initially confessing to police. McKenzie said he had even extracted a confession out of him

‘In the process the intruder murdered not only Kelly Fauvrelle, but through his attack upon Kelly he killed Riley, the unborn child she was carrying. That intruder was this defendant, Aaron McKenzie.

‘As well as being their killer, the intruder was, in fact, both the former partner of Miss Fauvrelle and the father of Riley, the unborn child.

‘The Crown’s case is that this was a vicious and a deliberate killing – perhaps you will conclude in due course the cowardly response of a man desperately jealous about the fact that the mother of his child yet to be born had moved on and now wanted very little to do with him.

‘Whilst the motivation of this defendant may remain unclear at the conclusion of this trial, what he did that night and what he intended in that attack most certainly does not.’

Ms Fauvrelle was in a relationship with McKenzie but left him in February last year, the Old Bailey heard.

McKenzie denied murder, manslaughter and possession of an offensive weapon.

He was convicted of murder and was jailed for life with a minimum of 35 years.