Bring back the lifeguards! Backlash builds over RNLI scrapping patrols after four tombstoners are injured in Dorset – as thousands will head to the beaches and parks again today to soak up 75F sun

The RNLI is facing demands to bring its lifeguards after four tombstoners were injured in Dorset as thousands head to beaches and parks again today to soak up the 75F (23C) sun.

Sixteen beach patrols out of a possible 248 have been reinstated prompting furious backlash as people flock to the coast.

Some lifeguards have started patrolling for free but without the RNLI’s backing they don’t have access to official lifesaving equipment, The Times reports. 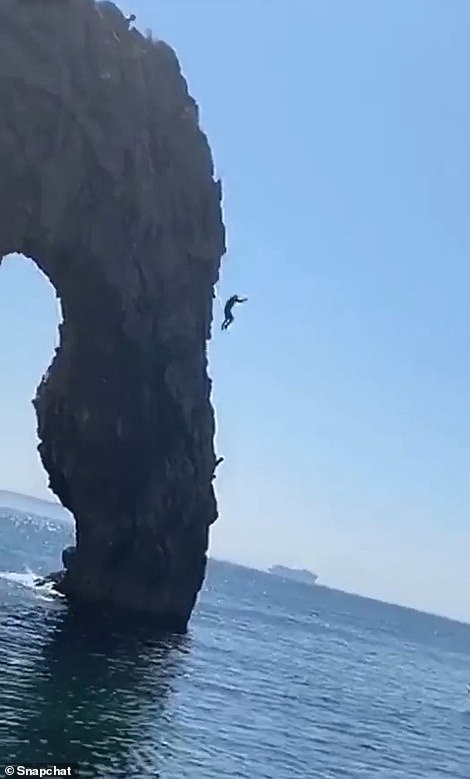 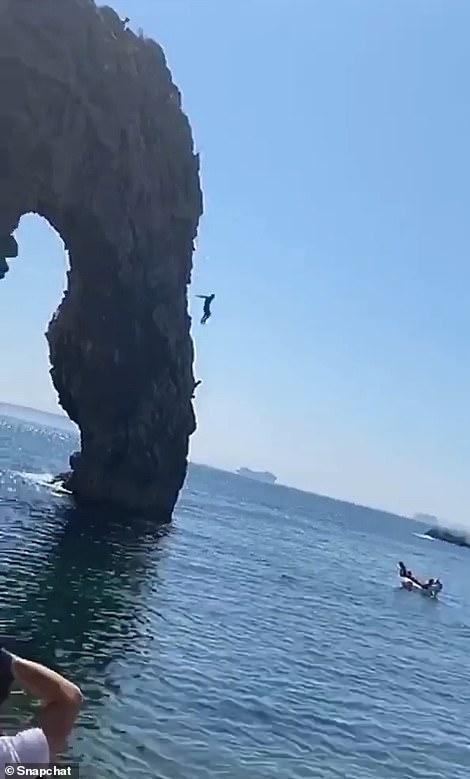 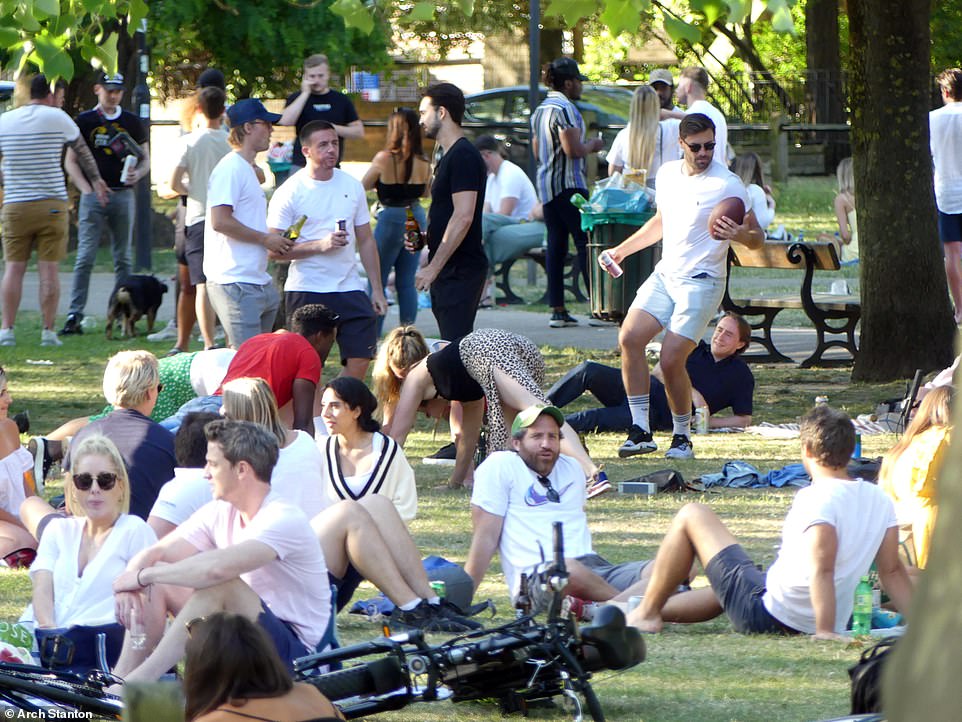 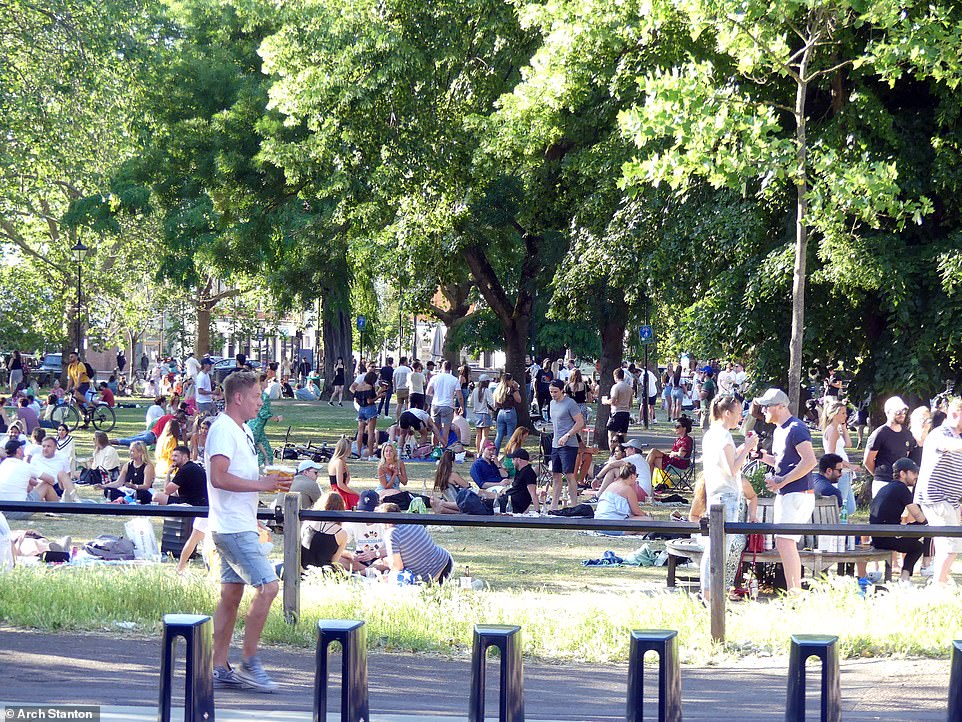 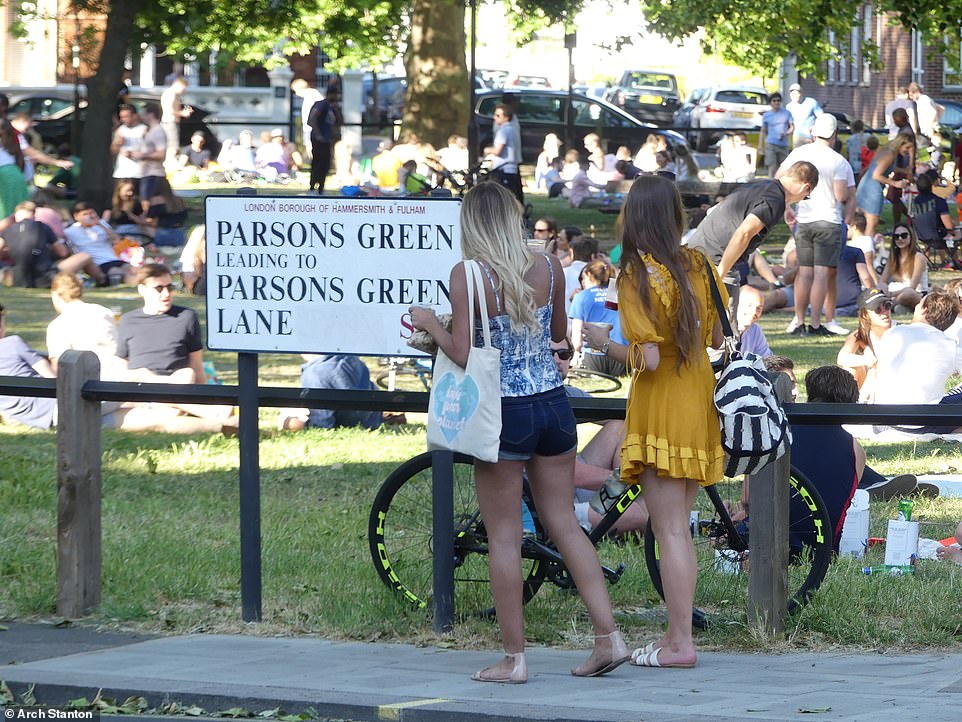 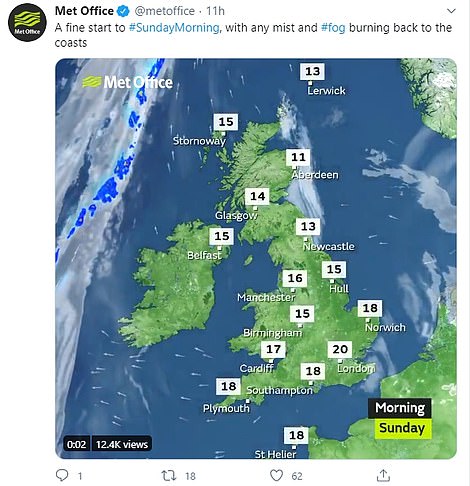 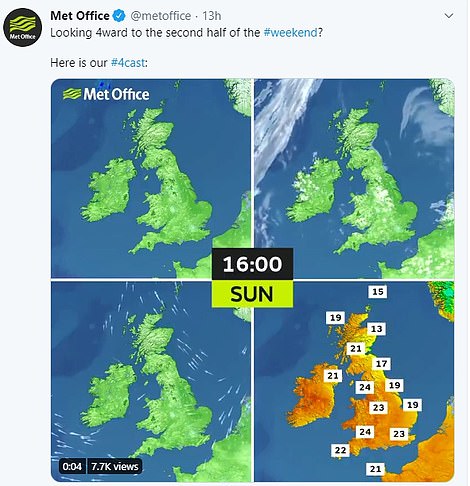 Pictured: Today’s weather forecast from the Met Office as temperatures are set to climb even higher this afternoon 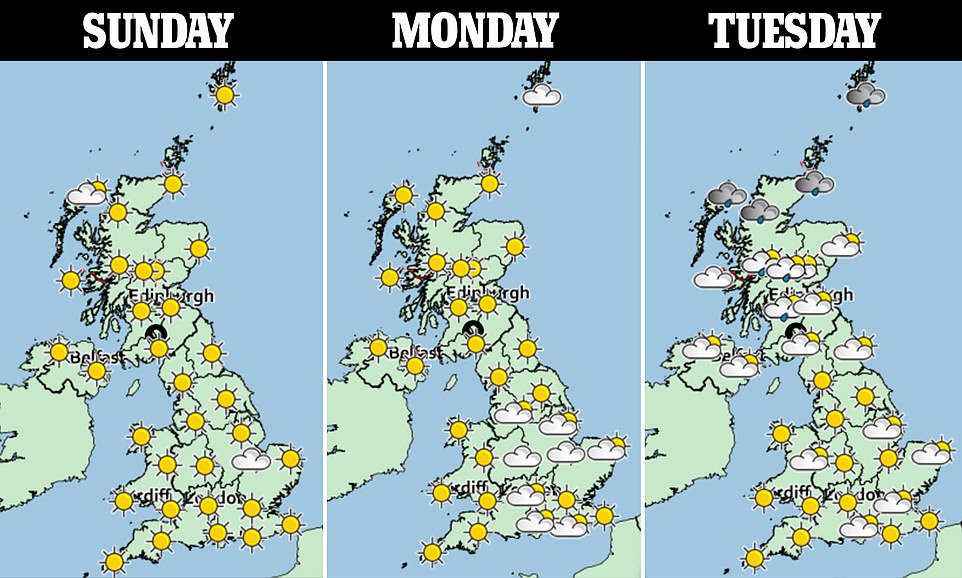 Hundreds have joined the #ReturnToShore campaign, with one saying ‘The RNLI lifeguard service is the only emergency service which did not continue during the pandemic. Why?’

One employee, who has started patrolling on a voluntary basis, said: ‘It feels as though the RNLI bosses don’t have our back. We’re volunteering with minimal equipment and at far greater risk.’

Beach-goers were crammed together to make room for air ambulances to land at Durdle Door in Dorset yesterday after four people injured themselves jumping off cliffs into the sea.

The four unidentified jumpers vaulted from the top of the ancient limestone arch, which reaches 200ft at its highest point, and are in critical condition, according to Dorset Police. 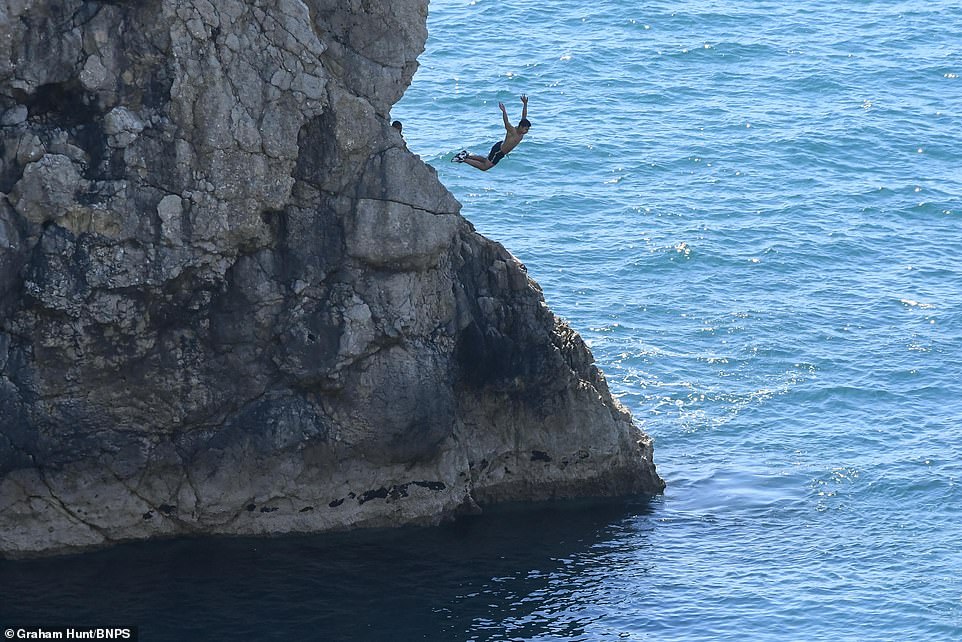 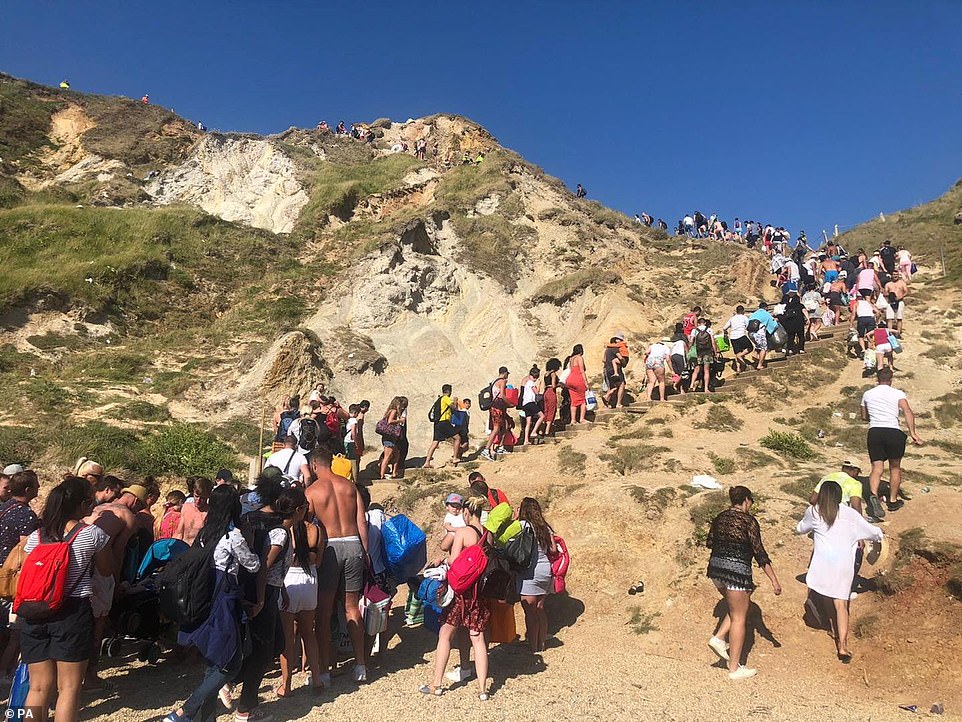 Images from the scene show a mass of sun-seekers crammed into one area, near the only available exit, as they try to vacate the area as the air ambulance lands.

Despite initially claiming that only three people were hurt jumping off the famous archway, it emerged last night that the figure is one higher.

But former Conservative MP Charlotte Leslie says that the RNLI could fun a full £20million lifeguard service from the £124m in crisis funds that it reported in 2018.

The organisation says that using such funds is not a long-term solution and the group expects a £45million shortfall this year.

Meanwhile, people were slammed for running around naked and causing harassment on a popular quayside, have caused a pub to shutdown.

The rising levsl of anti social behaviour on The Quay in Exeter, Devon, has led to the Prospect Inn closing down its takeaway service.

The pub said: ‘WE ARE DONE. The anti social behaviour on the Quay worsens day by day, but Friday night was the final straw: abuse, harassment, urination and public nudity.’

Wayne Rooney defers portion of his £90,000-a-week wages to help Derby through their cash crisis as newly-appointed Rams boss agrees to spread pay-packet over longer period Wayne Rooney will defer a portion of his wages to help Derby in their cash crisis The new Rams manager was given a two-and-a-half year contract last month He has agreed to spread his £90,000-a-week […]

END_OF_DOCUMENT_TOKEN_TO_BE_REPLACED

Originally Published by: Jake Paul trains for boxing return, claims ‘it was supposed to be Conor McGregor’ Relaxed Conor McGregor says ‘we’ll build it back’ Five next fights for Michael Chandler after UFC star impresses with brutal debut Conor McGregor admits shout from Dustin Poirier’s cornerman got inside his head Octagon girl Camila Oliveira took advantage of UFC 257 to […]

END_OF_DOCUMENT_TOKEN_TO_BE_REPLACED

This Meal Delivery Service Sends Gourmet, Celeb Chef-Cooked Foods To Your Door—and We Tried It

After 10 months of quarantining and making dinner (and breakfast and lunch!) at home almost every single day, my family and I are just about cooked-out. Yes, even a food editor gets tired of food: the monotonous grocery lists, the never-ending meal planning, the constant chopping and cooking, and the endless pile of dirty dishes in the sink (how can […]

END_OF_DOCUMENT_TOKEN_TO_BE_REPLACED

Dr. Deborah Birx is opening up about her time working as former president Donald Trump's U.S. coronavirus response coordinator. During a candid interview on CBS' Face the Nation, Birx — who announced last year that she would retire after helping President Joe Biden and his team with their pandemic response amid his transition — shared that quitting was something that […]

END_OF_DOCUMENT_TOKEN_TO_BE_REPLACED
This website uses cookies to improve your user experience and to provide you with advertisements that are relevant to your interests. By continuing to browse the site you are agreeing to our use of cookies.Ok