Americans are one step closer on Thursday to knowing more about what led to the FBI raid on Donald Trump’s Mar-a-Lago property.

US Magistrate Judge Bruce Reinhart instructed the Department of Justice (DOJ) to file the affidavit – which federal agents used to obtain a warrant for a search of the ex-president’s home – publicly by noon on Friday.

He agreed with federal prosecutors’ arguments for keeping parts of it redacted, according to CNN.

The DOJ met its 12pm deadline on August 25 to submit proposed redactions to the affidavit which federal agents used to then obtain a warrant to search the ex-president’s palatial Florida home.

Federal agents raided Trump’s Mar-a-Lago resort in the early hours of Monday, August 8, in an operation linked to the ex-president’s handling of classified documents.

It’s set off a partisan dogfight between Republican Trump allies accusing President Biden of politicizing the DOJ and officials who maintain they are working impartially and urging the GOP to bring the heat down.

Fuel was tossed on the fire when Attorney General Merrick Garland professed that he personally gave investigators the go-ahead to seek a search warrant that led to the raid.

But now, Trump and his allies are calling for the release of the full, unredacted affidavit used to get the warrant in the first place. 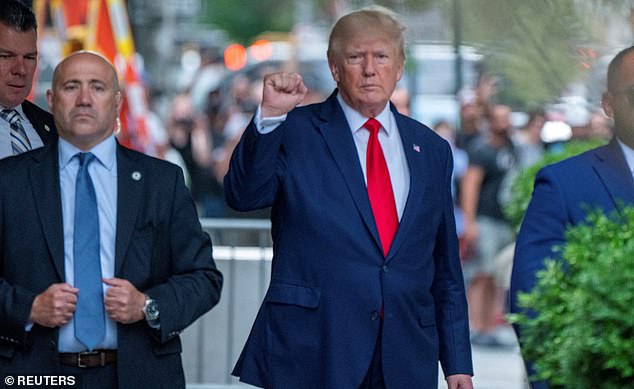 Donald Trump has been calling for the full affidavit to be released, which DOJ investigators warn could severely hamper their investigation

The full affidavit would provide a potentially explosive picture of why investigators sought a warrant for their raid of Mar-a-Lago, including key details about what the government knew, or believed, about Trump and when.

Several large news outlets including the New York Times and NBC News petitioned the federal court which granted the warrant to also release the affidavit.

The DOJ, however, has vehemently stood against releasing any part of the document over concerns it could irreparably harm prosecutors’ investigation at a critical juncture.

It’s highly unusual for affidavits to be made public before the government brings charges, given the wealth of sensitive and revealing information they normally contain.

Nevertheless federal magistrate Judge Bruce Reinhart sided with the media and gave DOJ investigators a week to submit their proposed redactions to the document, due at noon on Thursday.

Reinhart reasserted his belief in its public disclosure in a Monday court filing – while also attempting to lower expectations about what could be revealed.

The judge said the government had failed to provide a sufficient argument for why it should be kept under wraps, ‘given the intense public and historical interest in an unprecedented search of a former President’s residence.’

However, he also confessed to believing that the ‘partial redactions will be so extensive that they will result in a meaningless disclosure, but I may ultimately reach that conclusion after hearing further from the Government.’

The judge suggested he believed that releasing the full affidavit could lead to harassment and intimidation of people revealed to be involved.

Earlier this week Trump sued the federal government over the raid for allegedly violating his Fourth Amendment rights.

‘Politics cannot be allowed to impact the administration of justice. President Donald Trump is the clear frontrunner in the 2024 Republican Presidential Primary and in the 2024 General Election, should he decide to run’, the lawsuit reads.

It adds that the raid on Mar-a-Lago was ‘shockingly aggressive’ and the move showed ‘no understanding of the distress that it would cause most Americans.’

‘Like all citizens, (Trump) is protected by the Fourth Amendment to the United States Constitution. Property seized in violation of his constitutional rights musty be returned forthwith’.

The lawsuit also calls for a Special Master to be appointed to review the materials taken by the government.