“It’s impossible to recreate here in this courtroom the reality of fighting and the conditions that existed in Afghanistan,” barrister Bruce McClintock said.

He was speaking from Federal Court 18D, a temperature-controlled, soft-carpeted courtroom in Queens Square, with snatched views of Sydney Harbour. 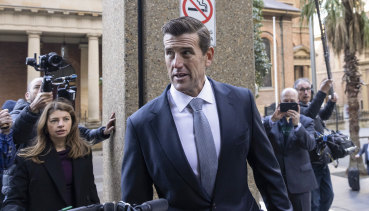 Ben Roberts-Smith arrives at the Federal Court of Australia in Sydney for the first day of his defamation case on Monday.Credit:Brook Mitchell

He was talking about the circumstances in which his client, decorated SAS soldier Ben Roberts-Smith, took actions and killed men during his tour of Afghanistan that would later be described as war crimes, a claim he denies.

Mr Roberts-Smith is suing The Age, The Sydney Morning Herald and The Canberra Times for defamation, and it is in this context that Federal Court judge Anthony Besanko will be asked to make findings on what happened amid the horror, heat and muck of a battle on the other side of the world more than a decade ago.

But as the curtain lifted on the trial on Monday, it was the troops of the defamation business who were assembled for battle, a phalanx of lawyers, media types and reputation managers whose egos were stoked for a hearing that has been dubbed “the trial of the century”.

The Roberts-Smith camp clustered on the left side of the room, with the plaintiff sitting at the lawyers’ table beside his solicitor, the notoriously front-footed defamation lawyer Mark O’Brien, whose silver hair was swept back from his face like an underwater lizard. 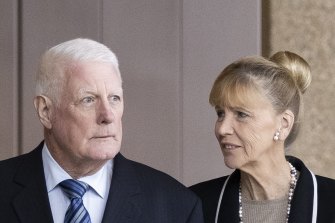 The row in front was occupied by solicitors including Monica Allen, who was photographed by News Corp newspapers holding hands and riding scooters with Mr Roberts-Smith last year — conduct that she later conceded was “unwise”.

His parents sat in the row behind, next to Channel Seven boss Bruce McWilliam, double-thumb texting on his mobile phone in the glow of the window. Channel Seven, which employs Mr Roberts-Smith as a general manager in Queensland, at one stage provided a loan to Mr Roberts-Smith so he could pay his legal costs. That loan has since been repaid and reportedly replaced by another loan from Seven chairman, Kerry Stokes’ private family company.

Several rows back, behind some woolly-socked court watchers, sat Mr Roberts-Smith’s PR consultant Helen McCombie, a founding partner of the corporate reputation firm Citadel-MAGNUS, who he has retained for the purposes of media management.

It is not known what if anything she had to do with an item in the Daily Mail news site that featured copious photographs of a topless Mr Roberts-Smith running up and down the “Steps of Doom” in Woolloomooloo over the weekend. He was “limbering up for one of his toughest battles”, the article reported, adding that his former wife, who is expected to testify against him, was last seen looking tense as she returned to her white picket-fenced Brisbane home. 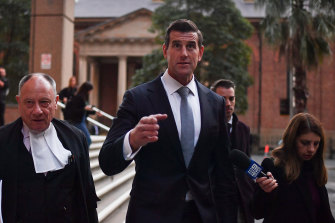 Ben Roberts-Smith at the end of the day with his barrister Bruce McClintock, SC.Credit:Getty Images

The other side of the courtroom was occupied by the Nine team, which now owns The Age and the Herald, including executive editor James Chessell and veteran investigative reporter Chris Masters, who is being sued along with journalists Nick McKenzie and David Wroe. McKenzie planned to be in Sydney for the trial but is stuck in lockdown in Melbourne.

Mr Roberts-Smith observed the proceedings with his head slightly cocked to one side.

Mr McClintock, for whom this will be the last big case before he retires, framed the trial as a contest between a brave soldier prepared to lay down his life for his country and those who would seek to bring him down out of jealousy and spite – cowardly soldiers, poor soldiers and credulous journalists.

In all, the media alleges that Mr Roberts-Smith was responsible for six unlawful killings. One element of the defence, which was recently dropped, included the allegation that Mr Roberts-Smith killed a seventh unarmed Afghan man. Mr McClintock used this development to indicate that he intends to go for broke.

“At the end of the trial we will put to Your Honour that this justifies an aggravated damages claim and I will put to you that an allegation of murder with no basis justifies the largest award of damages ever in this country,” Mr McClintock said.

It is a case that will make or break reputations, with millions of dollars at stake. Whatever the result, the scene has been set for a monumental showdown.