Boris Johnson was ‘driving’ the government’s coronavirus response despite ‘skipping’ five Cobra meetings at the start of the outbreak, Gavin Williamson insisted tonight.

The Education Secretary defended the PM’s handling amid a mounting backlash at the slow action in gearing up to the looming crisis.

Mr Johnson has been accused of taking a backseat role in shoring up the nation’s pandemic defences during January and February, despite mounting concern from scientists over the accelerating health emergency in Wuhan.

As his more junior colleagues took the reins on virus mitigation, Mr Johnson’s personal life reportedly commanded his attention, namely how to break the news of Carrie Symonds’ pregnancy to his family.

The insider also alleged that Whitehall had been fixated on Brexit, and long-term crisis preparations fell by the wayside as key staff were diverted from pandemic contingencies to thrash out no-deal planning.

It also emerged the government shipped 260,000 items of personal protective equipment to China amid warning sirens from doctors that the UK was woefully under-prepared to cope with a pandemic.

Former chief government science adviser David King told Sky News today that he could not recall a Cobra meeting during his time in Whitehall that was not chaired by Tony Blair or Gordon Brown.

But asked at the daily No10 press briefing about Mr Johnson’s absence from Cobra meetings until the beginning of March, Mr Williamson said: ‘The Prime Minister from the moment that it became clear that there were challenges in terms of coronavirus developing in China has absolutely been leading our nation’s effort to combat the coronavirus, making sure that resources or money is not a concern for any department, especially the health service.’

He added that ‘many Cobra meetings’ are led by the departmental minister.

He said: ‘The focus the Prime Minister was putting on this and has continued to put on this has meant that this is the whole Government effort.’

As fury grew over the government’s lack of preparedness: 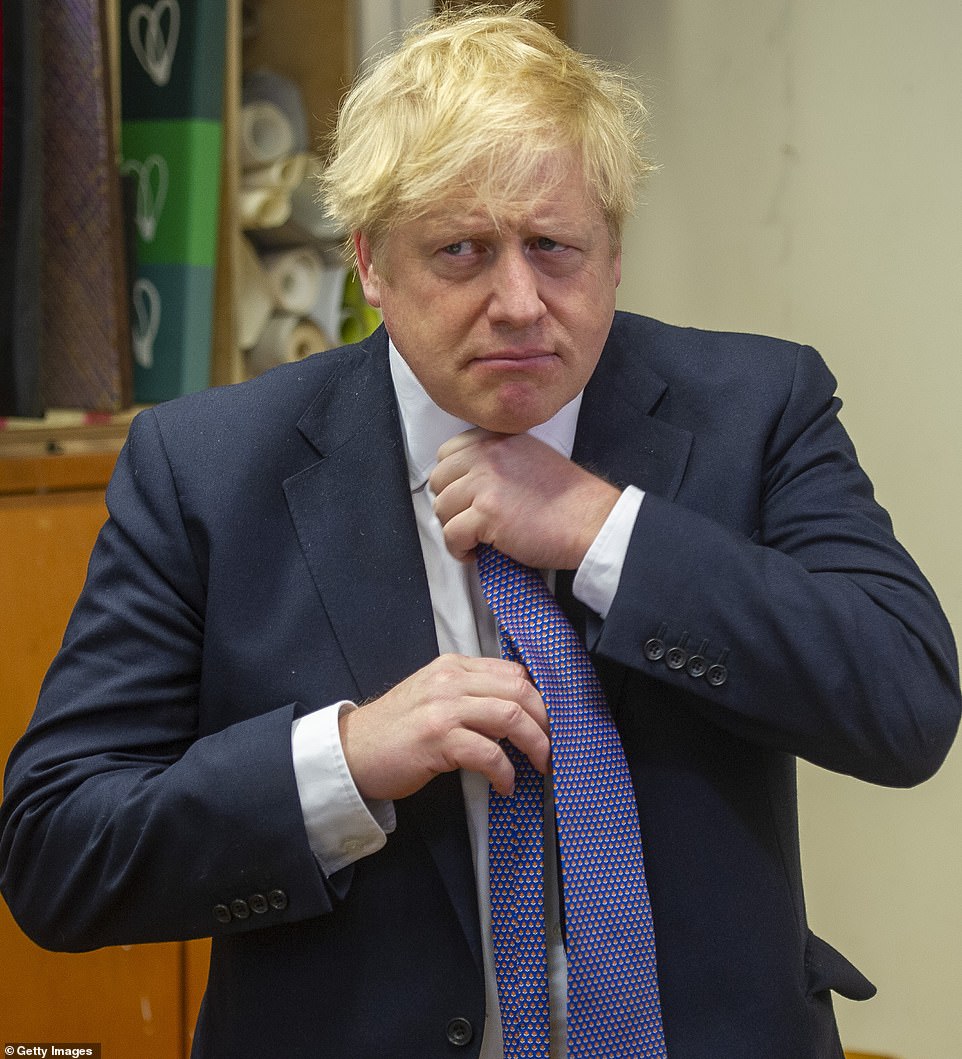 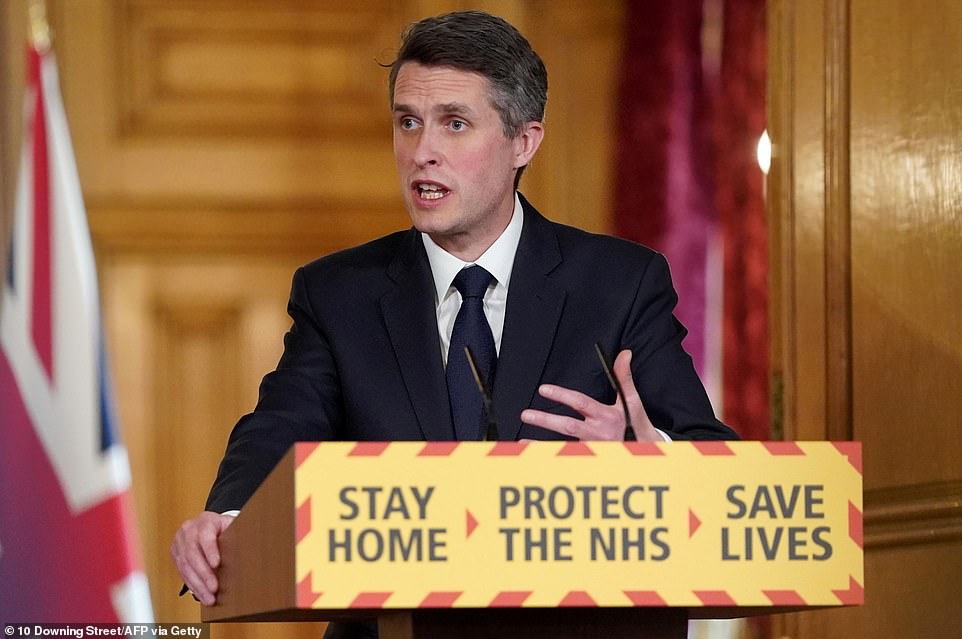 At the daily Downing Street press briefing, Education Secretary Gavin Williamson defended the PM’s handling amid a mounting backlash at the slow action in gearing up to the looming crisis 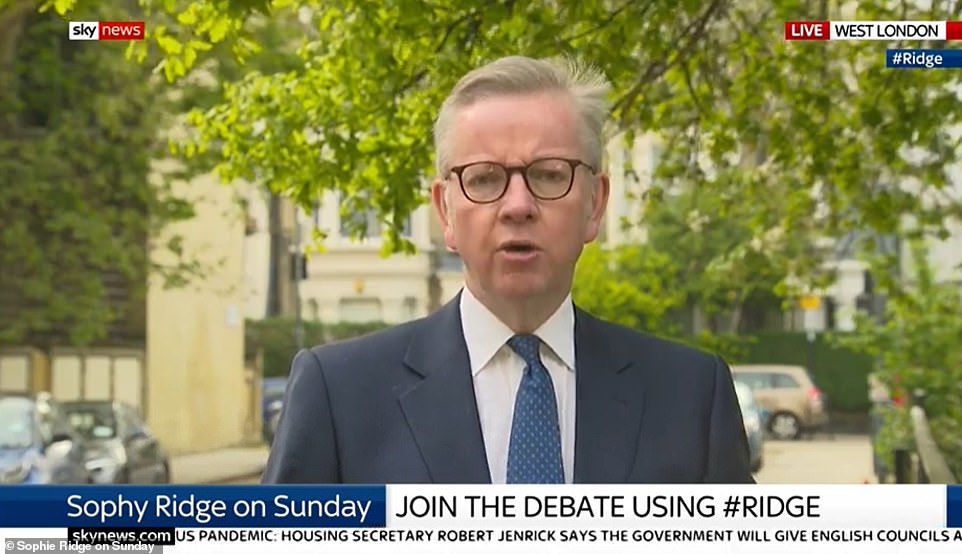 Mr Gove, who is part of the so-called ‘quad’ of ministers steering the government’s response while the PM recovers from his own battle with the disease, this morning called the allegations ‘off-beam’ 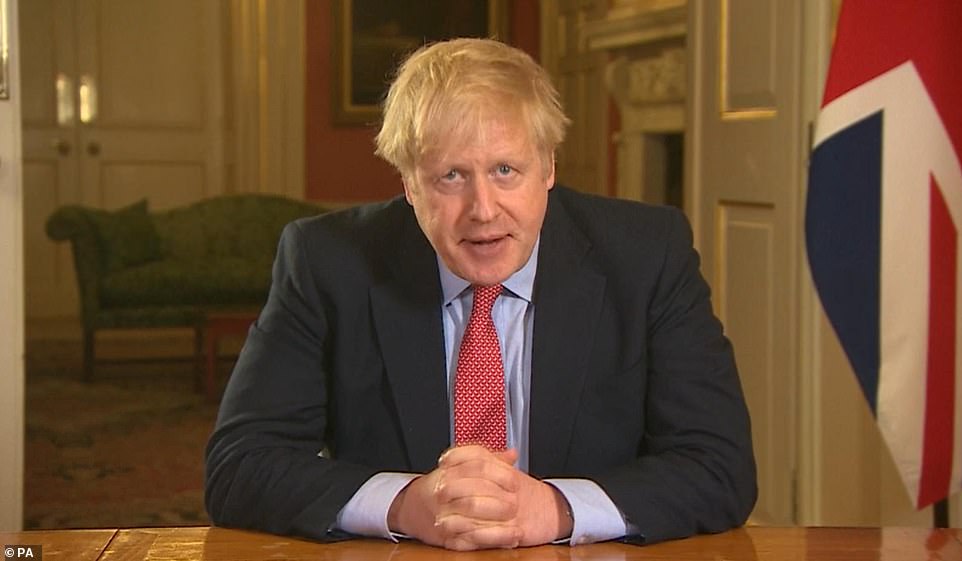 Mr Gove, who is part of the so-called ‘quad’ of ministers steering the government’s response while the PM recovers from his own battle with the disease, this morning called the allegations ‘off-beam’.

Speaking to Sky’s Sophy Ridge, the minister for the cabinet office said: ‘There are one or two aspects of the Sunday Times report that are slightly off-beam.’

He confirmed the PM did not attend the Cobra meetings, but added: ‘He didn’t. But then he wouldn’t. Because most Cobra meetings don’t have the Prime Minister attending them.

His remarks were scorned by Labour’s Jon Ashworth, who branded them ‘possibly the weakest rebuttal of a detailed expose in British political history.’

But Number 10 last night insisted Mr Johnson ‘has been at the helm’ of the government’s response to the crisis.

Mr Gove said he would not provide a detailed rebuttal of the newspaper article, which quoted a senior government aide who tore into the PM’s laid-back approach in the early stages.

Criticising the PM, the Downing Street insider said: ‘There’s no way you’re at war if your PM isn’t there.

‘And what you learn about Boris was he didn’t chair any meetings. He liked his country breaks. He didn’t work weekends.

‘It was like working for an old-fashioned chief executive in a local authority 20 years ago. There was a real sense that he didn’t do urgent crisis planning. It was exactly like people feared he would be.’

A Number 10 spokesman said: ‘The Prime Minister has been at the helm of the response to this, providing leadership during this hugely challenging period for the whole nation.’ 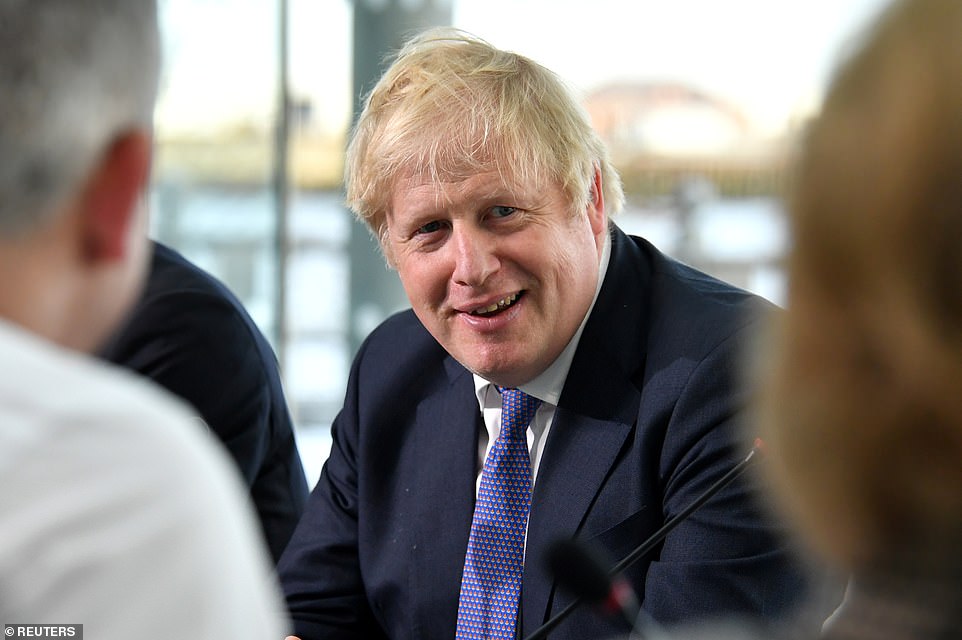 Brexit Day: Boris Johnson chairs a cabinet meeting at the National Glass Centre at the University of Sunderland, Sunderland,  January 31 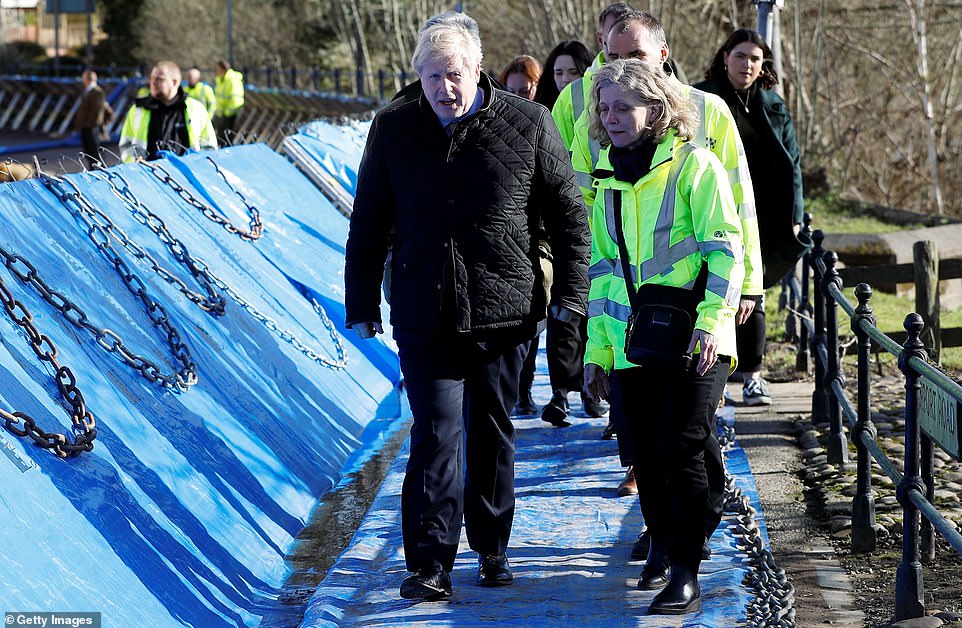 Early March: Boris Johnson visits Bewdley to see recovery efforts following recent flooding on March 8, 2020, when he was also under pressure over coronavirus

Schools could start returning within three weeks under a ‘traffic light’ plan being pushed by senior ministers to ease lockdown misery – amid Cabinet splits over whether the government should risk more deaths from the disease to save the plunging economy.

The fledgling ‘exit strategy’ would see the country get back up in running in stages after May 11, with primary, GCSE pupils, and nurseries potentially going back part-time.

Meanwhile, clothes shops and garden centres could be among the ‘non-essential’ stores given a ‘green light’ to reopen with precautions to protect customers.

Rail services would be brought up to normal levels, with commuters probably urged to wear facemasks, and the NHS would resume carrying out non-urgent procedures.

A second ‘amber’ stage later in the summer would see more of the economy revived, with all employees told to go back to work and some social gatherings allowed.

However, it might not be until later in the year that pubs and restaurants can reopen and sporting events get up and running.

And over-70s face a ‘red light’ for many months more, potentially having to wait for a vaccine before going back to normal life.

‘Nobody can say that the Prime Minister wasn’t throwing heart and soul into fighting this virus. His leadership has been clear. He’s been inspirational at times.’

Mr Gove confirmed the government shipped 260,000 items of personal protective equipment to China despite warning sirens from doctors that the UK was woefully under-prepared to cope with a pandemic.

But he claimed the PPE had not come from the UK’s pandemic stockpile, and Beijing had since sent back ‘far more’ than was dispatched to them.

During the Parliamentary recess in mid February, Mr Johnson and his now fiancée Carrie Symonds retreated to the government’s grace-and-favour mansion at Chevening.

There, Mr Johnson’s personal life commanded the majority of his attention, as he was formulating how to break the news to his family his partner was pregnant, according to the Sunday Times, who reported aides were instructed to keep their memos to the PM short.

Former Tory party leader Iain Duncan Smith backed the Government’s record on preparing for coronavirus, telling Sky News: ‘The reality about this is that the world did not realise the extent of the pandemic in China because it is quite clear now that China suppressed and hid information, for whatever reasons we may yet discover.

‘And that the World Health Organisation, which has serious questions to answer, did not tell the rest of the world that this was a pandemic that was more than likely to spread.’

He added: ‘There are questions, yes, that will be asked, but later on, not now.

‘We have no idea who is leaking this information, whether they are disgruntled or not, we don’t know.

‘But the reality is, questions will be asked, but it is right to ask them once we have completed this process, got on top of this and then managed to get the country back up and running.’

The comments came as controversy continued to grow over the insufficient levels of PPE for frontline NHS staff, and criticism that not enough people were being tested for the killer virus.

Labour leader Sir Keir Starmer accused the Government of dragging its feet in dealing with the pandemic.

Writing in the Mail on Sunday, Sir Keir said: ‘The Government was too slow to enter the lockdown.

‘It has been too slow to increase the number of people being tested. 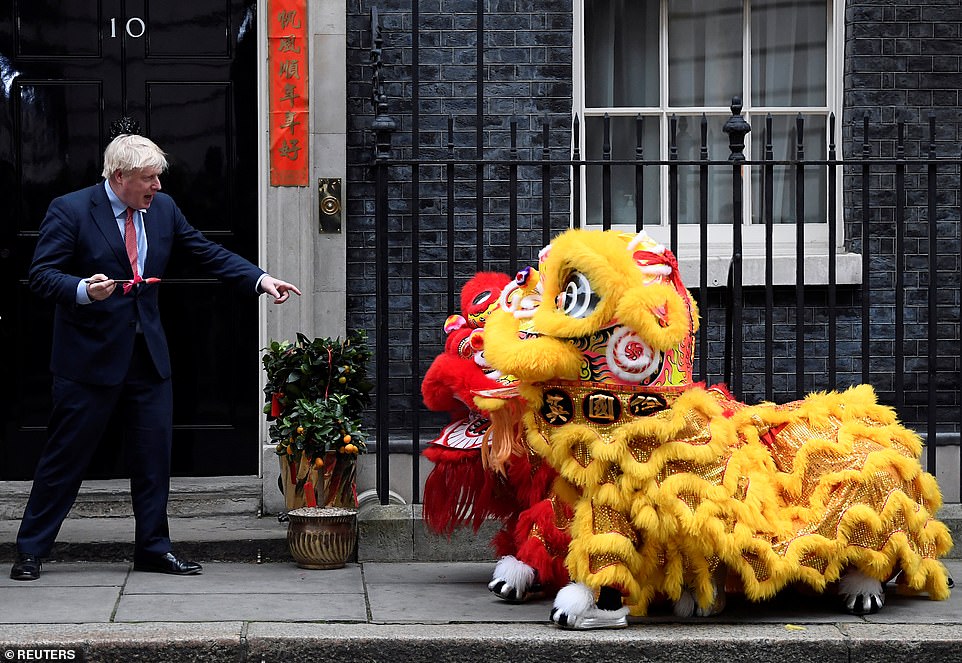 Boris Johnson gestures as he watches a performance during celebrations for Chinese Lunar New Year at Downing Street in London, Britain January 24

‘It has been too slow in getting NHS staff the critical equipment they need to keep them safe. We need to make sure these mistakes are not repeated.

‘Other countries have begun to set out a road map to lift restrictions in certain sectors of the economy and for certain services, especially social care, when the time is right.

‘This of course must be done in a careful, considered way with public health, scientific evidence and the safety of workers and families at its heart. But the UK Government should be doing likewise.’

Medial care staff have expressed alarm as surgeons are being advised ‘not to risk their health’ by working without adequate PPE amid fears that hospitals could run out of supplies.

The Royal College of Surgeons of England (RCS) said it was ‘deeply disturbed’ that medics could be asked to reuse items or wear different kit when treating Covid-19 patients.

Healthcare staff treating positive patients have been given guidance that they should wear long-sleeved disposable fluid-repellent gowns but, because of shortages, they have just been advised they could be asked to reuse PPE or wear aprons.

The fear from medics comes as more than 15,000 patients have now died in hospital after testing positive for the disease in the UK, with thousands more deaths expected in care homes.

Professor Stephen Powis, the national medical director of NHS England, told a Downing Street briefing that it was ‘absolutely critical above everything else’ that supplies were delivered to the front line so the guidance on on wearing gowns could be followed.

‘I know Government is working incredibly hard to get those procurements in as you have heard,’ he said on Saturday.