Boy, two, was choked to death by bedroom cord

Boy, two, was choked to death by bedroom cord after heartbroken mother ‘left him for a second’, inquest hears as coroner issues warning over roller blinds

A two-year-old boy was choked to death by the cord of a bedroom blind after his mother ‘left him for a second’, an inquest heard.

Joey Walker had only been left on his own for ‘seconds’ when he became trapped in a looped cable installed by a previous tenant.

His heartbroken mother, Chloe Armstrong, told how she desperately tried to save his life after discovering him unconscious on April 5 last year.

The 28-year-old spoke out over the tragic accident as a coroner warned other children’s lives are at risk.

Ms Armstrong, from Denton, Greater Manchester, said: ‘I was collecting the washing from my room and his room and taking it downstairs. 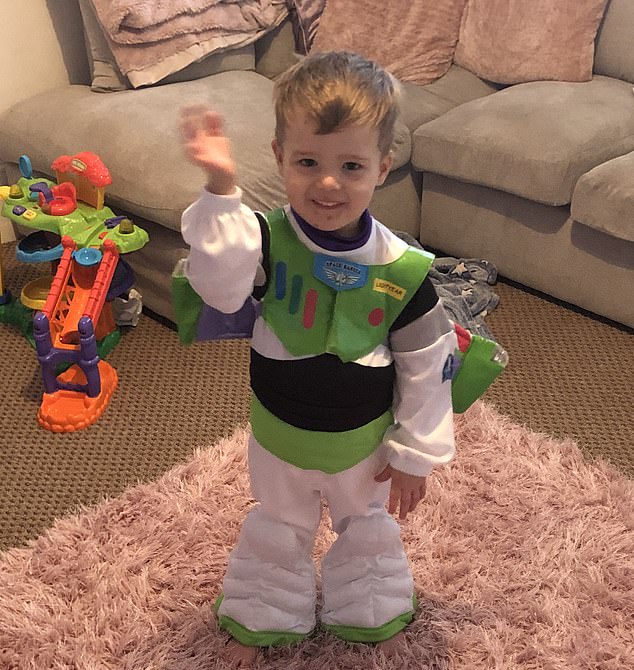 ‘Joey was in my bedroom, I left him for a second. He liked playing with the washing machine. His job in the house was to help me fill it up and turn it on.

‘I was shouting him to come down – but he didn’t follow. ‘I could hear him messing about and then it was just silence.

‘I went upstairs and that’s when I found him.’

An inquest heard that the blind cord had been installed by a previous tenant at the rented house on Prince Edward Avenue when tragedy struck on April 5.

Senior coroner Chris Morris said he was concerned that landlords had no obligation to inspect roller blinds, or make sure cords were safety-compliant. 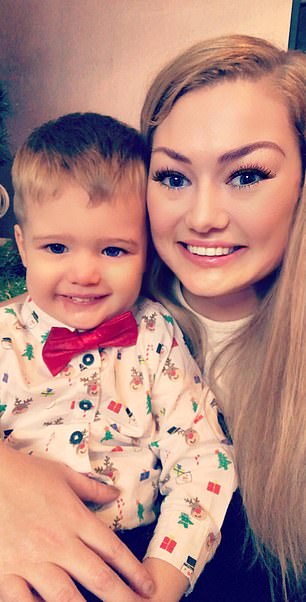 His heartbroken mother, Chloe Armstrong (pictured together), told how she desperately tried to save his life after discovering him unconscious on April 5 last year

Writing to housing secretary Robert Jenrick and council bosses in Tameside, Greater Manchester, he said: ‘It is a matter of concern that residential landlords are not currently subject to any obligation to inspect window coverings.

‘In my opinion action should be taken to prevent future deaths.’

A police investigation concluded there were no suspicious circumstances. No arrests were made. But the report added: ‘The investigation established the blind cord which had been installed by a previous tenant was not a functioning safety cord which would break if undue pressure was placed on it.’

Regulations were brought in 2014 meaning all blinds sold and installed must have the cords attached to the wall; have a chain break feature, or a wand-style device to open and close them.

Ms Armstrong said the broken blind cord had simply been tied back rather than removed and replaced before she moved in. She said: ‘This chain was already broken before I moved in. It shouldn’t have been there, full stop.

‘Joey would be alive now if the house had not been re-let with a faulty blind cord.’

After finding her son, Chloe dialled 999 and began giving her son lifesaving CPR she learned while working in health and safety. Paramedics arrived and Joey was admitted to the intensive care unit at Manchester Children’s Hospital.

But he died 18 days later, having suffered irreversible brain injuries.

Ms Armstrong is now training to be a paediatric nurse in her son’s memory. She intends to promote children’s first aid to help parents and carers save lives.

She said: ‘He lived so long after the accident because I knew child CPR – I did what I could to give him the best chance.

‘The doctors said that he wouldn’t have had a chance otherwise.

‘Joey was so funny. He was very, very clever. He could have a conversation with you at two years old. He was very polite – he always said please and thank you.’

The coroner recorded a conclusion of accidental death. There have been at least 35 toddler deaths connected to blind cords since 2001, according to figures from the Royal Society for the Prevention of Accidents (RoSPA).

Baby Rifky Grossberger died in Hackney, north London, when tragedy struck in July 2019. The inquest heard that her parents were ‘unaware’ of the lethal dangers of the metal blind cord and had thrown away the instruction leaflet.

A RoSPA spokesman said: ‘Blinds might look harmless enough, but to a young child the looped cords can be deadly if they get them caught around their neck. ‘Most accidental deaths involving blind cords happen in the bedroom and occur in children aged between 16 months and 36 months, with the majority happening at around 23 months.’

Jenny Ward, chief executive of the Lullaby Trust said: ‘The sudden death of a baby or young child is something no parent or relative can prepare for, and any following inquests can be incredibly emotional.

‘No two people experience grief in the same way, but it’s important to remember that you are not alone.

‘At The Lullaby Trust we offer a free listening service where bereaved family members can speak with one of our support advisors who will listen non-judgmentally and be there to support you for as long as you need.’