Brazilian President Jair Bolsonaro has caused another international stir by claiming that COVID-19 was created as part of “biological warfare,” according to reports.

Bolsonaro has taken controversial stances throughout the pandemic, at times warring with his own governors over restrictions or speaking out and being critical of China.

His latest comments are likely to cause significant strain between the two countries, as Bolsonaro floated the theory that the virus was made in a lab, the AFP reported. 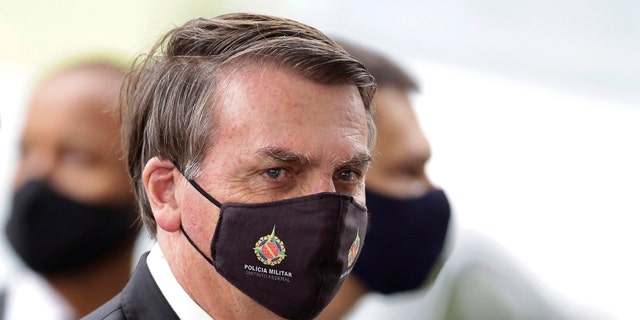 “It’s a new virus,” Bolsonaro said during a speech at Planalto Palace Wednesday in Brasilia. “Nobody knows whether it was born in a laboratory or because a human ate some animal they shouldn’t have.”

“But the military knows all about chemical, biological and radiological warfare,” he continued. “Could we be fighting a new war? I wonder. Which country’s GDP has grown the most?”

He was likely alluding to China, the only G-20 economy to grow last year, expanding by 2.3%, the South China Morning Post reported.

The comments may surprise some observers since China is Brazil’s largest trading partner.

The lab theory was struck down last month during a World Health Organization study that determined a leak from a laboratory was “extremely unlikely.” The health authority instead noted that the most likely origin was that the virus transmitted to humans from bats, though the investigation was marred by a number of criticisms.

Chief among concerns was that the Chinese authorities withheld critical data from WHO investigators, and at least one official claimed that China conducted the bulk of the investigation itself and shared its findings with the WHO investigators.

But Bolsonaro has often downplayed the severity of the coronavirus more than once. He actively encouraged his citizens to defy lockdown orders, even suggesting he might “commit a crime” and host a party.

Bolsonaro famously responded to criticism about his country’s pandemic response by saying, “So what? What do you want me to do?”

Brazil has recently seen around 3,000 deaths a day from COVID-19, with new cases only just declining over the past week following a significant second spike.

Brazil has suffered 14.9 million cases of COVID-19, with around 73,000 new cases in the past 24 hours, and around 414,000 deaths since the start of the pandemic, according to data from Johns Hopkins University.

Brazil is the third-hardest hit nation in the world, with COVID-19 responsible for one in three deaths in Brazil so far in 2021.