Brazil now has more coronavirus deaths than China as the death toll passes 6,000 while President Bolsonaro continues to dismiss the threat and encourages citizens to defy isolation orders

Many Brazilians have adhered to the government’s preventive coronavirus measures as the deadly bugged has killed and sickened more people in the South American nation than in China.

But some residents are now following President Jair Bolsonaro’s lead by completely ignoring them even as Brazil has become Latin America’s epicenter.

‘At first I thought [the shutdown] was viable. Later, I came to think we will have more economic difficulties, with the poverty there is. There should be a different way so we can be free of this,’ said Baldomero, speaking Wednesday in front of the shuttered Copacabana Palace hotel.

Egged on by Bolsonaro, who has routinely scoffed at both the virus and stay-at-home policies, Brazilians like Baldomero are heeding his call for revolt.

Divina Baldomero looked out the window at Rio de Janeiro’s Copacabana beach under a cloudless sky Wednesday and decided to take her first stroll in 40 days.

The 75-year-old restaurant owner had followed her state’s governor’s call to stay home to contain the spread of the COVID-19 pandemic, which has registered 6,017 deaths and 87,364 infections compared to China’s 4,512 deaths and 83,958 sickened people. Experts consider both figures to be significant under-counts due to a lack of widespread testing. 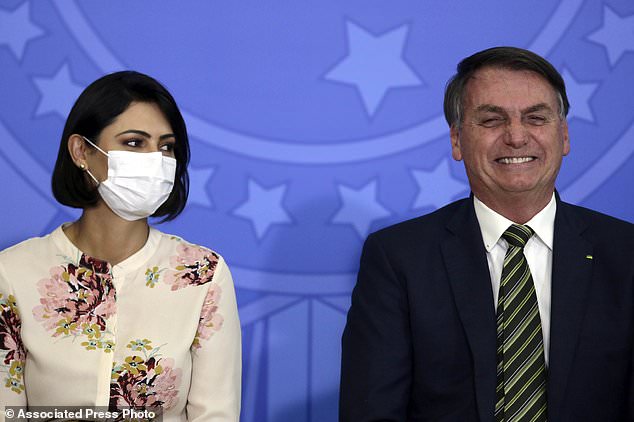 Brazil’s President Jair Bolsonaro (pictured with his wife Michelle Bolsonaro) has often minimized the coronavirus’ effect in his nation despite causing 6,017 deaths and 87,364 infections, by far eclipsing China’s totals 4,512 deaths and 83,958 sickened people 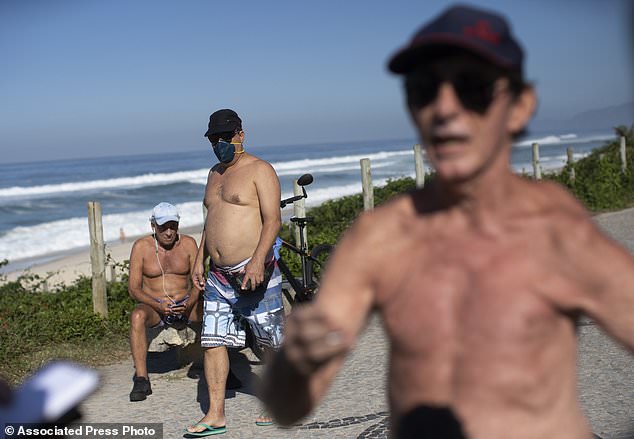 Fernando Ferreira (right), a retired dentist and lawyer, recommended reading the Bible and Albert Camus’ The Plague, citing them as evidence pandemics, like COVID-19, have always happened to some degree. He is among a long list of Brazilians who side with President Jair Bolsonaro and said restrictions on commerce are ‘absurd’ 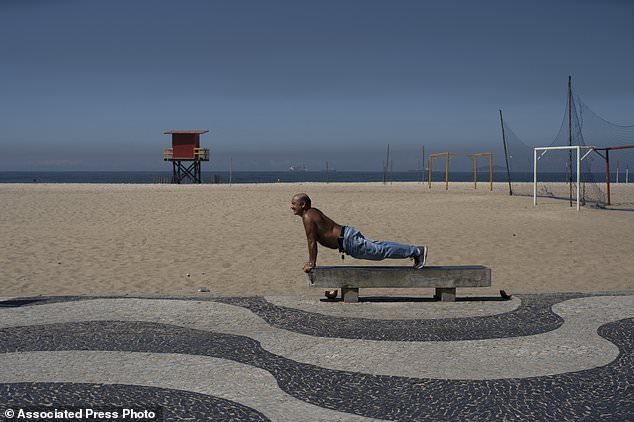 Support for isolation is faltering, particularly among the wealthy, and more people are milling and mixing.

From the sun-worshipers to the Instagram influencers and pro-Bolsonaro protesters, denial is spreading and quarantine is coming apart. But, unlike other countries looking to ease restrictions, Latin America’s largest nation is still weeks from the peak in its viral curve.

Bolsonaro argued that the economy needs to get back to work in a national address at the end of March, when he referred to the coronavirus as ‘a little flu’ and said his history as an athlete would protect him.

Since then, he has doubled down time and again, saying only high-risk Brazilians need to be isolated.

Asked about the grim milestone Bolsonaro responded, ‘So what? I’m sorry. What do you want me to do?’

Personal trainer Gabriela Pugliesi would seemingly have little reason to question risks posed by the virus. The 34-year-old was infected last month at her sister’s wedding. Several other guests also contracted COVID-19 at the five-star resort with beachfront bungalows.

Coughing and feverish – yet no less bronzed and blonde – Pugliesi repeatedly told her 4.5 million followers on Instagram to stay home and take care of themselves. She recovered in late March, and on Saturday threw a party at her apartment in Sao Paulo, the epicenter of Brazil’s outbreak. No one wore masks and in one video Pugliesi posted, she and friends shouted ‘Screw life!’ into the camera.

Flouting isolation drew an immediate backlash and more than 100,000 people unfollowed her. She also lost about a dozen sponsors, who also bailed on her influencer guests.

‘My cousin is a doctor and arrived home in tears. They already have to choose who to save,’ Werneck posted on Pugliesi’s account. ‘This behavior of yours, even more so because you have so many followers … is inadmissible.’ 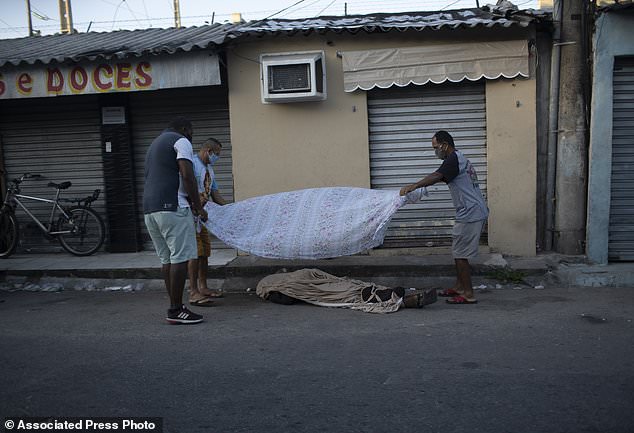 Neighbors cover the the body of Luiz Carlos Da Rocha as he lies on a street where he dropped dead Tuesday in the Rio de Janeiro slum of Alemao Complex. After more than 12 hours on the street the body of Da Rocha, who the family said suffered from epilepsy, had not been picked up by authorities. Military police said they only can remove corpses in cases of violent death 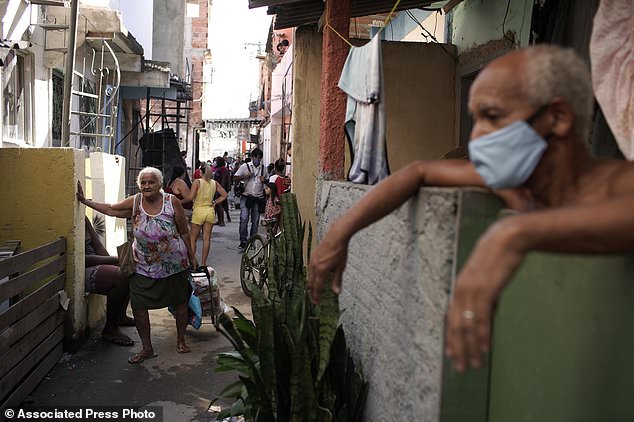 An elderly woman pulls a grocery cart filled with food donated by a non-governmental agency amid coronavirus pandemic in the Rio de Janeiro slum of Mandela. Many of the residents who are informal workers are receiving food donations as they are unable to work because of the widespread shutdowns to contain the spread of COVID-19

Others in Sao Paulo and elsewhere are defying social distancing, albeit more discreetly. Local authorities said in multiple news conferences that some bars in poor areas are welcoming clients behind closed doors, and police have been called to end gatherings in isolated spots.

On Thursday, the governor of the state of Rio de Janeiro extended restrictions on activity and gatherings until May 11. Sao Paulo had previously extended them until May 10. The two states have the largest virus incidence.

Still, a poll by Datafolha showed 52 percent of people surveyed believe even those who don’t belong to at-risk groups – the elderly and people with chronic illness – should remain in isolation, down from 60 percent at the start of the month. Among the wealthiest, support for continued quarantine is just 39 percent.

Bolsonaro’s hard-core base has staged rallies to shore up support for their leader’s views, most recently on Sunday in the capital, Brasilia. Many of the several hundred demonstrators draped themselves in the Brazilian flag, and the few face masks were in the national colors of green and yellow. Most neglected to use masks altogether, even as they shouted into a shared bullhorn.

Not all of Bolsonaro’s ministers have fallen into lock-step behind him, but those who don’t do so risk losing their jobs.

Luiz Henrique Mandetta, his former health minister, strongly supported the restrictions imposed by state governors and his handling of the crisis was widely praised. But earlier this month, Bolsonaro fired him and appointed Nelson Teich, who has said he sees eye-to-eye with the president. 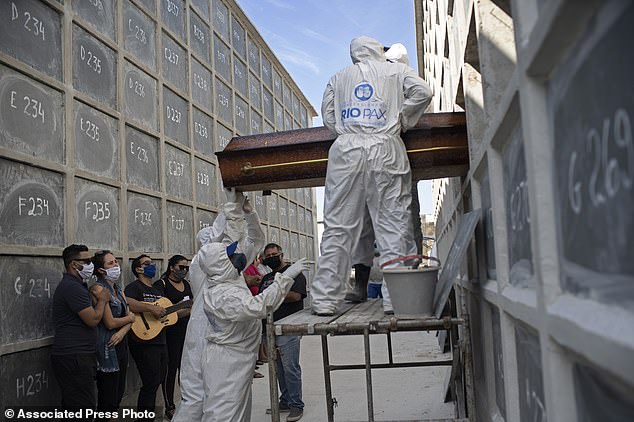 The family of Carmen Valeria watch her remains as they were placed into a niche by cemetery workers at the Iraja cemetery in Rio de Janeiro on Thursday. The family suspects the 76-year-old died from COVID-19 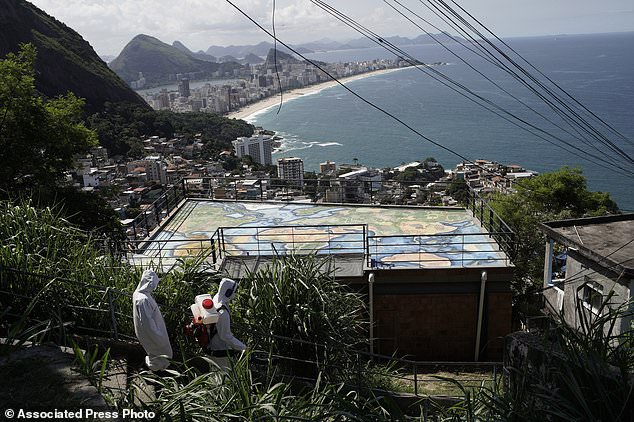 Water utility workers from CEDAE disinfect in the Vidigal favela, which overlooks the oceanfront Leblon and Ipanema neighborhoods, in an effort to curb the spread of new coronavirus in Rio de Janeiro 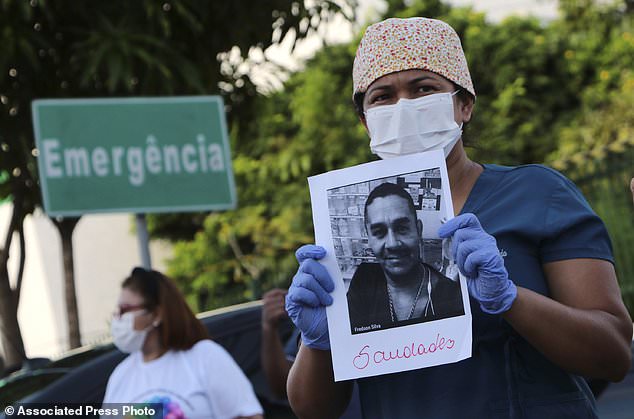 A health worker holds a photo of a person he said was his colleague, who died of COVID-19, at a protest outside ‘Pronto Socorro 28 de Agosto’ Hospital in Manaus on Monday. Cases are overwhelming hospitals, morgues and cemeteries across Brazil as Latin America’s largest nation veers closer to becoming one of the world’s pandemic hot spots

And what do the morning walkers in Copacabana and beach-side Barra da Tijuca, Rio’s two hardest-hit neighborhoods, say?

Walking along Barra, not far from Bolsonaro’s personal home, 76-year-old Fernando Ferreira, recommended reading the Bible and Albert Camus´ ‘The Plague,’ saying they are evidence that pandemics have always happened in history.

The retired dentist and lawyer said local governments’ restrictions on commerce are ‘absurd.’ He pointed to how France is moving to ease its isolation measures, without acknowledging that the European nation’s viral curve, unlike Brazil’s, has begun to plateau.

Lilia Santiago, a 51-year-old dentist, was ambling with her 77-year-old mother. She insisted forcing everyone to stay home amounts to ‘buffoonery,’ particularly as poor people in Brazil often live in close quarters under the same roof.

‘People at risk, with respiratory problems, auto-immune diseases, should take care, which doesn’t mean they can’t go out,’ Santiago said. ‘We can’t be locked inside an apartment or house. We need to circulate, but safely.’ 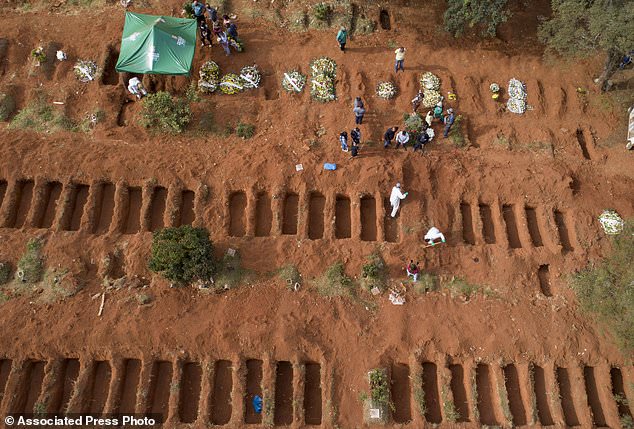 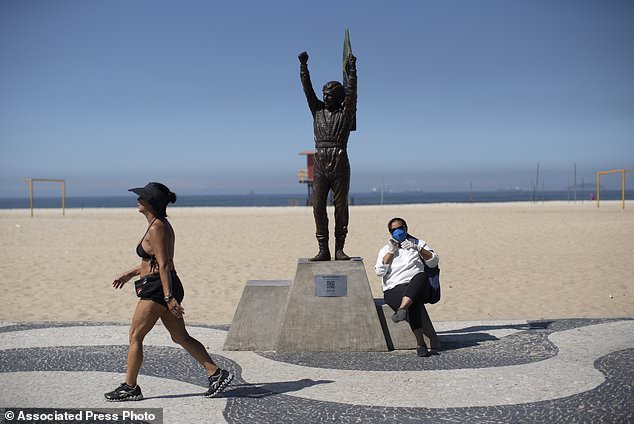 A woman walks on Copacabana Beach in Rio de Janeiro on Wednesday. Rejection of quarantine to help contain the spread of COVID-19 is evident among the people soaking up sunshine in the beachside neighborhoods of Copacabana and Barra da Tijuca 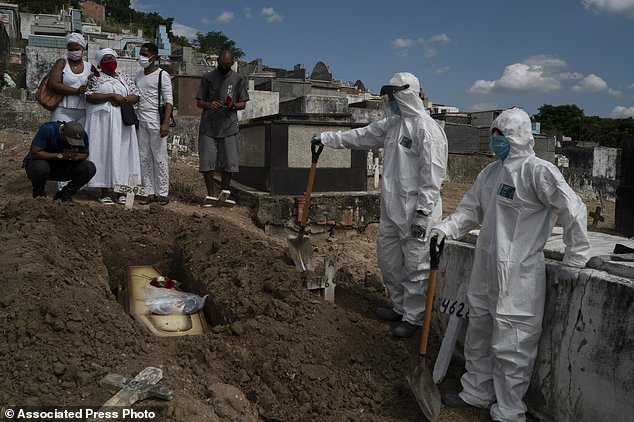 Taina dos Santos (third from left) attends Tuesday’s burial of her mother Ana Maria, a 56-year-old nursing assistant who died from the coronavirus in Rio de Janeiro. Dos Santos said that the situation in the Salgado Filho Hospital where her mother worked is complicated and that some health workers have to buy their own protective gear