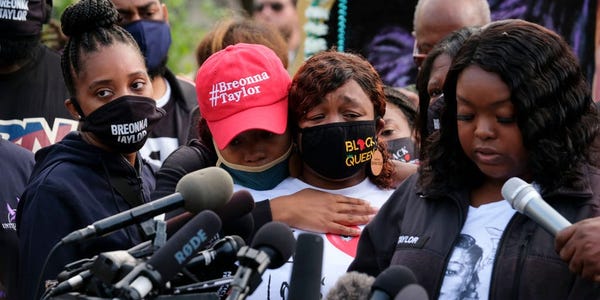 Breonna Taylor's mother Tamika Palmer said that she "never had faith" in Kentucky Attorney General Daniel Cameron to "do his job" in weighing charges for police officers involved in Taylor's killing.

In a press conference on Friday, Palmer appeared alongside the family's attorneys after a grand jury chose not to charge any of the three officers involved in a botched drug raid on March 13 where 26-year-old Taylor was shot six times and killed. Only one officer, Brett Hankinson, was charged with three counts of first-degree wanton endangerment for firing shots into a nearby apartment during the raid.

The decision, which was announced on Wednesday, sparked outrage among local activists in Louisville and set off rallies against police brutality in cities across the US.

Taylor's aunt, Bianca Austin, read a statement from Palmer at the press conference on Friday, where she said she "never had faith in Daniel Cameron to begin with."

"I was reassured Wednesday of why I have no faith in the legal system, in the police, in the laws that are not made to protect us Black and brown people," Austin said.

The family also demanded authorities release transcripts from the grand jury proceedings, along with other evidence from the case such as all body camera footage and police files, to reveal the handling of Taylor's death.

Attorney Ben Crump called on Cameron to release the transcript from the grand jury to introduce "transparency."

"If you did everything that you could do on Breonna's behalf you shouldn't have any problem whatsoever, Daniel Cameron, to releasing the transcript," Crump said at the conference.

Cameron's office throughout the week dismissed all calls for exposing the evidence, saying that "releasing that information now would compromise the federal investigation and violate a prosecutor's ethical duties."