London: In homes, offices and classrooms across Britain, an experiment is underway which might offer clues about how the world learns to live with COVID-19.

Having presided over a catastrophic shortage of tests during the dire opening days of the pandemic, Boris Johnson’s government is now plowing tens of billions of dollars into a new mass surveillance regime propped up by self-administered pregnancy test-style kits which offer a result within 30 minutes.

The tests – which come in packs of seven and can be ordered online or picked up in pharmacies, workplaces and schools – are a key plank of the United Kingdom’s plan to move out of crisis-mode. Some have even been handed out on street corners. 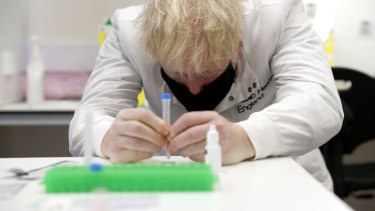 Prime Minister Boris Johnson inspects a lateral flow test during a visit to a NHS lab in Porton Down.Credit:AFP

But the so-called lateral flow tests are polarising because they are far less accurate than the gold-standard polymerase chain reaction (PCR) tests performed by professionals and sent to laboratories for analysis. Proponents concede the new devices produce false negatives or false positives but argue rapid testing is a much more pragmatic approach for those who do not have symptoms but want or need to be tested.

“The reason I’m such a fan of these tests is because there are two very, very compelling reasons for using them,” says Tim Peto, a professor of infectious diseases at the University of Oxford who last year evaluated dozens of lateral flow products hitting the market.

“One is to help control the disease, the other is to help people feel control in their lives. And the latter I think is hugely important because it empowers people to get an answer.”

Made in China by American firm Innova, the tests are simple to use: a person swabs their throat and nose, swishes the stick in liquid and pours two drops into a flat plastic reader. Two lines on the device next to the letters ‘C’ and ‘T’ indicate a positive result. Only one line next to ‘C’ represents a negative reading, and one line next to ‘T’ flags the test is void because it has not been performed correctly.

Users then scan the unique barcode on the test device to log the results with the National Health Service. They then are pinged by a text message and email which can be used as proof of a negative reading.

A person who records a positive result is instructed to get a PCR test to confirm the reading.

School students and teachers are asked to perform the tests twice a week, many employers ask staff to take a reading before they leave for work, guests at the G7 summit in Cornwall had to perform them daily, and Euro 2020 fans will only be allowed into Wembley Stadium this Sunday with proof of double vaccination or a negative lateral flow test.

When schools returned from the half-term break, 691,039 tests were taken within primary schools and nurseries in the space of a week and 1.4 million tests were distributed to secondary school students. 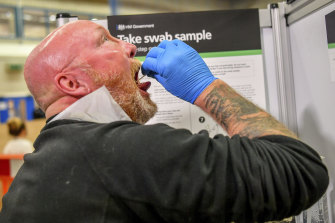 But critics argue the proponents of lateral flow tests understate the health, economic and social consequences of false positives or false negatives.

The US Food and Drug Administration this month warned the public to stop using the Innova product over “significant concerns that the performance of the test has not been adequately established, presenting a risk to health”.

The regulator said false negatives would lead to delayed diagnosis or inappropriate treatment and warned false positives could disrupt correct diagnosis of the actual cause of a patient’s illness.

It said the tests should be thrown in the garbage bin or returned to Innova via FedEx until the FDA makes a final decision on their use.

The FDA’s actions had little influence across the Atlantic. The UK’s Medicines and Healthcare Products Regulatory Agency conducted its own fresh assessment of the rapid tests after the dramatic FDA intervention and found there were no problems with continued use of the devices.

Could they eventually be rolled out widely in Australia? “Australia basically hasn’t got any illness but you’ll have scares from time to time of imported disease and the community will get into a fluster about it,” Peto says.

“If you can use lateral flow testing for people who aren’t directly exposed but worried, you can get answers soon and you immediately know if there’s a problem. It’s a very very quick way to get control over what might be causing concern.”