British nurses slammed for sharing video of Haka to coronavirus

British nurses who performed a Māori haka in a bizarre attempt to rally the public in the fight against coronavirus have been accused of being culturally inappropriate.

The health workers performed the traditional tribal war dance in a ward in the Tavistock Hospital in Devon, southwest England at the weekend.

The nurses with face paint and head tape held up pictures of the coronavirus molecule while appearing to mimic the New Zealand All Blacks rugby team.

The hospital eventually removed the video from their Twitter page after it was swamped with brutal comments slamming it as ’embarrassing’ and ‘disrespectful’.

‘This is the message we wish to affirm!’ one nurse shouts in the video.

‘You’ll never beat us, we hate you, you germ! Together we’ll triumph with strength from within!

Dozens of people re-shared the video with many questioning how the nurses had time to make the dance in the midst of the pandemic.

‘Sack these staff,’ one tweeted.

‘The Covid19 ‘haka’ by #TavistockHospital is the most bizarre, culturally inappropriate thing I’ve seen this year,’ said another.

‘The behaviour in this video is very strange and unprofessional when people are in need during virus crisis,’ said one.

‘White people doing the Haka dance.. This soooooo cringe. Please find the darkest part of the web and bury it there,’ someone tweeted. 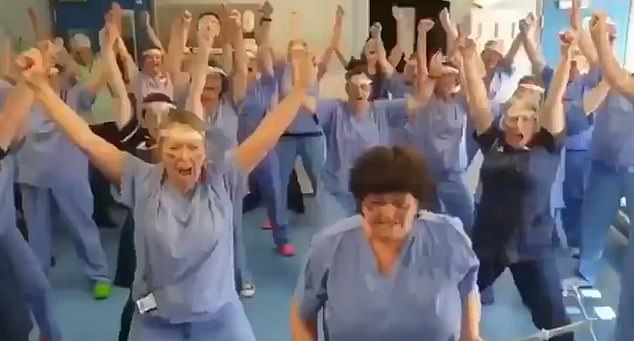 ‘What’s going on here. I thought these lot where rushed off their feet. Embarrassing!!’

‘And, they have time to dress up, choreograph, practice & film this CRINGE while toiling away in catastrophic ‘warzones’?’

But not everyone found the video offensive with a native New Zealander even labelling it as ‘one of the best’ versions he had seen.

‘A whole lot of know-it-alls that know nothing got upset calling it cultural appropriation. If anything that was one of the best haka I’ve ever seen,’ he said in a video shared on Twitter.

The nurses received some support for their attempt to inspire those impacted by the deadly virus which has killed more than 17,300 people in the UK.

‘Give them a break … High pressure job letting off a bit of steam with a bit of lunacy is great for morale and shares their hope for the future – be really worried when they stop dancing for they will have lost hope. Support #NHSheroes,’ one wrote.

‘The Tavistock Hospital haka should never have been taken down. None of those complaining knew what the were talking about and had no basis upon which to place their concerns,’ said another. 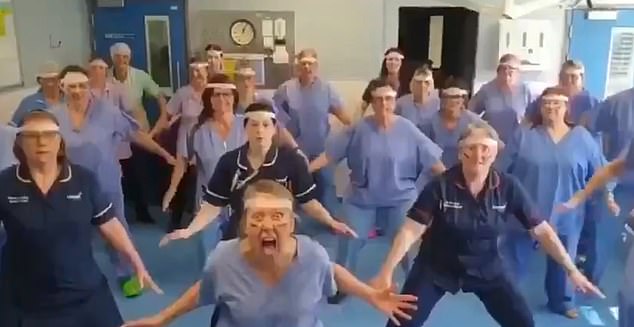